"Fforde (Early Riser) invokes John le Carré, George Orwell, and Beatrix Potter in this tongue-in-cheek political satire of systemic injustice, bureaucratic corruption, and human foibles. Peter Knox, one of the rare humans who can differentiate between individual humanoid rabbits created in the Spontaneous Anthropomorphising Event of 1965, works as a spotter in the English village of Much Hemlock. In this role, Peter secretly identifies rabbits for the United Kingdom Anti-Rabbit Party’s Rabbit Compliance Taskforce. But when Peter’s university crush, Connie, a rabbit herself, moves in next door right when the Taskforce is cooking up a plan to rehome the rabbits in a work camp, Peter falls into a tangled web of seduction, espionage, and betrayal as he’s torn between his career and a chance to do the right thing. Amid a rapid-fire barrage of literary allusions, Fforde displays his signature quick wit on a furious tour through modern British right-wing politics. Playful, biting, and timely, this is a must-read."--Publishers Weekly
posted by MonkeyToes (4 comments total) 4 users marked this as a favorite
Fforde is quite variable as an author, and is occasionally heavy handed on the political metaphor, as seen in this book. I didn't mind it, the Ffurry stuff notwithstanding, but it's not one of his better works, e.g. the previous one (Early Riser) was better.
posted by Marticus at 3:27 PM on June 9, 2021

Having struggled a bit with the pace and character development in Fforde's Early Riser, I wasn't sure what to expect from The Constant Rabbit, but I'm pleased to say it's brisk and humane, and that its plot--and there is lots of plot, as well as tons of action--is balanced by a moral sense. The protagonist, rabbit-spotter Peter Knox, has an internal life. He's not heroically brave, he knows he has harmed his rabbit friend in the past and in his current job, and there's a throughline about what making amends requires. Fforde's disgust with modern British right-wing politics is absolutely clear, but he also nails the banality of evil in the anti-rabbit workplace (there was at least one scene that reminded me so much of Terry Pratchett's torturers, the guys who go home to families at night and who have mugs with humorous sayings on them), and how talents can be corrupted in service to the state and how the bosses have him over a barrel about it. Peter struggles with it all in his quiet way, and he'd like to remain neutral...but he's not exactly heroic when he does choose a side, and I liked how he muddles his way through to resistance. The rabbit world-building struck me as just right: dropped in at need, but not through overwhelming digressions. In general, there's less wordplay/litplay here than in other Fforde, but that's not a bad thing because the story is so tight and quick-moving. I thought it was a great blend of his absurd universes and a very focused sense of fairness. Good ending, too (in general, I do not like the standard Big Battle Right Before the Book Ends), reflective rather than happy. I enjoy Fforde's writing; this is the first time it has felt like the whimsy is coherently in the service of a larger argument, and I am here for it.
posted by MonkeyToes at 4:00 PM on June 9, 2021 [1 favorite]

This was, personally, a very difficult book to read. Far too evocative of the toxic anti-immigrant and Brexit attitudes we've had to live through recently, and the banality of evil. It all hits close to home.

I appreciated how much show rather than tell there was. It was very confidently written and trusted the reader to follow along. The gentle shift of the main character from self-deceit, to guilt to action is handled well. And there was just enough wit and absurdity to cleanse the palate, without seeming to mock the seriousness of the issues.

And, contemporary relevance aside, at the end of the day it's still a compelling story full of twists and what-happens-nexts.
posted by Lorc at 6:51 AM on June 10, 2021 [1 favorite]

I liked this one more than Early Riser but not as much as Shades of Grey. I do struggle with stories in harsh climates, so that is part of it for sure. This feels more like Shades of Grey to me, though, perhaps because the political and social systems are much more familiar. Early Riser felt more military, whereas Grey and Rabbit are more political and I prefer that in Fforde's stories. Even in Tuesday Next, I don't enjoy the action scenes as much as the rest of the story.
posted by soelo at 9:19 AM on February 6, 2022 [1 favorite] 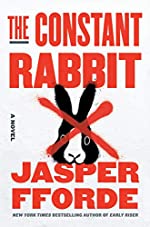