David Maurer's account of con artists running the "big con" to fleece victims in the first half of the 20th century. This non-fiction book is the basis for the movie The Sting


Luc Sante wrote the introduction to the reissue; a (possibly paywalled) version of his observations is online here.

David Maurer was a linguist, eventually professor emeritus of linguistics at the University of Louisville. He inaugurated his publishing career in 1930 with “Speech Peculiarities of the North American Fisherman” and not long after began his lifelong study of criminal and demimonde dialects. His other books include Narcotics and Narcotic Addiction (1954), Whiz Mob: A Correlation of the Technical Argot of Pickpockets with Their Behavior Pattern (1955), The American Confidence Man (a more scientific enlargement of the present book; 1974), Kentucky Moonshine (1974), and the posthumously published omnibus volume Language of the Underworld (1981).
[ . . . ]
The Big Con may be the only one of Maurer’s books that can be read for purely literary value, but whether or not this is owed to a natural ability otherwise repressed in the interest of science, it flies along as if it had written itself. The language on display certainly must have had something to do with it—available vocabulary can lubricate a subject (or, alternatively, tie weights to its shoes and throw it into the river). But the jovial demeanor, linguistic invention, and casual hyperbole of the grift establish a natural rhythm that ties accounts by retired con men, by police detectives, and by a linguist like Maurer all together into a common barstool chorus. And the slang is only part of it, although it’s hard to see how anyone could resist the joy of typing a sentence such as: “‘It’s a lot easier to just plug the roper and watch the mark light a rag,’ he laughed.” (That is, the easiest gambit is to contrive a fake shootout in which one con man apparently kills another. The mark, feeling implicated, runs away.)

posted by mark k (4 comments total) 3 users marked this as a favorite
I love this book and recommend it without reservation; it increases my appreciation for some early David Mamet films and other well done con movies. It still blows my mind that The Sting is basically non-fiction, even down to the ending scene of the scam, the one with the cackle-bladder.

That being said, it's sourced entirely from the viewpoint of the criminals and they seem to manipulate marks only through their victim's monetary greed. They come off as artists, stage managers and brilliant & clever improvisers. This is very far away from almost every modern account. It was a different time, so maybe there's more truth to it, but I'd love to know how accurate Maurer's account actually is.
posted by mark k at 11:14 PM on June 29, 2021 [1 favorite]

I loved this book - such great stories! (And of course it helped that the victims were such unsympathetic and greedy characters themselves.)
posted by Umami Dearest at 3:47 AM on June 30, 2021

Joining the chorus of praise for this book. If I were forced to condense my home library to a single box, this would go in it. Biggest takeaway: there is no game of Farro that isn’t rigged.
posted by dr_dank at 1:12 PM on June 30, 2021 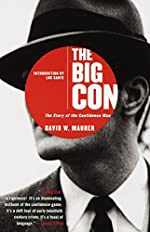