After saving the life of their heir apparent, tenacious loner Snake Eyes is welcomed into an ancient Japanese clan called the Arashikage where he is taught the ways of the ninja warrior. But, when secrets from his past are revealed, Snake Eyes' honor and allegiance will be tested--even if that means losing the trust of those closest to him.


It's too bad they didn't decide to make this a My First Real Martial Arts movie. Andrew Koji does bring some good genre energy to Storm Shadow, and the subtext is definitely there if you're into that kind of thing. Also refreshing to watch an American movie in which the entire headline cast just happens to be Asian (I do think the producers should get credit for casting Golding rather than the white guy who would've been comics-canonical). But for the most part, very bland and generic.
posted by praemunire (8 comments total)
Is the movie good, or should it be buried in a landlocked freighter on Cobra Island?
posted by StarkRoads at 10:40 AM on July 29, 2021 [2 favorites]

so much malaysian acting talent, or at least halfway decent in english medium, and we manage to export two to hollywood with no talent for actually changing accents to fit their characters... T_T
posted by cendawanita at 11:07 AM on July 29, 2021

To calibrate, I saw it again last night because I really wanted to get out of the house, I have one of those movie passes, the movie theater is nearby, I have pretty good genre tolerance, and I've already seen Black Widow four times. So...not actively painful to watch, but I doubt I would've paid for more than the price of a medium drink to see it again. The best part was Storm Shadow; if you enjoyed the Smallville story of a beautiful liar who unwillingly betrays his friend and thereby turns him into a supervillain, you might enjoy this.

The accent bloopers were...a little embarrassing. However, Malaysia should be proud of Golding's handsomeness!
posted by praemunire at 11:26 AM on July 29, 2021

Is the movie good, or should it be buried in a landlocked freighter on Cobra Island?

I liked it. It should definitely not be blown up by an Inuit mercenary with a grenade.
posted by MrBadExample at 5:45 PM on July 31, 2021 [1 favorite]

I don't know why some punch gun car movies really work for me and other punch gun car movies don't, but this one (as opposed to the John Wickses, recent Fast and Furiousi, and various Missions Impossible) just didn't land. It was great seeing non-white dudes tearing it up, and on paper it's not noticeably worse than lots of other recent things I've enjoyed, but I just felt kind of midly bored and annoyed through it.

- Wait, that's why he's called Snake Eyes? Was he just a dice roll away from being called Boxcars, or for G.I. Joe's deadliest member to be known forever as "Craps"?

- It feels like some of the fight scenes, starting with the big one in the warehouse, are... off somehow; fifty guys run into a room, and then about ten seconds of swordy swordy, and then... over? It's like there isn't enough combat in the combat. I'm not saying it has to be a grueling Old Boy scene every time there's a fight, but there's a space between "really engage with the fight" and "winkingly cut to the post-victory walk-away" and a lot of the fights felt uncomfortably in the middle.

- Of all the unintentional comedy beats, Snake's mounting rage at discovering the dice were loaded cracked me up no end. The dude murdered your dad and made you so damn mad that you effectively promised to deliver a nuclear warhead to Al Queda just to find out who killed him. The revelation that the monster who killed your father was also a dice cheat doesn't seem to be something that would push you over the top. Plus, this is why you get to be cool-assed Snake Eyes and there was never even a risk that you would have wound up naming yourself Craps, my dude. That's something to celebrate.

- On that above note, I love my dad a lot and would be real mad if he were murdered. But if the price of finding out who murdered him was delivering a nation-destroying weapon to an international cabal of superterrorists, I might be willing to let it go, or just ask my best friend who owns Japan to look into it.

- They transport sports cars with keys in the ignition and fully fueled? That seems unsafe. Maybe they were fueled by Snake Eyes' boundless rage.

- On that note, who was driving that truck? Arguably the greatest hero in the movie. Just cruising along at a constant rate of speed, straight as an arrow, while ninjas with machine guns go ham all over the back.

- Snake Eyes is supposed to be maimed that is his whole deal. I could live without the "framed for murdering the Soft Master, which is why Storm Shadow hunts him" thing, but I was kinda waiting the whole movie for the "how does it happen?" moment and it never happens. It's like watching a Spider-Man movie and by the end of the movie Uncle Ben is still kicking. It's... you can do that with your movie, I guess, but it left me feeling a bit off.

This feels unfair! I'm sure I could pick as many holes in other punch gun car movies I really enjoy. But the characterizations all felt so wildly mercurial or oversized that it never really synched up with me. I really wanted to love it, but I feel like it never quite gelled.
posted by Shepherd at 5:28 PM on August 22, 2021 [1 favorite]

Not too terrible. This is ostensibly a movie for kids so I'm not expecting any nuance from this. Nice seeing more "positive" male East Asian mainstream representation, but it's still saddled with the "kung fu fighting" stereotype and general machismo. Stephen Yuen in 'Mayhem' (2017, with Samara Weaving, who's in this) did it a bit better, but still via violence if not kung fu. (Yes, I know, this is ninjitsu, kung fu being used as a generic term)

Koji steals the show, which is totally fine. He looks much better with a goatee but he's well served for being able to pull a chameleon. Damn, but he wears clothes well and costuming threw the wardrobe at him.

Golding as Snake Eyes ... appropriately? lacks charisma. His looks remind me a bit of Karl Urban.

Aside from cannon, including being maimed/ disabled, I guess they also dropped Snake Eye's origin from the previous GI Joe movies? Golding, despite supposedly being a self taught (?) cage fighter, is a bit old to believably train to be a ninja (and missed opportunity for him to get repeatedly pants-ed by ninja kids).

Dropping Snake Eye's street-urchin-in-Japan backstory, missed opportunity to up-Americanising him (and when they did, it was juvenile... "hardon master, or whatever your name is").

The combat choreography was jejune, and a waste of what Koji could bring.

Peter Mensah was well cast and he always is able to confer a little dignity to whatever he's in.

I think that my biggest criticism is that I felt very little real bonding between Snake Eyes and Stormshadow that would reflect the depths of their enmity.
posted by porpoise at 8:32 PM on October 19, 2021 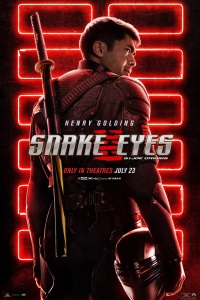