As a CODA (Child of Deaf Adults), Ruby is the only hearing person in her deaf family. When the family's fishing business is threatened, Ruby finds herself torn between pursuing her love of music and her fear of abandoning her parents. (Trailer)

"But what is surprising is the moving, even heartbreaking, way writer-director Heder tells Ruby’s story without resorting to clichéd characterizations or syrupy sentimentality." - John Anderson, Wall Street Journal

"Heder, who spent time on the Massachusetts coast when growing up, knows exactly how a narrative can be enriched by the colours, moods and customs of its setting. You get to know the Rossis very well, and they're great company. " - Sandra Hall, Sydney Morning Herald
posted by riruro (13 comments total) 3 users marked this as a favorite
I found the story formulaic but really enjoyed the performances, particularly from the deaf actors.
posted by ThePinkSuperhero at 9:33 PM on August 20, 2021 [2 favorites]

I loved it so much. It's hilarious. The acting is great. The beautiful ASL moments are beautiful. I absolutely love that so much dirty ASL (like very visually explicit stuff) is in it, that cracks me up. I want to buy this movie and rewatch it enough to learn dirty ASL. The singing is lovely. It just made me happy to watch it.

I did kind of wonder on a few things though:

(a) If the Rossis require someone on board to translate (which would be hard to find someone suitable anyway, but also they can't afford to pay anyone) and and Ruby's not going to be there, how is the business going to survive? They never answer that, do they?
(b) Isn't Gertie 17? Isn't that a bit not legal for her to be shagging Leo?
posted by jenfullmoon at 5:58 PM on August 21, 2021 [1 favorite]

I don’t think the crew member would need to translate (or they could write if needed). They’d just need to be able to hear the radio. My question is why wouldn’t she have provided the lyrics to her family before the concert?

I liked it but found it formulaic also. The teacher in a scarf, Ruby in working class plaid, jumping in the quarry. I did like her father a lot.
posted by Sukey Says at 7:04 PM on August 22, 2021

I kind of get the criticisms I've seen here and elsewhere that this is "formulaic."

But if every formulaic movie were as good as this one, I'd happily watch a thousand more formulaic movies.
posted by DevilsAdvocate at 7:04 PM on September 7, 2021 [8 favorites]

Late to the game here (as per usual). Watched this last night and loved it! The whole cast was just tremendous.

I think there was a scene towards the end that showed a new person working on the boat?
posted by obfuscation at 11:15 AM on January 8 [1 favorite]

Yeah formulaic, but winning. Some flawless performances help, and yes when she sings to the Dad, the expressions on his face, holy shit. And when he's looking around at the concert finally understanding what it really means with his daughter's singing (even though he was never the obstacle).

I can forgive it for being tidy and G-rated.

how is the business going to survive? They never answer that, do they?

They show a new person on the boat, and they also show a new truck with the logo painted on it, so it would seem the movie is telling us that Things Are Ok.
posted by fleacircus at 1:13 AM on February 15

Verrrry late to the party, but after avoiding this because I assumed it would be treacle, watched it last night. What amazing performances! Wasn't expecting the humor.
posted by cyndigo at 1:34 PM on March 14

Why is the music teacher an unmitigated asshole? How am I supposed to believe he readies a previously untrained student for acceptance to a major music school in mere months, all while treating her as a waste of his time?

Just... ugh. On paper, this situation, this story, has such potential for depth and interest and for bringing me into an experience that is so foreign to me. And yet the actual movie is little more than an "After School Special" educational yawn fest. I'm very disappointed.
posted by dnash at 8:50 PM on March 22

I'm with you dnash. If found it both formulaic and unbelievable. It was nice that they had real deaf actors and addressed a _potentally_ interesting issue, and it had some truly sweet moments, but it was so predictable and deliberately quirky it was hard to watch.
posted by CheeseDigestsAll at 8:20 PM on March 28 [1 favorite]

Why is the music teacher an unmitigated asshole? How am I supposed to believe he readies a previously untrained student for acceptance to a major music school in mere months, all while treating her as a waste of his time?

He isn't? I chose to take it that she hadn't told him that she wakes up at 3 AM to work as a deep sea fisherman before school and that she's also the person holding her family's new business together. (Which is consistent with her character; she doesn't tell anybody about her situation in any direction until it is a crisis.)

In addition to spending a ton of his own at home family time tutoring a student for free, he has a lot of other grace notes showing kindness. He learns (incorrectly, but he tries) a phrase in ASL to communicate with his student's parents. His final scene is kind of low-key great; he shows up and in very quick order: bails her out after she forgot her sheet music, then drops his graduation year, giving the secret handshake that fancy school people like to use with each other (and instantly giving her his credibility), then he fucks up so that she can start again with less nerves.
posted by Superilla at 11:40 PM on April 9 [1 favorite]

Saw this recently. I liked it overall; thought it hit all the right notes (sorry) without being formulaic. The dad was the best! Don't know this actor but I'll watch for him in future. The bit where the brother was flirting with the friend via text was pretty cute as well.

That said, I wish it had focused on the Deaf characters rather than the non-Deaf one. I get why they chose to make Ruby the protagonist (leaving the nest, super relatable!), but it did make it feel more formulaic than it might have been otherwise.

They show a new person on the boat

Wasn't that her boyfriend? He failed his audition, so I thought he was going to work for them. See also: tidy resolution, but *shrug*
posted by basalganglia at 12:47 AM on April 13 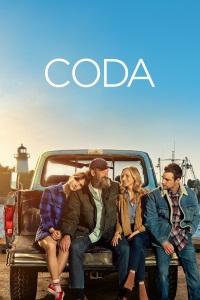