When Patrizia Reggiani, an outsider from humble beginnings, marries into the Gucci family, her unbridled ambition begins to unravel their legacy and triggers a reckless spiral of betrayal, decadence, revenge, and ultimately...murder.


If we're talking plot, this movie is actually about a really smart lawyer absolutely cleaning up. ANYWAY.

Fun, but could've been more fun if it had been willing to be a little trashier. I mean, this is legit soap opera material. Lady Gaga does a very creditable Elizabeth Taylor/Jersey girl as Patrizia.
posted by praemunire (10 comments total)
Gaga is amazing, i bet there's an oscar in it for her. Leto is UNRECOGNIZABLE. Irons is terrible. not a fan of Driver, but he does a good job. as for the story, it's only marginally accurate and everyone is pretty damn unlikeable. but it's a well-made thing and doesn't feel like 2-1/2 hours. worth the time.
posted by lapolla at 4:57 PM on November 25, 2021

I'm sort of conceptually irritated by the Leto "transformation." People who are not attractive by conventional standards exist. I do not understand why Hollywood insists on hiring beautiful people and going to elaborate lengths to make them seem homely. It's as though they think being ugly is a contagious disease and if they allow an ugly person on set, it might spread.
posted by DirtyOldTown at 6:59 AM on November 26, 2021 [11 favorites]

I'm sort of conceptually irritated by the Leto

I enjoyed it for the most part, but it's not a masterpiece by any means. Both Driver and Lady Gaga are great -- they understood what the movie was (campy story but that was still about real people) and they managed to find the right tone -- sincere but also with the drama. They're fun together here (I never found they had any sexual chemistry with each other but they still worked).

Leto and Pacino felt like they were in an entirely different movie, especially with their scenes together. Pacino faired a bit better here but Leto was so over-the-top. I wanted to have empathy for his character but his performance made it impossible. I question all the choices that went into his part in this movie.

It was paced pretty well for its length and as someone who tends to get bored with movies that are longer than 90 minutes, I appreciated that.
posted by edencosmic at 7:42 AM on November 26, 2021

It was a fun diversion for day-after-the-holiday afternoon. Driver and Gaga are very good and Leta wasn't as annoying as I'd feared. One thing that kind of bothered me was that the real events took place over almost 25 years of time and in the movie, you never really got a sense of the passage of time. They don't age either of them much or at all and Driver wears the same glasses for the whole movie.
posted by octothorpe at 4:30 PM on November 26, 2021 [2 favorites]

I do not understand why Hollywood insists on hiring beautiful people and going to elaborate lengths to make them seem homely.

It’s just playing into the Oscars/awards-bait trope of Hollywood buying it’s own mystique as a reality-transformation device, distantly related to the ‘90s trend for actors playing differently-abled characters, My Left Foot to I Am Sam and all that. (Ironically, the film that highlighted that trend also had Tom Cruise in a ton of makeup and fat suit to play an unrecognizable character.)

As far as Leto’s shtick goes, I think he might also be channeling better actors in trying to pull off the self-transformative method actor thing- see Christian Bale in The Mechanist, to Vice, for opposite extreme examples.

Ironically, Leto’s cartoonish accent might also be the film’s most accurate one.
posted by Apocryphon at 10:09 PM on November 26, 2021 [1 favorite]

I'm rather disappointed in the lack of discussion of the movie here.

Lady Gaga's performance establishes her as among the finest of cross-medium virtuosos, as a musician turned actress. There's such an intensity in her portrayal of Patrizia that it should be awards-worthy, regardless of how the actual film goes. That said, I think the film's writing or specifically characterization fails to truly explain to us the nature of her character. Why does she seek greatness, how did she come to love Gucci, and become its foremost devotee, as an adoptee? We see her start as a flirty secretary and then a seductress and then the brains and balls behind the marriage, but the movie doesn't dive into why. And while we certainly do come to realize that she does love her husband, her true feelings towards him at the start of their relationship seems ambiguous.

Likewise, it doesn't do so for Maurizio. The quiet law student is a cipher throughout the film. We do see him head-over-heels over her, willing to deny his own name to be with her. But much later on, when that love is tested and then failed, we only see the fall of the relationship through a few overt scenes- the tense argument at the cabin, the rejection of Patrizia's advances, the affair. We don't really see the build up of how he fell out of love, how he felt constrained by her ambition, and became disgusted by how she turned him against his own family. It just sort of builds up and happens, but the acting doesn't carry it through. Also, I thought Adam Driver's accent was somewhat understated and lacking, though fittingly, much later on when he divorces Patrizia and adopts the mantle as the head of Gucci, it shines through more strongly.

As stated by others, Paolo got to chew on far too much of the scenery, and his scenes could have been truncated for the film's integrity. Maybe Echelon is the new Church of Scientology because how else does Jared Leto get such leverage with such roles? As for Aldo, he got some nice initial scenes at the beginning, but it quickly devolves into him exhorting Maurizio to come to New York, and then when he does, the film quickly heads for the next turn of events.

There's a succession of three scenes with hasty dialogue: Patrizia and Mauricio in New York plotting their rise to power while you see them begin to dispute who's in charge there, followed by Aldo declaring that he is in charge and responsible for all of the success of Gucci, and then a third one that I forget- maybe it involves Paolo? - that I recall as feeling like plot glue. Rapid characterization and character development that felt like it played to cliches and tropes, and undeserved the characters.

Anyway, while those main criticisms stick strongly in my mind, I thought this was a very well-made movie that could've been better, but I'm still very pleased by some of the performances and the grandeur of it all.

If we're talking about recasting, I wonder if Paul Giamatti could have played Paolo, without the same level of makeup. And given how squat and somewhat disheveled Aldo ended up looking by the end, Danny DeVito would've made for some excellent stunt casting.

I found the movie an excellent followup to Cruella as far as campy empowering intrigue dramas about the fashion industry go, hope to see both of them along with The Devil Wears Prada in that micro-genre queue on Netflix.

As far as retro costume dramas involving Italian companies go, I'd say it makes me more excited about its brand than Ford v Ferrari does.
posted by Apocryphon at 5:21 PM on December 1, 2021 [1 favorite]

Weirdly, Cruella seemed to care a lot more about fashion-qua-fashion than Gucci did, which for the most part could've been a movie about widgets.
posted by praemunire at 7:27 PM on December 1, 2021 [2 favorites]

This was an ok watch. Maybe I'm out to lunch, but the accents just felt overblown. I kept expecting someone to say, “Mama Mia! That's-a one spicy meatball!”. The performances were fine, and I'm not usually a stickler for languages, but I'm thinking it would have been better with Italian actors speaking Italian. At least they didn't have posh English accents.
posted by 2N2222 at 9:26 PM on March 12, 2022

Tedious. Jared Leto doing his best Londo Mollari impression was entertaining but Ridley Scott needs someone to edit him. They could have cut the entire first hour of the film and lost nothing of value
posted by JDHarper at 8:08 PM on March 19, 2022 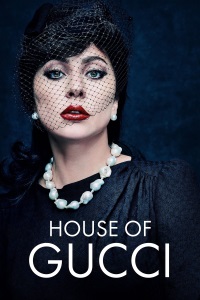