The story of two outcast sisters, Ginger and Brigitte, in the mindless suburban town of Bailey Downs. On the night of Ginger's first period, she is savagely attacked by a wild creature. Ginger's wounds miraculously heal but something is not quite right. Now Brigitte must save her sister and save herself.


Currently streaming in the US on Peacock.
posted by DirtyOldTown (8 comments total) 5 users marked this as a favorite
Just watched this for the first time last week, not what I was expecting at all. Enjoyed it! Love the title too.
posted by iamkimiam at 4:25 PM on December 26, 2021 [1 favorite]

It's also on Shudder and there is a version of it with Joe Bob Briggs commentary also on Shudder.
posted by miss-lapin at 6:20 PM on December 26, 2021 [1 favorite]

Very fond of this film. I also like the sequel.

I adore this movie and I'd enjoy talking about it here, but this thread seems like it never really took off. I will say that I feel like the sequel really did poor Bridgett dirty. The ending is straight out of Tales From the Darkside or something, and such a complex, endearing character didn't deserve such a grim, cheesy horror movie fate. They didn't bring back the screenwriter from the original film, and I think it really shows. The third movie was just baffling. But man, the original is so, so good.
posted by Ursula Hitler at 2:46 AM on January 13, 2022 [3 favorites]

I love the first movie to bits. The second one...yeah, I agree, it didn't feel fair to Bridget. I'm actually fond of the third. It's one of the rare movies that feels like fan fiction in a good way: "did you really like Ginger Snaps? were you sad Ginger died? well, here's a Ginger Snaps AU set in colonial Canada!"
posted by grandiloquiet at 12:19 PM on January 13, 2022 [1 favorite]

Emily Perkins is an interesting case. She just did not age for like 25 years, and played teens forever. She was the little girl in the It miniseries way back when, she played a kid in this and she played kids for years afterwards. (Time has since caught up with her, but only in the sense that she now looks like an adult instead of an eternal 15-year-old.) Her performance is so good in this. Bridgett is such a feral little misfit, a kid who would be a joke or a school shooter in a lesser teen movie, but here she's front and center and I just adore her.

Isabelle is great too. The movie takes Ginger on one hell of a journey and Isabelle makes every stage believable. I think the scariest moment in the whole film may be when Ginger makes a pass at Bridgett. The murders are horrible, but when she tries to get sexual with her little sister that's when we know Ginger is truly losing herself and this evil, predatory thing is taking over. Both actresses have gone on to work plenty but if they've ever been better than this, I haven't seen it.

I've never quite known what to make of Sam the drug dealer. The movie kind of keeps us guessing about whether he has feelings for Bridgett, or what her true feelings for him might be. He's way too old for her and he's a druggy burnout, but he's also kind of your classic bad boy type and he seems to truly care about her. I don't exactly get the feeling he's grooming her, but... it's a weird relationship. It rings alarm bells, at the same time they have good reason to be spending all this together while they're trying to cure Bridgett's lycanthropy.

There's a deleted scene where the Mimi Rogers mom turns herself over to the cops for the murder, so her daughters can get away. I'm kind of glad that scene got cut, because her arc is so sad already. She's kind of a goofy mom caricature out of a John Hughes film, but at the same time she's got a real soul under that. She's just so desperate for things to be nice.

Bizarre footnote: Perkins and Isabelle reunited a few years later to play the "ugly" stepsisters in some teen movie called Another Cinderella Story. I encountered it at random on cable some day and could hardly believe my eyes. The lead is Selena Gomez or somebody, and Perkins and Isabelle play these over-the-top ninnies in pink, exactly the kind of vapid, plastic-y girls that Bridgette and Ginger would have despised. The Fitzgerald sister probably would have preferred to be werewolves.
posted by Ursula Hitler at 3:02 PM on January 14, 2022 [4 favorites] 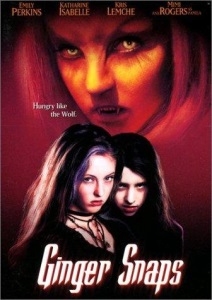