The film was originally written by feminist author Rita Mae Brown as a parody of the slasher genre but was shot as a straightforward horror film instead. As a result, it contains more humor, both intended and unintended, than usual for the genre at the time.

Directed by Amy Holden Jones. Available streaming in the US on Shudder, IMDB TV, Tubi, Plex, and Pluto TV
posted by DirtyOldTown (4 comments total) 3 users marked this as a favorite
This is a weird one. It retains some interesting satirical points/reversals of expectations (the killer feeling like his attacks represent love and flattery), plays others weirdly flat (the girls arguing baseball), plays some truly weird stuff knowingly arch (the pizza scene), and features every primary character stripping naked to change, bathing, or both, the main star doing so a combined four times.
posted by DirtyOldTown at 10:59 AM on December 30, 2021 [2 favorites]

I watched this for the first time a few years back and remember being surprised by how much I enjoyed it. It's sort of a platonic ideal of a slasher movie with all the good and bad that that entails. The origins as a parody may go a long way to explain why it contains all the beats and elements of what you'd expect from the genre.

I'm due a rewatch and at 82 minutes it does not overstay its welcome.

The sequel is BANANAS and highly recommended as the fever dream that it is. The remake looks pretty terrible and seemingly unaware that there's been nearly 4 decades of slasher movies and evolution thereof since the original.
posted by slimepuppy at 1:22 AM on December 31, 2021 [2 favorites]

The main thing I have learned from binge watching vintage slashers is that in 1983, high school students were 22-27. College students were 28-35. The average parent of a teenager was 62 years old.
posted by DirtyOldTown at 8:49 AM on December 31, 2021 [5 favorites]

I love this movie, and the recent remake is actually pretty great. It's a clever inversion of the original, and just an absolute blast. True to the roots of the series, it was also written and directed by women, too! One of the biggest surprises of 2021 for me.
posted by tomorrowromance at 11:59 AM on January 4, 2022 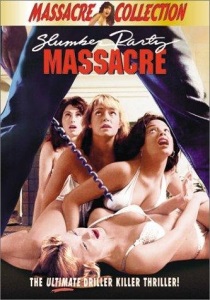