Five years after their first time-travelling adventure, Southern California rockers Bill and Ted must venture to parts they had not previously explored, including the afterlife (featuring William Sadler), to defeat a villain -- who's made impostor robots who impersonate our heroes. This film came out the same year as Keanu Reeves's Point Break, which is rather a range!
posted by brainwane (6 comments total) 3 users marked this as a favorite
Station!
posted by ActingTheGoat at 11:32 AM on June 7 [2 favorites]

I like that both Bill and Ted sequels try something significantly different. I don't think they quite capture the goofy joy of discovery that the original has going for it, but they make sure to have different creative goals rather than just cashing in on the concept of the first thing that people liked. Triumphant? Maybe. Most non-heinous, to be sure.

Also "Be Excellent To Each Other / Party On Dudes" entered my personal lexicon right away and has never been bad advice.
posted by Phobos the Space Potato at 2:21 PM on June 7 [4 favorites]

I think the scenes in Hell are where it really becomes apparent this is not an "excellent adventure".

Oh and being dead and having to possess people.
posted by fiercekitten at 4:21 PM on June 7

I usually enjoy William Sadler's work, but he is sooooo good as Death in this.
posted by Halloween Jack at 8:50 PM on June 7 [1 favorite]

My favorite scene is watching Bill and Ted possess their dads, and when they air guitar, it's acoustic.
posted by RakDaddy at 9:39 PM on June 7 [4 favorites]

I can't remember a single thing about this movie other than that Death was gnarly and fun (?).

But '91 was when I started admiring movies like 'Point Break' far over movies like 'Bill and Ted.' I must have been 13.

It's almost as if Alex Winter is a lesser William Zabka who got 'Bill and Ted 3,' perhaps on Reeve's good heartedness, instead of the Netflix series (revival of) 'The Karate Kid' in 'Cobara Kai.'

Is Zabka signed to anything in production these days?
posted by porpoise at 9:39 PM on June 7 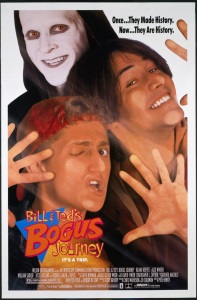