The story of the Newton gang, the most successful bank robbers in history, owing to their good planning and minimal violence.


Offbeat tale based on the true story of America's most successful bank robbers of the early 1920s, the Newton brothers from Texas, who embarked on a crime spree which spread across the US and into Canada, heisting bank vaults only at night in order not to hurt anyone.

Marjorie Baumgarten: The themes are undeniably rich and they seize our imagination to a much greater degree than the characters themselves. The actors are all excellent (McConaughey delivers his best work to date, Ulrich and Hawke both shine, Yoakam is a break-out revelation -- of the gang, only the usually remarkable D'Onofrio seems less vivid than we might ordinarily expect); they seem believable as brothers (except, of course, for Yoakam, who plays Brent Glasscock, the nitroglycerin expert and squirrely Fifth Beatle to the four Newton brothers). As characters, however, these figures just don't seem to have enough meat on their bones to sustain our interest beyond the two hours it takes for the movie to run its course. Each character has a couple of traits to play but never emerges as a fully developed person. The women in the story (played by Margulies and Webb) fare worse, having little to do but play the “love interest.” Nevertheless, The Newton Boys sparks to life in numerous other ways -- in its attention to period detail, in its elegant camerawork, in segments such as the breathtaking centerpiece montage that recounts a string of bank robberies, in the beguiling music score, and in the closing courtroom scenes that give a sense of the gang's interaction with regular folks and the institutions of state. What The Newton Boys lacks in dramatic definition, it more than compensates for with its underlying intelligence and visual luster.


Roger Ebert: And when there is action (as in a scene where they're unexpectedly chased by bank guards), it plays like a pale shadow of this film's master, "Bonnie and Clyde.'' The "B&C'' influences are everywhere: in the period, the clothes, the cars, the banjo music on the soundtrack, the reunions between brothers, the suspicions of girlfriends and even in the character of Texas Ranger Frank Hamer (Ken Farmer), who arrests the Newtons. Hamer was the Ranger forced to pose for photos with Bonnie and Clyde; to be fair, his inclusion is probably a deliberate in-joke by Richard Linklater, the director and co-writer, but the film as a whole seems drained of thrust and energy--especially compared to his earlier films.

Linklater is the talented maker of "Slackers,'' "Dazed and Confused,'' "Before Sunrise'' and the underrated "subUrbia.'' Those have all been pigeonholed as GenX movies, although there's a wide range of material. What none of them lack is energy: He's intensely involved in the lives of his characters, whether the preppies of "Before Sunrise'' or the losers hanging out in a strip-mall parking lot in "subUrbia.'' He just doesn't seem as interested in the Newton Boys. Sure, they were great bank robbers--but their very success may help explain why their legend hasn't placed as high on the charts as Dillinger, Baby Face Nelson or Pretty Boy Floyd. They were efficient professionals. And the movie sits there on the screen like a biopic of traveling salesmen who crack safes instead of prospects.

David Walsh: The Newton Boys is unusual in many ways. While advocating distrust of official society and all authority, it avoids easy cynicism. What the film communicates perhaps above all is Linklater's deep belief in the resiliency and ingenuity of human beings, his confidence in their ability to resist, by whatever means at their disposal, unfair and unjust conditions. At a time when worship of wealth is the official national ideology, Linklater advocates sympathy for the marginalized, the underdog, the exploited, the outsider. While Willis and his brothers value money and the worldly pleasures it gains them, they place an even greater premium on loyalty and trust. This is a film that expresses a belief ultimately in love and compassion and humanity.

Are there any problems? Of course.

One is an objective problem. As we discussed in our interview, Linklater apparently felt obliged to go back in history to discover characters who "fought back." Both his choice of subjects and period reflect something about our day. What sort of social struggles would an American filmmaker born in 1961 have witnessed in his adult life? The early 1980s saw a series of bitter strike struggles in which workers resisted government-backed wage-cutting and union-busting. Each of these was systematically isolated and betrayed by the trade union bureaucracy. Since that time the working class, thanks to the worthlessness of the unions and, more generally, decades of political stagnation and official anticommunism, has been unable to organize any serious resistance to the attacks on its conditions.

. . .
If one has any complaint about this new film it is the relative lack of emotional complication and spontaneity in contrast to the earlier works. The glimpse we are given of one of the more interesting pairs, Glasscock (Yoakam) and his wife Avis (Chloe Webb), for example, is tantalizingly brief. No doubt the director and screen writers wanted to be true to the historical record as they perceived it and did not want to invent difficulties where none existed. With new resources and personnel at his disposal Linklater has created an accurate and moving historical piece. The challenge inevitably confronted by every artist--and perhaps filmmakers in particular--is to come into one's own technically while retaining the intensity, originality and fascinating disorder of one's initial efforts. Linklater belongs to the select group of American film directors one has confidence will meet that challenge.

Trailer
posted by Carillon (2 comments total) 1 user marked this as a favorite
I definitely enjoyed this movie a fair bit, but wouldn't have picked up on it being from Linklater had I not known who directed it. I wish something more had come of Willis using a lot of nitro on the first safe he blows, did it work? Was it too much? Also did Glasscock invest like he said? But then he kept coming back for more, and his and Avis' motivation was pretty opaque. Was he making the nitro as well?
posted by Carillon at 2:43 PM on June 20

If you have lived in Toronto, many moves come with a sense of recognition and odd familiarity: you have seen the city stand in for New York/Chicago/Boston/London/Moscow/Tokyo/Gotham City/Delta Epsilon 9 so many times, you just take it as a given. The Newton Boys may be unique in the annals of filmdom in that it has scenes set in Toronto but shot in San Antonio, Texas. Weird. Eerie. It's like someone doing an impression of Ross Marquand or Jim Meskimen.
posted by ricochet biscuit at 7:20 PM on June 20 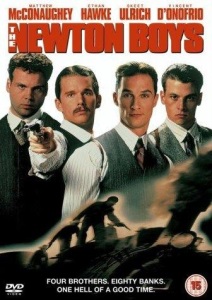