A virtuous Hong Kong Police Officer must clear his good name when the drug lord he is after frames him for the murder of a dirty cop.


An honest Hong Kong cop protecting a Triad boss's girlfriend-turned-informer, finds himself framed for the murder of a dirty cop and going on the run. The movie mixes slapstick with wild stunts and features some painful outtakes during the final credits.

Justin Chang: The only thing more perfunctory than the title of “Police Story” might be the story itself, and that’s precisely as it should be. A 1985 triumph of farce and fisticuffs that helped launch Jackie Chan as an action star beyond his already huge Asian following, this joyous movie was clearly made for an audience that likes to take its poison straight. . .

Chan himself knew that any cop-drama intrigue (devised in collaboration with co-screenwriter, Edward Tang) would be the thinnest of pretexts, a mere excuse for him to show off all the astonishing, opponent-pummeling, gravity-defying things his body could do. It should therefore come as no surprise that while “Police Story” barely coheres as a set of plot points, it completely soars as a compendium of glorious, indelible moments. It replays itself the same way in your memory, and much of it is very memorable indeed.

Chan, who co-directed the movie with Chen Chi-hwa, hurls us almost immediately into a frenzied shootout, followed by a downhill car chase that decimates a shantytown and leaves you wondering how all this could possibly be happening in the first 20 minutes. The ending is a symphony of shattered glass that turns a shopping mall into a lethal slip-and-slide playground, building to a high-wire stunt so spectacular it gets instantly replayed — twice, from different angles.

Karen Han: Chan’s work also crosses into a sublime, Buster Keaton-like territory, as it’s not just a sense of veritas when it comes to stunts that set Police Story and Police Story 2 apart. His impeccable sense for how to stage a sequence extends to simple conversations, and the films are built around what’s possible in terms of action, rather than filling in action to support the plot. One of the best scenes in Police Story has Ka-Kui juggling three phone calls at once, spinning in an office chair as he attempts to keep the cords untangled and his head on straight. There’s an effortless grace to the way he pulls it off that’s just as thrilling to watch as the film’s denouement.

Chan is also a literalist when it comes to suffering for one’s art. The final big stunt in Police Story, in which Ka-Kui slides down a several-story chandelier and crashes through several panes of glass (earning the sequence the nickname “Glass Story” amongst the crew), left Chan with second-degree burns as well as a back injury and a dislocated pelvis, but the end of the shot still sees him hopping back to his feet to continue the chase.

The scene serves a distillation of Chan’s superstardom. The actor never lies to his audience, in part because he’s more than just the films’ star. Chan is the heart and brain of the Police Story films, and the lengths he goes to in order to impress and entertain extend beyond what we see on screen; that he’s also charismatic, can flip between comedy and drama, and can pull off every stunt demanded of him, even if it may take a few tries, makes him a rarity, and the Police Story films the pinnacle of his career.

Kyle Anderson: I’m not the first one to say this: Jackie Chan is the Buster Keaton of Hong Kong cinema. Police Story has some of the most insane, acrobatic stunt sequences ever put to film, coupled with some truly zany comedic moments. It plays both like a modern police procedural and as a series of increasingly goofy vignettes. It has it all.

Chan stars as Chan Ka Kui, a police detective tasked with convincing a mobster’s secretary (Brigitte Lin) to testify in court. This follows a lengthy shootout/chase sequence that destroys a cliffside shanty village and finds Chan hanging off of a city bus by an umbrella. And that’s just the first 15 minutes. In the Ka Kui character, Jackie Chan found his version of Harold Lloyd’s likable Glasses hero. Ka Kui is a good cop, a nice guy, and someone who tries to get out of trouble as much as possible. Of course, he never does. Trouble finds him, and he usually prevails, but starting on the back foot makes each of Chan’s fights feel more tense. He could lose any time!
Jackie Chan’s POLICE STORY Is a Perfect Action Comedy_2

Much of Police Story‘s comedy comes from cartoonish rom-com set-ups. The police place the mobster’s attractive secretary under police protection, but she doesn’t want it. So Chan has another cop act as a murderer to scare her into accepting. She continually knocks the guy out while Chan tries, Weekend at Bernie’s-style, to get the fake perp to leave. Of course, Ka Kui spending so much time with a hot woman makes his actual girlfriend (Maggie Cheung) jealous. More comedy ensues, because Ka Kui would never cheat on his girlfriend.

What may be the most impressive sequence in the movie doesn’t feature any fighting at all. In fact, Chan’s the only one in the scene. After some unfortunate events, Ka Kui ends up stationed at a podunk precinct in the sticks. He agrees to watch the station while the other cops go to lunch. It’s just him, alone, in a room with six phones in it. One by one, the phones ring and Chan wheels his chair around to answer them all, bringing the receivers with him each time. Yes, he gets tangled in the cords—did you even have to ask? And does he forget which phone has which person on it? Come on, don’t pretend you don’t know this.

Like all of Chan’s efforts in Police Story, the phone sequence feels like a dance. There’s a rhythm to everything. Chan’s directorial flare is to let the action play out without too much camera movement or heavy cuts. You’ll notice if you watch any Chan film made in Hong Kong, and especially those he directed himself, that the fights unfold almost in real time. The only time he cuts is to go to an angle that will best showcase the next series of movements. Because of this, he can get each set of 4-8 movements down perfectly for that one shot before moving on to the next.

Police Story culminates in an amazing, 20-minute sequence in a shopping mall. Ka Kui is at the end of his tether. The mob has gotten away with everything because of legal loopholes and have framed our hero for the rest. It’s grim, and Ka Kui’s rage has broken through his usual “aw shucks, yes sir” demeanor. At the mall, he tracks the mobsters down one by one and beats the stuffing out of them.

Chan and his crew shot for months in the mall, driving motorcycles through it, tossing clothing wracks and furniture at each other. They pretty much utterly destroyed the place. But it’s worth it. The final, monster stunt sees Chan jump from a railing on the top floor and slide down a pole wrapped in Christmas lights all the way to the bottom floor. It’s such an impressive stunt, Chan shot it from ten different angles, and plays three of them in their entirety in the actual film.

Trailer
posted by Carillon (3 comments total) 7 users marked this as a favorite
That famous stunt in the mall is still so good. I gasped even knowing it was coming, and love the gumption to show it 3 times! I will say the music cues sometimes come across as who can have the most musical cue rather than anything subtle, and the plot is wonky. But man it does feel frenetic and balletic when everyone's in motion. Even small touches like them driving in her now ruined car on the bridge with people honking and him waving around works. It's pretty great and you can see why Jackie Chan is who he is. It can feel a bit disconcerting too being so used to the standard hollywood cutting and fight scenes to just see scenes breathe without the constant intercuts. It's nice!
posted by Carillon at 11:50 AM on July 9, 2022 [1 favorite]

I watched this one and its sequel when the popped up on the Criterion channel and I was likewise impressed that they still held up. The set pieces are still great and the plot probably better than some of the others from that era that rely more sexist humour.
posted by Ashwagandha at 5:10 AM on July 11, 2022 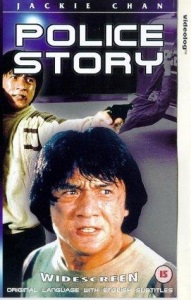