A teen (Denise Richards) learns that a scientist implanted her dead boyfriend's (Paul Walker) brain into an animatronic dinosaur.


Let's be real, if you would even consider watching this, the Rotten Tomatoes rating is irrelevant.

Currently streaming in the US on Shudder and available for digital rental on Alamo on Demand.
posted by DirtyOldTown (11 comments total) 2 users marked this as a favorite
Look friend, if I tell you this movie has Buck Flower saying, "Looks like what we have here is one of them testicular standoffs" and you don't start watching this ASAP, we are not the same.
posted by DirtyOldTown at 12:42 PM on August 6, 2022 [2 favorites]

I think that Paul walker is the boyfriend, not the mad scientist. But I’ve only listened to the bad movie podcasts about it, I actually haven’t watched the movie.
posted by WedgedPiano at 1:43 PM on August 6, 2022

Things I love about this movie:
-The villain is Terry Kiser, aka the guy who played Bernie in Weekend at Bernie's
-John Franklin (Isaac from Children of the Corn as the lab tech
-The thug's henchman Weasel is the "Aawunn Buhh?" guy from the o.g. Got Milk? ad
-The ball squeezing fight
-The Game Warden's car is apparently labelled with a sign printed onto office paper and spray adhesived onto a door
-Removing Michael's brain with a fucking jigsaw
-Nurse Helga smokes during the entire brain removal procedure
-Giving Michael a boner by poking his exposed brain
-Using the top of Michael's skull as a garbage can
-T-Rex not only makes a phone call he checks the coin return for quarters
-"I brought you a kamikaze with a vodka chaser. How you doin'?"
-Ripping off the vibrating water glass scene from Jurassic Park with beers
-T-Rex sticks out his foot and trips people fleeing
-I laughed so hard during the green screen shots of the T-Rex walking that I think my soul left my body for a moment
-"Is that his head?" "It ain't no watermelon."
-"You need me to slap the girl for you, Sheriff?"
-"Sheriff, we got two more squished bodies and a one-legged girl over there. She's still pretty good looking though."
-Testosterone Guy's literally flattened corpse
-Buck Flower. Yeah, I already mentioned him above but he's so great. His IMDB is hilarious because he has like 100+ credits and half of them are Drunk/Wino/Hobo/Rummy.
-CRYING DINOSAUR
-Tammy and her gay BFF shopping for a new body for Michael:
"Oh, it's a beautiful girl!"
"I don't want a girl."
"Honey, neither do I!"
-"Damn, that girl can ride."
-Waving a white flag that is actually Tammy's bra
-Soundtrack features "Dinosaur World" by "Simon Stokes and the Black Whip Thrill Band."
posted by DirtyOldTown at 2:15 PM on August 6, 2022 [2 favorites]

Sorry for the error in the description. That was cut and pasted from Rotten Tomatoes before I saw it.

Thai is one of the most entertaining things I have ever seen.
posted by DirtyOldTown at 2:16 PM on August 6, 2022

We have seen this at MST Club, and it's glor-endous. Especially that ending, which I've remarked before, makes it feel like the movie was written by one of H.P. Lovecraft's Mi-Go.
posted by JHarris at 4:18 PM on August 6, 2022 [1 favorite]

There is an episode of The Last Drive In with Joe Bob Briggs dedicated to this absolutely fabulous film. I found it because I am a fan of Ice Pirates (also written and directed by Stewart Raffill). If you like Tammy, give Ice Pirates a shot. Just try not to get Space Herpes.
posted by miss-lapin at 6:51 AM on August 7, 2022 [1 favorite]

Oh and DirtyOldTown if you could add a Stewart Raffill tag I would appreciate it.
posted by miss-lapin at 6:52 AM on August 7, 2022

Is this the movie where someone drills into his own brain to make good ideas happen or is that Frankenhooker?
posted by GCU Sweet and Full of Grace at 9:46 AM on August 17, 2022

That's Frankenhooker, which is Frank Hennenlotter who also did Basket Case.
posted by miss-lapin at 4:17 PM on August 18, 2022 [1 favorite] 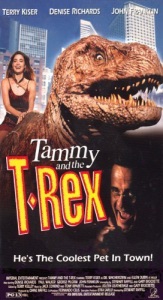