A woman struggles to find a way to live her life after the death of her husband and child.


Julie (Juliette Binoche) is haunted by her grief after living through a tragic auto wreck that claimed the life of her composer husband and young daughter. Her initial reaction is to withdraw from her relationships, lock herself in her apartment and suppress her pain. But avoiding human interactions on the bustling streets of Paris proves impossible, and she eventually meets up with Olivier (Benoît Régent), an old friend who harbors a secret love for her, and who could draw her back to reality.

There is a kind of movie in which the characters are not thinking about anything. They are simply the instruments of the plot.

And another kind of movie in which we lean forward in our seats, trying to penetrate the mystery of characters who are obviously thinking a great deal. "Blue" is the second kind of film: The story of a woman whose husband dies, and who deals with that fact in unpredictable ways.

The woman, named Julie, is played by Juliette Binoche, whom you may remember from "The Unbearable Lightness of Being" or "Damage." In both of those films she projected a strong sexuality; this time, she seems to be beyond sex, as if it no longer has any reality for her. She lives in France and is married to a famous composer, who is killed in an auto crash early in the film. Now she must pick up the pieces of her life.

She doesn't do that in the ways we think she might. She is sad and shaken, but this is not a film about a grieving widow, and, indeed, by the way she behaves we can guess things about her marriage. One of her first acts, after the initial shock wears off, is to call a man who was a colleague of both her and her husband, and seduce him. "You have always wanted me," she says. "Here I am." This sequence is not played for shock, nor does it even seem especially disrespectful to the dead husband: She seems to be testing, to see if she can still feel. She cannot. She walks out on the man and moves to the center of Paris, to what she hopes is an anonymous apartment on an anonymous street. She doesn't want to see anybody she knows. She wants to walk through the streets free of her history, her memories, her identities. She wants to begin again, perhaps - or to be free of the need to begin.

Marjorie Baumgarten: My first impression is to say that Blue is a very adult movie. By using the word “adult,” I don't mean to imply that it's off-color or unsavory or “difficult” (another word we use when we're trying to say something we're not saying). Blue is a movie that engages the mind, challenges the senses, implores a resolution, and tells, with aesthetic grace and formal elegance, a good story and a political allegory. I'm not alone in thinking so highly of Blue. It is the recipient of numerous critical accolades, one of the most distinctive being the Best Picture award and the Best Actress award for Juliette Binonche at the 1993 Venice Film Festival. Shot in France, Blue is co-scripted and directed in French by the Polish-born Krzysztof Kieslowski who last time out scored a modest arthouse success with The Double Life of Veronique. Moreover, Blue is the first part of an intended trilogy.

Tim Brayton: Blue, the color, thus represents liberty and the renunciation of liberty, at least as it's defined here, as the freedom from obligation but also, necessarily, freedom from connectivity. But anti- things are common in Three Colors, the films of which are commonly described as anti-tragedy, anti-comedy, and anti-romance, respectively. Anti-tragedy certainly fits Blue: it is theoretically about a sad event that wounds a woman, but the entire action of the film lies in Julie's act of rising out of tragedy and misery (and what is the stone-faced attempt to squash all misery by feeling nothing at all, but a complete and unconditional surrender to being miserable?), using bereavement to refocus herself. The plot describes letting go and facing forward, building new things and not harboring pain (dramatised as Julie throwing herself into the act of composition, while giving a home to her husband's mistress, the person she hates most). It is about the act of deciding what you want to write on a blank slate: the first time we see Binoche's face, is immediately after learning that Julie is now widowed; she is introduced to us as a person who has just been untied from her past self. Blue is, then, the story of how to become a new, better, more whole self, whether as a single person or an entire continent, and learning how to prevent past trauma from infecting the present. There is nothing less tragic than that.

Trailer
posted by Carillon (5 comments total) 6 users marked this as a favorite
I'm not yet 100% sure why I liked this so much, but it really resonated with me. It's definitely the camerawork, the first 20 minutes are super claustrophobic, and bring you into her reality so well, then open up as she starts cutting off everything from her life. But I think also I like the connections that get made in spite of Julie's best efforts. The creation of her and her husband that ends, the child, gets mirror and twisted with the completion of the musical piece, but also the child he had with his mistress. The metaphorical transposition of Lucille into her daughter. she's so impressed by the blue mobile, and then each father does something so unforgivable as to break them, either literally, or by showing up at the exotic dance club. I'm not sure quite what to make of the baby mice or what that's trying to express, but even that was poignant.
posted by Carillon at 5:17 PM on August 6, 2022

Some of the Paris sequences were shot next to my workplace, so I got to see Kieslowski and Binoche at work for a few days. I remember Kieslowski as very, very patient, though rigorous. Binoche had to walk up and down the rue Mouffetard more than a few times, and there is a sequence where she has to cry behind a window: Kieslowski stood close to her, and she cried and cried, again and again, until he felt the shot was perfect. Her tears looked real, not obtained using menthol, but of course that was almost 30 years ago and I may have missed the make-up/SFX person doing their job.

I found the movie beautiful and the best of the trilogy, but it's a heavy one. I love Binoche, but she fell into the Bill-Gates-5G-chips conspiracy hellhole during COVID :(

The crying sequence I described above was shot at the restaurant at the corner of rue Mouffetard and rue de l'Arbalète. The same street corner, all dressed up with 1950s-era posters and signs, was also used for Meryl Streep's Julia Child movie Julia and Julia but that set was closed to the public, so I don't have a story about Streep!
posted by elgilito at 2:26 AM on August 7, 2022 [3 favorites]

One of my all-time favorite movies, and in my opinion the strongest of the trilogy.

I've heard a lot of people say it's too intellectual, and I just think "are you kidding me?!?" It's such an intimate and emotional film.

Slawomir Idziak is such a wonderful cinematographer. I love the use of the handheld camera. It's not obtrusive, it just breathes a little and really heightens the intimacy of the film.

Zbigniew Preisner's score is amazing. It's been a while since I listened to it. I might have to wait a bit until I can listen to it without crying, I've got a couple of family members very near death right now and I don't think I could handle it.
posted by under_petticoat_rule at 9:05 AM on August 7, 2022

I remember watching this and loving it in college, and when I was visiting home the grocery store was selling off some of their old rented videotapes in plain white packages that only held the title. I recommended that my mom get it, because I liked it so much.

It turned out to be the Blue with Ricardo Montalban. She said she enjoyed it enough, but I still feel guilty about it.
posted by Quonab at 5:07 PM on August 7, 2022 [2 favorites]

I haven't watched it in a while, but I would still rank this as one of my favourite movies of all time. I agree that overall it's the strongest of the trilogy, though I do love them all.
posted by Alex404 at 7:37 PM on August 12, 2022 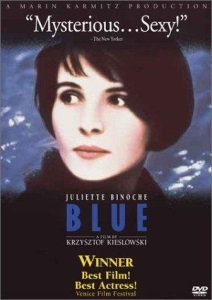