The teachers are back for development week, a time to prepare for the upcoming year; Janine is determined to start the year off right and leave her problems at home; Ava runs a side hustle out of the school parking lot.


'Abbott Elementary' is back with season two. Here’s a list of all its Philly references. from te Philadelphia Enquirer

'Abbott Elementary' takes on the world in Season 2 from IndieWire
posted by the primroses were over (15 comments total) 2 users marked this as a favorite
Strong start to the new season. I loved how everyone helped each other out; this show is hilarious, but also so kind.

Loved Jacob interpreting for Gritty.
posted by the primroses were over at 5:20 PM on September 23, 2022 [5 favorites]

This was such a great first episode. Felt like they're ramping up the social commentary (not that it was missing in any way in previous episodes). Really great to see them come in strong after their Emmy wins, which hopefully got them a few more viewers.

If you haven't seen Sheryl Lee Ralph's Emmy acceptance speech you should go and watch it now.
posted by simonw at 7:53 PM on September 23, 2022 [7 favorites]

God this show is so fucking good. It is a very hard task to be this thoughtful while also being hilarious, and they absolutely nail it.

“Sea Barbara is different from land Barbara.” Lol I about fucking died.
posted by obfuscation at 3:28 AM on September 25, 2022 [7 favorites]

I rarely laugh out loud at things--I say I do, and I'll often tell someone I lol'ed or whatever, but in truth, the most I give is a dry little chuckle or something. Every once in a great while, though, something makes me laugh so loud and so long it physically hurts, and "Sea Barbara is different from land Barbara" did it to me too. This show is just so good--it frequently gets a loud laugh out of me, but I also had to parcel out the first season suuuper slowly because the amount the teachers suffer, especially poor, hapless Janine, hurts my heart and is very hard to handle. They strike a really good balance between humor and poignancy. All their awards this year were well earned.

On the one hand, I love this show and these characters and I was so glad to see it back. It's really nice to be able to tune into a new show about Philly as my spouse and I are slowly integrating into Dutch society having just moved from South Philly. So YAY that the show is back!!

On the other hand...okay hear me out:

We have a lot of protagonists on this show, but for me, Barabara is the beating heart of the show. She's the matriarch with mad teaching chops who schools everyone else. She's the sort of moral center of the show, for me.

So when Barabara sits Gregory down in the sort of key moment of the episode, when he's been flailing with the high requirements of the school district and the profound lack of resources to get the job done? Her statement to him is more than just advice between colleagues, she's like the freaking Oracle instructing the next generation of teachers. And her big wisdom advice was:

Being a teacher is being asked to do the impossible year after year, and our only solution is to show up every day and try our best.

When I heard that line, I reflexively said out loud "WHAT?????? THAT'S TERRIBLE ADVICE!!!!"

Like, this is consent manufacturing. The only solution is to show up every day and try our best? THE ONLY SOLUTION IS THE HEROIC INDIVIDUAL EFFORT IN THE FACE OF IMPOSSIBILITY???

This scene may only work in the USA as a sincere expression of advice. Teaching the next generation of workers that the only solution to a systemic problem being individual heroics is a great way to keep an exploitative system going.

And it's made even WORSE by the fact that the writers decided to PAY THE ADVICE OFF when Gregory magically stumbles upon the ADA desks in the basement. 🙄🙄🙄 When we talk Philly schools being under-resourced, it's actually pretty fucking dire. There's not likely to be a lot of magic storage rooms with spare resources like furniture. Most Philadelphia public schools do not have libraries. A kid died of an asthma attack due to a lack of school nurses. It's bad. Deus-ex-machina magic ADA desks in the basement is kinda hacky, and we can't Individual Effort our way out of these sorts of problems.

I really hope that they are setting up a plot tension this season in which Janine, with her significant financial woes post-breakup, is going to do some organizing among the teachers and fight the district for increased wages and resources for Abbot. This would set her up nicely as a student-becoming-the-teacher moment with Barbara, showing Barbara that there is in fact more than one solution to the problem -- organizing, solidarity, direct action to name a few. Those seem like they are some of Janine's strengths, so far, and I hope we get to watch her use them.
posted by lazaruslong at 1:54 AM on September 26, 2022 [7 favorites]

While I wholeheartedly agree with the last half of your comment, I think the advice was not 'heroic effort is required', but 'forget about the expectations of anyone who is not in your classroom'. Still misses the bigger picture, though.

Deus-ex-machina magic ADA desks in the basement is kinda hacky, and we can't Individual Effort our way out of these sorts of problems.

That was the whole point of that plotline, to me: it wasn't about individual effort, it was about mutual aid. It never occurred to Barbara -- who has learned how to exist within the system (official and otherwise) -- to just dig into the basement. But Gregory, the outsider, realized that the system has leaks, and they can be... if not exploited, then at least used.
posted by Etrigan at 11:21 AM on September 26, 2022 [6 favorites]

Eh, if I squint I guess I can see how you get there..but dang if the intention was to have that be the pivotal moment which reflects Gregory's mutual aid-y resourcefulness, they sure spent like...10 seconds of camera time with it. Not exactly the payoff one might expect, more of like 2 quick cuts and a great laugh line about Mr. Johnson being "not some lil' storage-ass ho".

I do think that the framework you mention -- of Barbara not seeing some types of strategy that Gregory and hopefully Janine do see -- would be great. The magic desks in the basement didn't do it for me, but even when the plot isn't my fave the show is still so fun to watch. Bob's Burgers just came back too, and it's so nice to be with the Abbott and Burger stories again. 🏫🍔
posted by lazaruslong at 12:34 PM on September 26, 2022

The look of shock and dismay when Gregory said he didn't "get Gritty" echoed my own gasp of surprise.

Melissa speaks for us all: "It's Gritty. Hockey. Philadelphia, America. Penalty boxes."
posted by fifteen schnitzengruben is my limit at 6:08 PM on September 26, 2022 [1 favorite]

I was surprised that Gregory never pointed out that everyone else in Philadelphia also hated-slash-didn’t-get Gritty until people outside Philadelphia said What the fuck is that thing and Philly’s contrarian Only I get to talk shit about my little brother reflex kicked in.
posted by Etrigan at 6:45 PM on September 26, 2022 [6 favorites]

ahahaa it's so fucking true, Etrigan.

The 2018 philly city council resolution on Gritty was absolutely something worth reading too, for spelling out exactly that reason:

WHEREAS, Gritty’s storied arrival into Philadelphia was met with all the expected magnanimity
of a city with a reputation for colorful and ardent fans and a creative, if skeptical, media, but as
soon as Philadelphians realized non-Philadelphians were also mocking Gritty, we rose
immediately to his defense and irrevocably claimed him as our own; and


as well as many more truly wonderful paragraphs

WHEREAS, At the same time that Gritty brings people together, the divisions in our current
political and cultural life have rendered Gritty contested territory. Gritty has been widely
declared antifa, and was subject to attempted reclamation in the editorial pages of the Wall Street
Journal. It has been argued that he “conveys the absurdity and struggle of modern life under
capitalism” and that he represents a source of joyful comic respite in a time of societal upheaval;
and

WHEREAS, A man who inked Gritty’s face onto his leg captured the feelings of countless
Philadelphians: “At first, I was disgusted. I was like, what the hell is this? Why did you do this?
Why is this a thing? It was like an hour after that I fell in love with him”; and

WHEREAS, Gritty’s National Hockey League debut, featuring a bottoms-up fall onto the ice, is
a metaphor for the vulnerability that each of us face as we, too, skate onto the slippery ice that is
life; and

I honestly don't really know which, if any, is the preferred descriptor at the moment but I thought regardless it was a nice touch, showing that the writers are thinking about those things and trying to be sensitive to them. Yay Abbott!
posted by lazaruslong at 6:00 AM on September 28, 2022 [3 favorites]

Yes! I also noticed and appreciated the language about the wheelchair use.
posted by obfuscation at 4:47 PM on October 1, 2022

The only solution is to show up every day and try our best? THE ONLY SOLUTION IS THE HEROIC INDIVIDUAL EFFORT IN THE FACE OF IMPOSSIBILITY???

This is extremely American advice and something we end up dealing with every day here. Sometimes all you can do, when you have little or no support, is the best you alone can do.

Teaching the next generation of workers that the only solution to a systemic problem being individual heroics is a great way to keep an exploitative system going.

Stopping an exploitative system is....difficult, to say the least. Maybe that ends up being a plotline sometime, but I'm reminded of the Superstore union plotline and how that went. 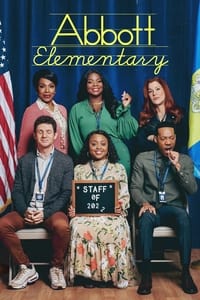