It has been eight years since Batman (Christian Bale), in collusion with Commissioner Gordon (Gary Oldman), vanished into the night. Assuming responsibility for the death of Harvey Dent, Batman sacrificed everything for what he and Gordon hoped would be the greater good. However, the arrival of a cunning cat burglar (Anne Hathaway) and a merciless terrorist named Bane (Tom Hardy) force Batman out of exile and into a battle he may not be able to win.

Auralnauts: Bane Outtakes
posted by spikeleemajortomdickandharryconnickjrmints at 9:54 AM on October 4, 2022 [5 favorites]

This movie is so weird (in mostly bad ways). The sequence with Batman & Catwoman going into the sewers to find Bane is weirdly edited, like they took a 10 minute sequence and cut it down to a 1 minute montage. The cops living in the sewers for months? Yet all still looking pretty decent when they finally get out. Then the climactic battle, with Batman leading an army of cops to take out Bane in broad daylight on the steps of City Hall or wherever the hell it was? It all seemed like scenes from different action movies that they repurposed for a Batman story. There are moments of it I like (the football field collapse is pretty epic), but it's just a mess.

It always seemed a shame that this movie hit during peak Hathaway backlash, because I thought she was a swell Catwoman. (Not as good as the Harley Quinn Catwoman, but that show really does have a gift for getting the best possible version of every character.) 87% positive on Rotten Tomatoes is absurd, though; this movie is a mess. I miss when critics were allowed to be mean about things.
posted by grandiloquiet at 2:40 PM on October 4, 2022 [5 favorites]

A good friend of mine pointed out how weird it is that of all the voices Tom Hardy could have chosen for Bane he decided to go with Cartoon Walrus.
posted by Parasite Unseen at 2:40 PM on October 4, 2022 [11 favorites]

It's such an odd, and oddly unengaging movie, for one that has some really promising parts: the beginning establishing that Bruce Wayne's body is already beginning to break down (which had already been the subject of serious inquiry); Bane being more than a steroid-enhanced luchador (although not as interesting as the version that Gail Simone wrote in her Secret Six run); in particular, the story in which Bane breaks Batman's back, and his coming back from that; some of Occupy Wall Street; the "No Man's Land" storyline from the comics, in which Gotham is isolated from the rest of the world; Catwoman, of course; and even a bit of Robin/Nightwing.

Maybe that's the problem--Nolan seems determined to throw any and every last idea regarding the character that he had, in order to wrap up his trilogy, and it doesn't quite mesh. In particular, Tom Hardy is so much less fun to watch than Heath Ledger (or even himself as Venom in another franchise) that, aside from the "you merely adopted _____, I was born in it" meme, about the only use that I have for his performance is imitating it when I got my CPAP machine and was getting used to the mask.
posted by Halloween Jack at 3:11 PM on October 4, 2022 [5 favorites]

Anne Hathaway's Catwoman feels like a hostage taken from a better, more enjoyable movie.
posted by DirtyOldTown at 6:47 PM on October 4, 2022 [6 favorites]

Came to post the Auralnauts video. Good call, metafilter.
posted by eustatic at 7:32 PM on October 4, 2022

This has me looking over Nolan's filmography and... I like about three of his movies. A couple others I appreciated the craft behind, though they were not really my bag. And maaaaaaaaaaaaaaaaaaaaaaaaaaaaaaaaaaan, I hated Interstellar.
posted by DirtyOldTown at 8:43 AM on October 5, 2022

DirtyOldTown: I'm totally with you on Interstellar. I've got a post somewhere on Metafilter talking about the creepy sexual politics of this movie: the secret visitor in the girl's bedroom at night that no one believes her about, which turns out to be her father; her repressed sexuality until they get the message back from him, at which point she smooches Topher Grace and falls in love; the dad outliving his daughter -- in a sense, reproducing himself through her -- then going off to raise a new family in space... yuck.
posted by Saxon Kane at 12:14 PM on October 5, 2022

I was convinced, and remain convinced, that this movie wanted to be a romcom between Batman and Catwoman, and that Bane should have been little more than the apocalypse MacGuffin that the two of them shrug their shoulders at, dispatch with ease, and go on cat-and-mousing with one another.

In part, I only felt that way because Anne Hathaway is the only good thing in this film. But it also feels like the only true way to move past the nihilistic despair of The Dark Knight. TDKR feels like an unintentional confirmation, if anything, that all the nihilism and despair is right.
posted by Tom Hanks Cannot Be Trusted at 1:12 PM on October 5, 2022 [4 favorites]

I suppose I did enjoy the restaging of the 1966 “Some days you just can’t get rid of a bomb” bit. And as noted above, the collapsing football field was dramatic. Apart from that, it is the sort of silly movie that takes itself Very Seriously Indeed.
posted by ricochet biscuit at 4:47 AM on October 6, 2022 [2 favorites]

Occupy Wall Street started September 2011, this movie was released July 2012. I remember being in the cinema watching the big scene where the cops wade into battle with a bunch of people who look like ordinary New Yorkers, in hoodies and beanies, and thinking, "I'm supposed to be rooting for the cops in this scene? This is some messed up bullshit." I think it might have been the end of me going to superhero movies.
posted by happyfrog at 2:33 AM on October 7, 2022 [1 favorite]

Batman is a fun comic and all, but at it's heart it's about a billionaire using the military industrial complex to beat up individual muggers as a solution to crime. Dark Knight even had a "sometimes mass surveillance is necessary but it's okay because it's only a temporary measure" bit.

I came to this movie from a somewhat unusual perspective, having seen the first movie more or less when it came out and then the second and third this year. So I was exposed to a bunch of memes. I dunno, Bane's voice is super distracting (not that Batman's weird harsh/deep voice isn't pretty weird). The first movie made sense as an origin story, but having decent chunks of Bane's story take place in a bizarre middle eastern prison that Bruce Wayne is then literally put in? 8 years having passed? Didn't land for me. As noted above, Catwoman would have made a much better movie, instead she is kind of shoehorned into the epic battle at the end.
posted by wnissen at 9:29 AM on October 12, 2022

Dark Knight even had a "sometimes mass surveillance is necessary but it's okay because it's only a temporary measure" bit.

I remember reading an article at the time that compared Batman to George W. Bush, essentially arguing that if you liked this movie you should support the PATRIOT Act, warrant-less wire-tapping, etc.

a bizarre middle eastern prison that Bruce Wayne is then literally put in?

Also, given how fucked up his body is and that Bane literally broke his back, he recovers pretty damn quickly. I also didn't buy that all the other inmates would be so psyched that some white dude gets dropped in, stays for a couple months, then manages to be the second person ever to escape after Talia al' Ghul. A more likely outcome is that he gets shanked first week, but I guess Bane told everyone to leave him alone so he could watch the destruction of Gotham. *shrug*
posted by Saxon Kane at 1:20 PM on October 12, 2022

I think this is a flawed but interesting movie. I don't hear people talk about this aspect of the Nolan trilogy much anymore but at the time, people would say things like, "It's so realistic! It's like how Batman would be in the real world!" Personally, I felt Nolan tipped his hand in the first five minutes of Begins by introducing the League of Shadows: these are comic book movies through and through, but use realism as an aesthetic.

As I've said elsewhere, I like how Rises shows that being Batman is bad for Bruce Wayne; a lot of goofy stuff about this movie comes from Nolan bending and breaking the narrative in service of traveling that arc. I love that Bane's prison is framed and staged like an enormous version of the well he fell into as a boy, in Begins. He's been living in that well for 30 years. He's lost touch with his humanity because he's lost his fear of death, and in order to be a real human being again-- to be Bruce Wayne for the first time-- he has to lose all his money, the gadgets and skills and physique he's so proud of, and reconnect with his fear to finally climb out of that well and become whole again.
posted by reclusive_thousandaire at 6:11 AM on October 17, 2022 [2 favorites] 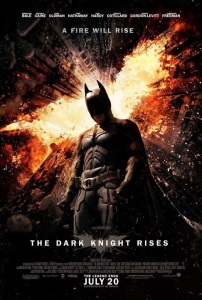