On Halloween 1987, a reporter and his crew from local independent television station WNUF28, accompanied by a Catholic priest and a pair of experienced paranormal investigators who are definitely not Ed and Lorraine Warren, entered the Webber House, site of a grisly occult-linked family slaying nearly twenty years prior, to conduct a seance and discover whether the infamous house truly is haunted.


If you're old enough to remember local indie stations from before Rupert Murdoch bought them all to bootstrap Fox into existence, WNUF Halloween Special is a nostalgic treat! The opening 20 minutes or so are the pitch-perfect local news show that airs before the special, and it's all interspersed with ads that are so true to the look, sound, and general ethos of the time that you'd hardly notice they were fakes made for the film. The casting is perfect, the Satanic Panic elements are perfect, it's just this lovely little gem from a universe one step over from ours, with occasional fast-forwarding through the commercials and the boring parts of the newscast as though it were being watched on a VHS tape. I think most horror fans would get a kick out of it but if you're at least, say, 35-40 you'll get more out of it.

It was on Shudder as recently as last night, but seems to have disappeared today.
posted by Pope Guilty (12 comments total) 3 users marked this as a favorite
It is available on blu-ray from Vinegar Syndrome I do think what's interesting is one of the thing I love now about finding stuff I taped off tv are the commercials. I deeply regret spending so much time cropping them out. It made sense at the time, but now so much nostalgia is lost!
posted by miss-lapin at 2:17 PM on October 5, 2022 [2 favorites]

It looks like this has been removed from all streaming/VOD platforms, which is a huge bummer since this has to be the month where the most people would be watching it! This is one of my favorite things of the last decade, just completely pitch-perfect in tone, and the a/v presentation is impeccable. If it remotely sounds like something folks would enjoy, I happily recommend buying the Blu-ray sight unseen. It's a great release with a nice array of special features.

In case anyone who is already a fan is not aware, you can buy the new sequel directly from director Chris LaMartina here. It's not quite up to the level of the first, but I'm basically talking about it being a 99/100 instead of 101/100. It's fantastic and super fun.
posted by tomorrowromance at 2:44 PM on October 5, 2022 [1 favorite]

I'm getting a "This title is currently unavailable in your region" message when I go to the movie's listing on Shudder.
posted by tomorrowromance at 3:29 PM on October 5, 2022 [1 favorite]

After a long time of lurking, I finally made an account so I could comment that I found this at the Internet Archive.

I've been getting great recommendations from DirtyOldTown and miss-lapin, so I thought I finally (sort of) return the favor.
posted by mrphancy at 5:05 PM on October 5, 2022 [8 favorites]

Thank you, mrphancy! I love this movie and am looking forward to seeing it again.
posted by holborne at 7:44 PM on October 5, 2022

It just occurred to me that the not-Warrens in WNUFHS being the Bergers is, oddly, a Warren Berger reference? If there's a similar connection between "DiFeo" (the family annihilation murder that inspired The Amityville Horror and seems to be the inspiration for the house in WNUFHS) and "Webber" I don't know what it is.
posted by Pope Guilty at 5:07 AM on October 6, 2022

Here we go: WNUF Halloween Special is on Internet Archive.
posted by DirtyOldTown at 7:47 AM on October 6, 2022 [3 favorites] 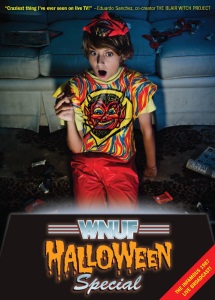