In Tuscany to promote his latest book, a middle-aged British writer meets a French woman who leads him to the village of Lucignano. While there, a chance question reveals something deeper.


While touring Tuscany, Italy, promoting his new book, English author James (William Shimell) meets French store owner Elle (Juliette Binoche), and the two hit it off, deciding to spend a free day together. They travel to a nearby town, get coffee, visit a museum and pretend to be recently married in what turns out to be a popular wedding destination. As these two strangers get to know each other, however, it becomes clear there's more to their new relationship than meets the eye.

Dana Stevens: Watching Certified Copy isn’t always a pleasurable experience, between the jarring narrative dislocation and the increasing tension between the two characters (who share the frame for nearly every second of the movie, their sense of claustrophobia echoing ours). But the movie’s shifting, at times jagged, surface keeps refracting small moments of brilliance: insights about love and marriage, art and life, falsehood and truth. The man and woman are spouses, lovers, foes, and strangers all at once, and we’re left to grapple with those simultaneously existing truths.

But the best part is that the movie never tells us this as plainly and prosaically as my last sentence just did. Though it features two epic talkers on a veritable bender of self-reflection, Certified Copy isn’t a talky, cerebral “movie of ideas.” Once you give yourself over to the admittedly demanding premise (“Here, care about these people and listen to what they say, even if you can never be quite sure who they are”), the movie delivers a real emotional punch. Kiarostami (who wrote as well as directed) isn’t fracturing the narrative for the hell of it, as a sheer display of cinematic bravado. He’s upending our expectations of what a movie character should be (a stable, identifiable persona played by one actor throughout the course of a film) in order to show us something about the movies and about life.

Laura Clifford: From this point onward, the couple behave like old marrieds, she trying to recreate the passion of their youth, he insisting on the status quo, a change naturally dictated by time - but which is the original and which the copy? The film ends with James having to make a decision - does he stay with his sexy and available wife, draped across the bed of their honeymoon hotel room or does he leave to catch the 9 p.m. train that's been waiting all day? Kiarostami's inverted approach to the dissection of a marriage recalls other films, like Harold Pinter's "Betrayal" (the original?), or even a more recent film like "The Eclipse" where a romance and a ghostly presence develops during a literary conference in Ireland. Never for a second did I feel like this couple were play acting, mainly due to the intensity of feeling, the presence of a past, conjured by the actors. Binoche, who won Best Actress at Cannes for this role, has never been more magical and mercurial on film. She finds her 'original,' the younger woman whom James fell in love with, and her spirit becomes lighter and lighter as she does. Shimell, who strongly resembles David Strathairn, is blessed with a beautiful voice and really sparks with his costar, jabbing and feinting against her seductions. Tuscany, with its romantic towns and countryside, its art and restorations, is the perfect setting for this story. The old and new are always juxtaposed, Lucignano's newlyweds countered by an aging couple, notably introduced leaving a church, and another older pair who are pulled in by Binoche to settle an argument. The women quickly agree, the man advises James on how to read his wife's desires. Time, evident throughout, bookends the film. James is introduced being late to his own lecture and left deciding on whether to be late for his train. Is the absence of self, the state of affairs she is trying to change with him, a mere copy of the real thing?

Margot Harrison: The viewer can’t be sure whether her neglectful husband actually is Miller or an absent third party who shares his aloof, cerebral attitude. But, by the time Miller starts playing along with her, it hardly matters. If his book is to be believed, the copy is as good as the original.

But it’s not the artistic artifice that makes Certified Copy worth seeing — it’s the emotional realism. Call it authenticity or what you will, but Binoche’s rage gives the movie an energy many art-house films lack. Shimell’s character may be the love of her life or just a stand-in for him, but she is the real deal.

Trailer
posted by Carillon (4 comments total) 2 users marked this as a favorite
This is really good! It tells you what it's going to do, the copy is as good as the original, and then proves it! Does it matter if they've just met or are an estranged couple? My partner's of the opinion that in some ways we're seeing their relationship, they did meet 15 years ago at a book signing, and then we're seeing them fall in love, and then out, which is very poetic. I love how it weaves in and out of making it seem like they are playing along and it being truth. Just wonderful.
posted by Carillon at 10:31 PM on October 17, 2022

I remember this movie, and thought it was pretty great as well. I should really see it again. Not much to add to the reviews, but the combination of simultaneous truths, emotional realism, and excellent performances, puts this near the top of any "cerebral drama" list.

Note to self: accumulate a list of, and watch the heck out of way more cerebral dramas (definition forthcoming). Some times I feel like I watch too much fantasy and sci-fi... but human inner life is absolutely fantastic when it can be properly brought to the screen. Who's Afraid of Virigina Woolf? and Autumn Sonata would be a couple more entries on this list, I think.
posted by Alex404 at 2:10 AM on October 18, 2022 [2 favorites]

I really liked this movie, this kind of meandering thing is very much my jam. I didn't think there was ultimately ambiguity re: their relationship though? I though it was clear they have an unconventional marriage where he is mostly living elsewhere and she's unsatisfied with that.
posted by latkes at 11:14 AM on October 18, 2022

I love Certified Copy. I love the way it subtly shifts context and changes relationship dynamics. I love the way it effortlessly drifts between languages and locations and the way time seems to move through hours and years at the same time. I love the way it crackles with life like a really good stage play does. Yet it is so much more than just two people talking, never forgetting that it is a film and not a play.
posted by forbiddencabinet at 12:44 PM on October 18, 2022 [1 favorite] 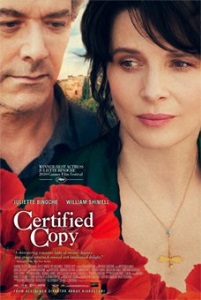