A cop investigates a string of murders committed by strangers who claim “God” told them to kill. But are the killers actually talking about the heavenly father? Or is someone pulling their strings? If Det. Nicholas (Tony Lo Bianco) really wants to know, he’ll have to descend into a netherworld of deranged faith and confront his own connection to a homicidal messiah with a perverse plan for the soul of mankind.

Can you believe I've seen this film but only vaguely remember it? Time for a rewatch!
posted by miss-lapin at 2:31 PM on October 21, 2022

Oh fyi your "justwatch" link actually goes to Rotten Tomatoes. Here's the justwatch link.Excited to see it's on Shudder so I can watch it this weekend!
posted by miss-lapin at 2:33 PM on October 21, 2022 [1 favorite]

Larry Cohen was on Gilbert Gottfried's podcast a few years ago, about a year before he (Cohen) died.
posted by rhizome at 9:26 PM on October 21, 2022 [2 favorites]

I like this picture until the third act, where I think it falls apart completely. Love Larry Cohen, though.
posted by holborne at 3:32 PM on October 23, 2022 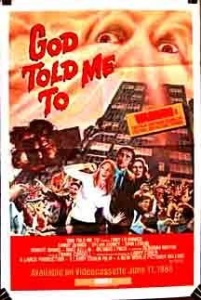