Actress Ann Darrow (Fay Wray) and director Carl Denham (Robert Armstrong) travel to the Indian Ocean to do location shoots for Denham's new jungle picture. Along the way, the actress meets and falls for rugged First Mate John Driscoll (Bruce Cabot). Upon arriving at a mysterious island, Ann is taken hostage by natives who prepare her as a sacrifice to the enormous ape Kong who rules over their jungle. But when Ann is rescued and Kong is captured, the real trouble begins.

Currently streaming in the US on HBO Max and Paramount Plus. Also available for digital rental on multiple outlets. JustWatch listing.

Because giant apes are criminally underrepresented on FanFare, I am declaring today "Giant Ape Day" and will be posting six films featuring giant apes.
posted by DirtyOldTown (9 comments total) 2 users marked this as a favorite
if you haven't seen it, please watch this!! the film is beautiful, the story is very simple, and if you are basing anything off later remakes, its less offensive/racist whatever in various ways (IMO)
posted by supermedusa at 9:49 AM on November 2, 2022 [1 favorite]

Throughout my early life, my experience with this movie was via old, dark, nasty, crappy prints and transfers, so, while I always liked the movie, I really never got the full effect. When the 2005 full restoration hit, though, it was pretty much like watching it for the first time.

The restored scenes are interesting, though I can't say they add much to the story, especially the pit of spiders and other nasties. It's obvious it was done strictly for shock value.

if you are basing anything off later remakes, its less offensive/racist whatever in various ways (IMO)

Are you sure you don't have that backwards?....I found the 1933 original to have some incredibly crude racial stereotypes, and didn't see anywhere near as much in...well, the Peter Jackson remake, which is the only remake I've really seen.

However, it's probably telling that I still enjoyed this despite them - because the visual effects may be similarly crude, but the filmmakers put so much intent behind how they animated Kong, it made up for it.
posted by EmpressCallipygos at 9:59 AM on November 2, 2022 [1 favorite]

so the original certainly has offensive racial stereotypes. the 'natives' are dark skinned, childishly simplistic, 'barbaric' whatnot.

but Jackson's version? they are terrifying, violent, cannibalistic. more 'animalistic' and degraded even than the original. that's my take anyway. certainly no version of this film is likely to win awards for its depiction of the inhabitants of Skull Island.
posted by supermedusa at 1:42 PM on November 2, 2022

Hmm. I don't remember anything about the most recent remake striking me in the racial insensitivity department, but I admit it's been a good while since I've seen it; I may soon get the chance to watch again and I'll pay a little closer attention.
posted by EmpressCallipygos at 6:10 PM on November 2, 2022 [1 favorite]

A little trivia about this movie...The animation of birds flying over the beach of Skull Island was reused in a later RKO film, Citizen Kane.
posted by Thorzdad at 3:26 AM on November 3, 2022 [1 favorite]

I seem to remember, back in ancient internet history of maybe the late 90s, there was a Fay Wray fanpage that Wray herself was aware of, had received fan emails from, and had handwritten a letter to. Can't seem to find it now.
posted by rhamphorhynchus at 6:11 AM on November 3, 2022 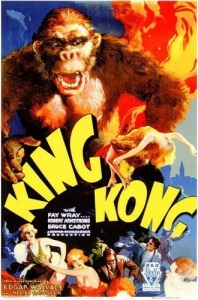