Gaira, a humanoid sea beast spawned from the discarded cells of Frankenstein’s monster, attacks the shores of Tokyo. While the Japanese military prepares to take action, Gaira’s Gargantua brother, Sanda, descends from the mountains to defend his kin. A battle between good and evil ensues, leaving brothers divided and a city in ruins.

A Japanese-American co-production. Written and directed by Ishirô Honda.

Streaming on a half dozen services in the US, most of them entirely free. JustWatch listing.

I'm sort of cheating on this one, because these aren't precisely apes, so much as ape-like monsters. But whatever. This is a fun old school monster movie.
posted by DirtyOldTown (6 comments total) 1 user marked this as a favorite
Thus concludes my six posts for Giant Ape Day. I'm open to suggestions for other themed days.

One idea I have for another themed day is Exorcism Movies Day.
posted by DirtyOldTown at 10:10 AM on November 2, 2022 [1 favorite]

Oh I would LOVE an Exorcism day. for some reason, exorcism movies really freak me out. I suppose we could do roadside attractions, twins, 2 people/pandemic, dystopia, corporate conspiracy, academia, trains (both heist and horror), and of course bad romance.
posted by miss-lapin at 3:12 PM on November 2, 2022 [1 favorite]

Trains is a great idea. Have you seen Transsiberian?
posted by DirtyOldTown at 5:19 PM on November 2, 2022 [2 favorites]

I saw this in the theater as a Saturday matinee double bill with a Godzilla movie that Wikipedia says was Monster Zero. All I remember is that there was an orange-haired monster and a green-haired monster.
posted by plastic_animals at 6:58 PM on November 2, 2022 [1 favorite]

Saw this on "Creature Double Feature" on channel 56 (UHF) when I was a kid, late 70'sish. Two monster movies, usually kaiju, but sometimes Hammer bodice rippers, every Saturday afternoon. I was a lucky child.
posted by vrakatar at 7:52 PM on November 2, 2022 [1 favorite]

Yes, giant mountain ape and giant sea ape. This was a tv staple in the 70s. I was always impressed by how quickly the Japanese domestic defense forces could deploy fantastical and specialized weaponry. Stuff that's only useful against giant monsters. Never really understood the Frankenstein angle, only finding out relatively recently this movie was a sequel to a movie I'd never seen.

The bad Gargantua eats a woman and spits out her clothes, rudely interrupts a bizarrely memorable nightclub act (a song that's been covered by Booji Boy), and reveals that he really doesn't like light, as he goes on a tear across Japan.

Only ever seen the American dub version, and have no desire to see any other. The dub version doesn't really make any reference to Frankenstein, instead referring to the monsters as Gargantuas.

Apparently, Tamblyn was an asshole to work with. And, yeah, it was double billed with Monster Zero, which also starred an American, Nick Adams, and I actually like much better.
posted by 2N2222 at 7:54 PM on November 2, 2022 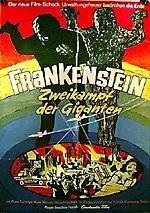