Poirot's pursuit of an infamous art thief leads him to a snowbound hotel in the Swiss Alps, where he is met with a plethora of mysteries and the reappearance of a familiar face from the past.


The Labours of Hercules was adapted into a TV film by Guy Andrews with David Suchet as Poirot as part of the final series of Agatha Christie's Poirot. The adaptation combined "The Arcadian Deer", "The Erymanthian Boar", "The Stymphalean Birds", "The Girdle of Hippolyta" and "The Capture of Cerberus" into one mystery, with "Boar" being the central one. The plots of "Deer" and "Birds" are included fairly faithfully, while only elements from the others are present.
posted by Carillon (4 comments total)
Overall a lot less of a mess than trying to adapt 12+1 shorty stories out to be. The location and filming really does a good job of upping the tension and providing a sense of dread and claustrophobia. Apparently actually filmed in England with the mountains superimposed in the background.
posted by Carillon at 11:55 AM on November 16, 2022

What is it with these male characters who fall in love instantly? The first one, I thought it was a set up to lure Poirot to this remote location (nope, just a framing device). The second guy, Waring, I thought nobody could be that much of a chump so he must be the master thief. And he was at the party. Alas, the real thief and serial killer! was entirely unconvincing. And the whole premise, that this master criminal whom nobody knows what they look like is “known” to be heading this way. This was not a gang of criminals, this was one person who’s certainly not blabbing itinerary schedules. Then there’s all the coincidental meet ups at this remote hotel: the police inspector, Waring, the Countess, again looking like a set up but no, just mashing the short story plots together. The production team did an effective job setting the “hotel” in Rochers de Naye but like The Big Four, the villain is so badly cast that the story falls apart.
posted by TWinbrook8 at 5:28 PM on November 16, 2022

I just loved David Suchot's wistful glances at the Countess, and the actress Orla Brady made her compelling in a way that I could understand his attraction and admiration. I agree the plot fell apart. Christie's Big Four stories are generally her weakest IMO. She clearly enjoyed writing thrilling spy stories at the start of her career but they weren't her strength.
posted by dorothyisunderwood at 6:45 PM on November 16, 2022

I guess the “cher Countess, we meet again” would’ve been more effective to me if I could remember their previous meeting/s. I enjoy occasional reoccurring characters, eg Flambeau in the Father Brown mysteries and he is memorable. Sherlock Holmes had “That Woman”, Irene Adler, and she was only in one story but was referred to at least one other time and she is memorable. The countess character was interesting but the mother-daughter relationship wasn’t.
posted by TWinbrook8 at 6:50 AM on November 17, 2022 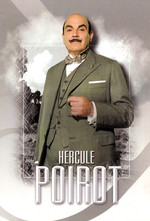