The mummified body of Imhotep is shipped to a museum in London, where he once again wakes and begins his campaign of rage and terror.


Ten years after the events of the first film, Rick (Brendan Fraser) and Evelyn (Rachel Weisz) O'Connell are settled in 1935 London, where they are raising their son. When a chain of events finds the corpse of Imhotep (Arnold Vosloo) resurrected, the O'Connells go on a desperate race to save the world from unspeakable evil and to rescue their son before it is too late.

Caroline Westbrook: Despite some neat set-pieces (highlights including a fast and furious man vs. mummy battle on a double-decker bus, and some seriously vicious pygmy mummies in the desert), the action takes too long and sags noticeably in the middle when stilted dialogue takes over from the special effects which are, unsurprisingly, the movie's real star. By the time the final reel happens along we're in familiar territory, with the CGI wizardry the audience will have paid to see unleashed in awesome, truly spectacular fashion. As crustaceans run riot and huge armies swarm the desert like marauding bugs, plot complications cease to become important and the action takes centre stage. If the rest of the movie had been so straightforward they'd have been on to a winner.

Susan Wloszczyna: Rather than an oppressive assault on the senses, these state-of-the-art effects carry the high-camp stamp of Cecil B. De Mille and the playful, even cheesy Saturday-matinee spirit of stop-motion wizard Ray Harryhausen. Evoking Harryhausen's sword-wielding skeletons are lethal legions of canine soldiers and pesky hordes of pygmy mummies. Instead of his snaky Medusa, you get the Scorpion King with lobster claws, crab legs and the chiseled torso of wrestling icon the Rock. When a tidal wave gushes forth, it's a water rush of biblical proportions à la De Mille.

Too bad the weakest link in this perpetual-motion loop-de-loop that barrels along like the boulder from Raiders of the Lost Ark remains the mummy himself. Arnold Vosloo's reconstituted corpse, Imhotep, still comes in two not-very-savory flavors, a digital crispy critter and, after sucking the life force out of his victims, a stocky chrome dome in a bad mood.

Maitland McDonagh: You can fault this noisy swashbuckler on any number of counts — unconvincing computer-generated effects, an excess of video-game-inspired fight scenes, some seriously derivative sequences — but give it this: It works its gilded butt off to give you your money's worth. More than two hours of frantic supernatural shenanigans, crammed with standard-issue mummies, chattering midget mummies, scary scarabs, moldering skeletons, supernatural dog soldiers of Anubis, pyramids, fighting girls, a flying galleon and the fearsome Scorpion King, to be precise.

Trailer
posted by Carillon (1 comment total) 1 user marked this as a favorite
Definitely seared in my memory as I was pretty much the perfect age when it came out. The effects definitely don't hold up, and I feel it definitely exoticizes its subject matter more, but it still felt fun to me. Sequelitis kicks in more in the third movie, but you can see things at the seams here a bit more. Adding a kid is fraught, even though he's better than you might expect. John Hannah is a fun sidekick/brother. Man the CGI of the Rock though, it's almost bad enough to be nostalgic.
posted by Carillon at 12:04 AM on November 17, 2022 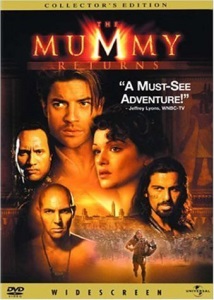