In a future beset by chaos and violence, mercenary Gibson Rickenbacker (Jean-Claude Van Damme) is charged with a mission that could change everything: protecting beautiful cyborg Pearl Prophet (Dayle Haddon). She holds the cure for a deadly disease that could destroy humanity, and must get it to scientists in Atlanta. But warlord Tremolo Fender (Vincent Klyn), fearing that his power will be undercut by peace, intends to make sure she never reaches her destination.


Cannon Films initially intended to make a sequel to the 1987 He-Man film Masters of the Universe and a live-action Spider-Man film. Both projects were planned to be shot simultaneously by Albert Pyun. Cannon, however, was in financial trouble and had to cancel deals with both Mattel and Marvel Entertainment Group, the owners of He-Man and Spider-Man, respectively. Cannon had already spent $2 million on costumes and sets for both films and decided to start a new project in order to recoup that money. Pyun wrote the storyline for Cyborg in one weekend. Pyun had Chuck Norris in mind for the lead, but co-producer Menahem Golan cast Jean-Claude van Damme. The film was shot for less than $500,000 and was filmed in 23 days. The film was shot entirely in Wilmington, North Carolina.

Several of the characters' names are references to well-known manufacturers and models of guitars and other musical instruments.

Written and directed by Albert Pyun.

Look, friend, if you're in the market for a JCVD sci-fi flick shot in three weeks with leftover sets and costumes, Rotten Tomatoes doesn't really apply.

Currently streaming in the US on Hoopla, Tubi, redbox, and Pluto. JustWatch listing.
posted by DirtyOldTown (4 comments total) 2 users marked this as a favorite
This is a particular kind of 20th century schlock that isn't something you want to get all rah-rah about from a strict qualitative sense. Nevertheless, it was highly entertaining or at least enjoyably watchable for video store nerds of a certain age at the time.
posted by DirtyOldTown at 2:51 PM on November 18 [2 favorites]

One of the very few JCVD films that I haven't seen - queued!
posted by porpoise at 8:00 PM on November 18

Several of the characters' names are references to well-known manufacturers and models of guitars and other musical instruments.

Yeah, that is weird. I've never seen the flick, but I suspect I read a newspaper review in 1989 from a reviewer who seemed unaware of this... choice.
posted by ricochet biscuit at 9:55 AM on November 19

Classic scene in this one involves.... I wanna say doing the splits in the air between two walls or something?? and then dropping down on the opponent? I'm pretty sure this is the one..
posted by some loser at 5:30 PM on November 21 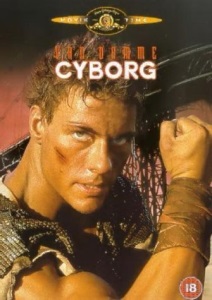