A businessman and his friends are captured by a sadistic judge and his equally odd family in a bizarre mansion in the backwoods.


While attempting to seduce gorgeous lawyer Diane Lightson (Demi Moore), wealthy gadabout Chris Thorne (Chevy Chase) agrees to drive her to Atlantic City, N.J. But, when some reckless driving draws the attention of a deeply critical cop (John Candy), they and the flamboyant "Brazillionaires" (Taylor Negron, Bertila Damas) who tagged along end up in the court of a grotesque and vengeful judge (Dan Aykroyd), who has a special vendetta against the wealthy and erudite.

Candice Russell: But this mean-spirited effort by Aykroyd proves that he cannot write an effective comedy. If he`s acting, he should leave the direction to someone else. Even with Chase, Moore and John Candy in a deadly dull dual role as a no-nonsense traffic cop and a ghoulish spinster, Nothing But Trouble is a king-size dud.

Jo Berry: Unfortunately this isnt even half as fun as the shortest bumper-car ride, with the cast  lost in a sea of unfunny situations and badly executed antique jokes on loan from The Munsters all obviously puzzled about why they are actually there.

Nick Rogers: By any objective measure, Nothing But Trouble is a calamity; at best, it’s a paltry comedy. Given the talent assembled, the surplus of dead air around its jokes is almost supernatural. When not even John Candy can make you laugh, the planet has truly tilted off its axis for a spell. And yet … and yet … the relentlessly repugnant energy here ceases to desist while you’re watching and continues to persist long after you’ve stopped, whether that is halfway through or at a perhaps bitter end. Colleagues remain angry, make that irate, that I have inflicted such an intentional irritant upon them. Not even those who rubberneck this pile-up with regret can forget it.

Trailer
posted by Carillon (16 comments total)
I'm not sure how my father and I ended up watching this, but it was such a weird, odd, fever dream that for years later we'd bring it up like, was that actually something we watched? Then found a VHS of it and I'd show it to my friends if they were ever over and we were dithering on what to watch. It's pretty terrible on a lot of axes, but they certainly went for it even if 'it' is undefined and doesn't work.
posted by Carillon at 10:33 AM on November 23, 2022 [3 favorites]

I remember watching this exactly once in high school and finding it nauseating. Last year my regular WP group watched and it was one of the few times I opted out of a movie. We've watched some waaaaaaaay out there stuff, but I just couldn't watch it again. The response was at best it was "ok" and it worst they never wanted to watch it again. Most leaned towards not liking it.
posted by miss-lapin at 10:46 AM on November 23, 2022

Tupac Shakur had joined Digital Underground just as they were about to head out on tour in support of Sex Packets, and he and Shock bonded immediately. Now, 2Pac was getting his first chance to shine on a D.U. song, and his verse announced the up-and-coming emcee in star-making fashion.
posted by Mutant Lobsters from Riverhead at 2:08 PM on November 23, 2022 [2 favorites]

Ahhh, my very first walking out of the theater movie-going experience!
posted by iamkimiam at 2:24 PM on November 23, 2022 [3 favorites]

I've never seen this movie, but I listen to a bunch of bad movie podcasts, and they all eventually have to reckon with it.
posted by Ragged Richard at 2:37 PM on November 23, 2022 [2 favorites]

Thinking of Aykroyd reminds me of something Judd Apatow once said about James Franco (before Franco was revealed to be... well, James Franco). It was something like, "He'll come to you with ten ideas, and nine will be terrible but the tenth will be brilliant in a way that nobody else could have thought of." I feel like Aykroyd is like that, times a hundred. His original drafts of Ghostbusters were infamously convoluted and weird, they were a bunch of ghost hunting outer space rangers or some damn thing, and it was up to Harold Ramis to tame it into an actual, filmable movie. This movie gave us Aykroyd pretty much unfiltered, so of course it was a huge, bizarre mess.

In a better world I think Aykroyd might have made a dozen delightfully strange little cult movies, low-budget stuff like Forbidden Zone where the whole point is to just bask in the weirdness. Instead he starred in a few mainstream comedies, made this one costly failure and then was then pretty much done. It's a real shame.
posted by Ursula Hitler at 2:53 PM on November 23, 2022 [6 favorites]

Mr. Bonestripper deserved a better movie.
I remember nothing else to like about it.
posted by Mister Moofoo at 5:27 PM on November 23, 2022

Bertila Damas once played a Vulcan weapons smuggler on Star Trek: Deep Space Nine. (That's all I got. I never saw Nothing But Trouble and this thread has cured me of whatever imp of the perverse might have led me to do so; so thank you, Carillon!)
posted by CheesesOfBrazil at 4:34 AM on November 24, 2022 [2 favorites]

UH, that was supposedly the case with Aykroyd’s original script for Blues Brothers—the size of the Chicago phone book, and unfilmable until someone else waded in with a machete.
posted by Halloween Jack at 9:01 AM on November 24, 2022 [2 favorites]

Literally the worst movie I've ever seen in my life to this day, except for the aforementioned song.
posted by jenfullmoon at 11:56 AM on November 24, 2022 [1 favorite]

I will amend my adulation for the very good Digital Underground song with the warning that the video for the very good song somehow manages to be more offensive than the very bad movie.
posted by Parasite Unseen at 12:48 AM on November 25, 2022

I still remember seeing this in the theater and thinking how overthetop strange it was, but I actually liked it. It was so freakin' strange, the big sweaty dirty baby people, John Candy playing both genders, and just the general whacko nature of it all. I enjoyed Ackroyd's judge and the whole Bermuda Triangle of New Jersey type feel of where famous/not so famous people just vanished.

Back when movie studios sent actual printed press kits with actual glossy promo photos, we received a press kit for a weird-looking movie called “ Valkenvania” at the office of the college newspaper I worked on. And then for some longer-than-I-remember period of time that movie never showed up in the theater until eventually “Nothing But Trouble” did. According to the Wikipedia article for the movie, the delay in releasing the movie was only a couple of months. Sure seemed longer.
posted by Ranucci at 10:10 PM on November 28, 2022 [1 favorite] 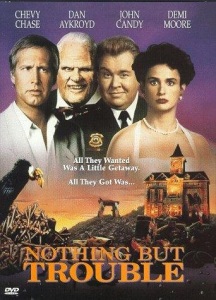