[TRAILER] Based on the Broadway play of the same name, this comedy finds widower Tony Manetta (Frank Sinatra) struggling to own and operate a Miami hotel, but dreaming of opening a new Disneyland... in Florida!. (The film pre-dates Walt Disney World by 12 years). Irresponsible in both business and romance, Tony is dedicated to his young son, Ally (Eddie Hodges), though he butts heads with his own brother, Mario (Edward G. Robinson).

Directed by Frank Capra. Screenplay by Arnold Schulman, based on his 1957 stage play of the same name. Music by Nelson Riddle.

The film introduced the song "High Hopes" by Sammy Cahn and Jimmy Van Heusen, a Sinatra standard used as a campaign song by John F. Kennedy during the presidential election the following year.

Currently streaming in the US on Hoopla, Tubi, and The Roku Channel. JustWatch listing.
posted by DirtyOldTown (1 comment total)
Frank also sings All My Tomorrows in this one.
posted by Rash at 2:04 PM on January 22 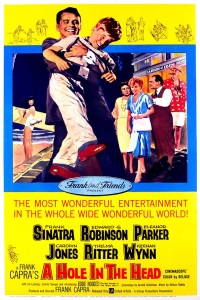