An aging New York City fruit seller named Apple Annie (May Robson) attempts to maintain an outrageous charade. Long separated from her daughter, Louise (Jean Parker), who has been raised in a Spanish convent, Annie has hidden her modest position in life by claiming in her letters to be an aristocrat. When Louise finally comes to visit, Annie enlists the help of local gangster Dave the Dude (Warren William) to pose as a Manhattan socialite, leading to antics aplenty.

Directed by Frank Capra. Written by Robert Riskin, based on "Madame La Gimp," a 1929 story in Hearst's International-Cosmopolitan, by Damon Runyon.

I was today years old when I learned that Pocketful of Miracles was a remake of this movie, and Capra directed both.
posted by RakDaddy at 3:32 PM on January 19 [1 favorite] 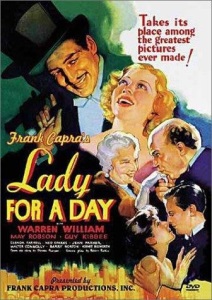