Book superstore magnate, Joe Fox and independent bookshop owner, Kathleen Kelly fall in love in the anonymity of the Internet, both blissfully unaware that he's trying to put her out of business.


Also, I would argue maybe the first example of catfishing in cinema, about 10 years before we invented the verb catfishing. It's not exactly a fake persona, but when Joe Fox realizes who he is emailing with, but doesn't fess up and in fact uses that account to further his romantic goals, it sure seems to be catfishing in spirit. Kathleen should have been pissed at the big reveal, but I guess in 1998 were a lot more innocent and naive about online relationships.
posted by COD (14 comments total) 2 users marked this as a favorite
I finally watched this last night. Also, kind of cute that Barnes and Noble, I mean Fox Superstores, were the big bad back then. I don't think many bibliophiles are upset about a surviving B&N in the neighborhood today.
posted by COD at 1:41 PM on January 22 [2 favorites]

Based on a movie which was based on a play which also served as the basis for a movie musical and a stage musical, and while the movie adaptation of the stage musical was cancelled, the non-musical movie was successfully adapted as a stage play.
posted by kyrademon at 2:11 PM on January 22 [9 favorites]

I very recently listened to the Decoder Ring episode about this. I recommend it, and they definitely go into how odd it is to look back at a time where Barnes & Noble was the big bad that was going to destroy local business.
posted by cardioid at 5:59 PM on January 22

The decoder ring episode was what inspired us to watch it last night.
posted by COD at 6:57 PM on January 22

Haha we just watched this on Friday night and I was thinking of posting! We'd just watched The Shop Around the Corner with Jimmy Stewart last month, so couldn't help but compare. It's a good film, but I think overall pales in the comparison to that movie. For one, I don't love taking a movie about workers and turning it into a movie about owners. Also the whole weird, underdeveloped plots with his grandfather/father and aunt/brother just sorta sits there. That said, Tom Hanks and Meg Ryan are pretty great, and I do enjoy it.
posted by Carillon at 9:04 PM on January 22 [2 favorites]

Barnes and Nobles (and Borders, et al) were the bad guys. They did destroy local businesses, at which point Amazon came by as the Even Bigger Fish. The reason people are glad to have a B&N remaining near them is that it's better than nothing. I'm not happy that CVS and Walgreens put all(most all) the local pharmacies out of business, but I still prefer them over having the only place to fill prescriptions be an effing Walmart.

I remember watching the film at the time and thinking that it was weird that the happy ending for the store workers was that only most of them were out of a job because the new superstore hired one of them.
posted by Karmakaze at 5:45 AM on January 23 [5 favorites]

I remember very distinctly walking out of this movie and thinking Tom Hanks is the most charming motherfucker in the world, because otherwise this movie is a straight-up psychological thriller about Patrick Bateman seducing and destroying this poor woman's livelihood.
posted by Etrigan at 5:53 AM on January 23 [8 favorites]

This year's Hallmark movie "Hanukkah on Rye" also used this exact story line, complete with a Jewish matchmaker and competing Jewish delis.
posted by ThePinkSuperhero at 9:48 AM on January 23

This kind of plotline--specifically the bit where the guy figures it out first and then gets weird and jerky about it to the girl but doesn't tell her right off--has, as kyrademon pointed out, been around for Quite Some Time.

This one is a definite buzzkill, though. Putting her beloved business out of business just plain sucks and makes it hard for you to root for the romance, and their disposable fiance SO's, well, who cares. I wanted to like this movie better than I actually did (note: I saw this on a date with an ex I met online so it seemed appropriate).

I have always thought it was kind of weird to fall in love with someone while you're writing generic emails about sharpened pencils and the like, but you have no idea on their actual personality or what they do for a living or anything at all, like that never comes up. I actually read a fantasy book, The Undertaking of Hart and Mercy, that for once gets the letter writing right in how the correspondents are somewhat specific about their jobs/locations/lives in a way where it both makes sense and isn't too vague and weird that they aren't specifying. (And the letters are legit full of personality and delightful.) If you like that kind of plotline and can deal with alt-universe stuff, I'd highly recommend that book.
posted by jenfullmoon at 10:04 AM on January 23 [2 favorites]

This kind of plotline--specifically the bit where the guy figures it out first and then gets weird and jerky about it to the girl but doesn't tell her right off--has, as kyrademon pointed out, been around for Quite Some Time.

Interestingly, in Shop Around the Corner, the guy figures it out and, after a little teasing, is about to tell her, but she's then crushingly rude to him (for Reasons), so he doesn't. He probably should tell her, but...you understand why he didn't. It's so sad I had to demote the film from the frothy NYE's movie viewing list even though there's a happy ending.
posted by praemunire at 10:12 AM on January 23

At the time irl B&N only cared about books as a product.

I had a staff member tell me that the loudspeaker used to contact staff elsewhere in the store--while an author tried to give a reading-- was "a necessary evil".

The indie Tattered Cover's former location in Denver's Cherry Creek neighborhood had been a department store. Author readings there went over the speakers.
posted by brujita at 12:17 PM on January 23

@jenfullmoon - Thanks for that recommendation of The Undertaking of Hart and Mercy, have added it to my to-read list.
posted by COD at 12:35 PM on January 23 [1 favorite]

This is Love Podcast, Episode 56: You’ve Got Mail

"Delia Ephron has worked on some of the most famous romantic comedies of all time – like Sleepless in Seattle, and You’ve Got Mail – alongside her sister, Nora Ephron. In You’ve Got Mail, two people fall in love over email. Decades after writing that screenplay, Delia Ephron found herself in the middle of a very similar story. “I really did think I’d fallen into my own romantic comedy.”
posted by mmmbacon at 6:40 AM on January 24 [2 favorites] 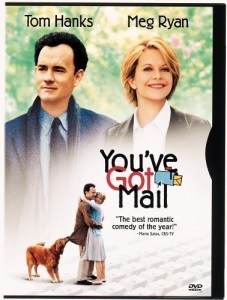