When a military general inherits a toy making company and begins making war toys, his employees band together to stop him before he ruins the name of Zevo Toys forever.


Toys is the highly underrated (ok, maybe not) 1992 starring Robin Williams as the child-like and irresponsible son of a toy company owner. Knowing his son is incapable of running a business, the father instead leaves the company to his Army General brother--played by a snide and sinister Michael Gambon, who quickly starts creating war machines operated by children! Robin Williams and his friends and creations must battle for the future of the company!

Also starring: Robin Wright as the love interest, Joan Cusack as the eccentric sister (a robot!!!), LL Cool J as Michael Gambon's son/Williams' cousin (and in one memorable scene, a couch!), with smaller roles played by Yeardley Smith (Lisa Simpson), Debi Mazar, and Jamie Foxx. Not to mention a bunch of crazy toys.

Reviews were, shall we say, mixed. Entertainment Weekly gave it a straight up F, while a more forgiving Roger Ebert gave it 2.5 stars. The LA Times also hated it, but provides some good background and a summary. The NYT makes note of the sets and other visual elements--the movie was nominated for Oscars for Art Direction and Costume Design. And The AV Club deems it a "fiasco."

On the other hand, the movie does have some devoted fans, or at least people who appreciate some elements. Here is a nice defense from a blog I'm not otherwise familiar with. And Kotaku points out the prescience of the war machines.

Maybe part of the problem was the marketing. Robin Williams was certainly concerned, wanting to minimize his presence in the Aladdin marketing so as not to draw away potential viewers. That didn't really happen.

The soundtrack does have a sweet Thomas Dolby song! Featuring Williams and Cusack.

This was director Barry Levinson's second time working with Williams, after Good Morning Vietnam. He would work with him again on Man of the Year. Levinson remembers Robin Williams.

Not available for streaming--DVDs are available through Netflix and Amazon.
posted by leesh (11 comments total) 6 users marked this as a favorite
This movie makes no sense.
posted by infinitewindow at 8:42 AM on January 31, 2015 [3 favorites]

Also has a song by Wendy & Lisa.

Yes, I LOVED this movie when it came out--I had an old VHS copy for years. I do love that Wendy and Lisa song and apologize for not posting a link. :)

Add me to the small but loyal group who enjoyed it BECAUSE it was so weird. If it were remade today as totally CGI animation, I'll bet it'd be at least as successful as the recent dragon-less Dreamworks movies...
posted by oneswellfoop at 12:54 PM on January 31, 2015 [1 favorite]

There's a great montage in Toys in which Gambon's General character reconfigures the factory to create more space for his war toy project. Set to some driving marching music, we see Williams's character driving through the factory in a kart while Gambon pops out of doors and from around corners to tell him "I'm gonna need a little more space" as he confiscates more and more of the factory. It leads into this scene where a room literally shrinks while Williams is holding a staff meeting inside it.

My office has just started a major renovation project. Everyone has lost their offices to be downsized into cubicles, and during the planning stages, we kept hearing from the higher-ups that the cubes needed to get smaller because they needed to create more space. I've been using the "gonna need a little more space" line repeatedly when talking to co-workers about the renovation. Nobody ever gets it.
posted by Servo5678 at 2:26 PM on January 31, 2015 [6 favorites]

I distinctly remember watching this movie and realizing it made no sense, but I loved it anyways. I remember thinking it was the first totally color-blind casting I'd seen (LL Cool J's parents are both white, since his Mom, who was never seen onscreen, was said to look just like Jane Fonda), which was a great move, I thought. It really is a mess, but it's a mess with a completely particular point-of-view. I wish we still had more big-budget movies that took a chance, even if they failed on plot like this one did.
posted by xingcat at 6:22 PM on January 31, 2015

I have vague memories of really enjoying this, and IIRC an utterly venomous review for it in Leonard Maltin's Movie Guide.
posted by Gin and Broadband at 4:07 AM on February 1, 2015

This has been one of my favorite movies since I can remember. My best friend and I are constantly quoting LL Cool J from this movie whenever our food touches (which is all the time) and I've even named a computer Alsatia in the past.

I've found that Toys is a friendship litmus test. If you can at least appreciate some of its merits then we'll be able to find common ground. But if you just can't see any charm in it, or you're turned off by the absurdity, then I know not to spend more than the bare minimum of civility with you. I just don't understand people who can watch this movie and have such a strong negative reaction to it. How can you see the unfolding house or the pink elephant or LL Cool J in a golf cart in coordinating camo and not get swept away?

Apparently this movie came out in 92, which would make me 8 years old when it came out. The question is, did my parents mistakenly take me to see it in theaters and it somehow didn't scar me for life? Or did we have it on VHS later on but I watched it so much that I've retroactively applied it to my past before it existed?

I didn't see this until a few months ago. It came out when I was at uni and didn't have a lot of time for films; I think I remember bits of it showing on the big TV screen in the restaurant where I was waitressing (this was also my introduction to Seinfeld, which I didn't get to watch properly for years. But that's another story.)

I really wanted to like it. Bits of it I really do like. I love the huge, overblown sets. I loved that I picked Wendy & Lisa without knowing they'd done a song for it; ditto Tori Amos. The Thomas Dolby song does, indeed, kick ass (as does the video they make to distract the guards monitoring the surveillance cameras). I love the hills popping open and shut and the sea of grass. LL Cool J is great. Joan Cusack is brilliantly odd and gorgeous as ever. There are so many awesome bits.

But I can't get over the lack of story. I agree with Ebert that having the wind-up toys fight the war toys is really uninspired as a solution. (Although the kids playing video-game war is still as chilling as it was when I first encountered it in Ender's Game, made all the more chilling by the knowledge that future wars are likely to be fought by drones.) As a collection of surreal and beautiful and sometimes funny bits, it's too long; as a film it just doesn't hold together.

As for Williams, although he obviously has fun with the role, I think I am kind of over the child-in-man's-body thing. Especially when he is the kind of child who likes to play pranks and go for cheap pratfalls; things I never liked even when I was a child. He has moments of brilliance, like the film. But overall... I just wish it had been better.
posted by Athanassiel at 11:44 PM on February 1, 2015 [1 favorite]

The soundtrack has a beautiful soprano solo called, I think, "Alsatia's Lullabye" - no words, just "ah" in soaring melody.
posted by amtho at 8:33 AM on February 2, 2015 [2 favorites]

This movie is amazing. Beautiful colors, well-done music, and a strange tone which makes it seem like a kid's movie for adults, or an adult movie for kids.
posted by Sticherbeast at 2:13 PM on February 3, 2015 [1 favorite] 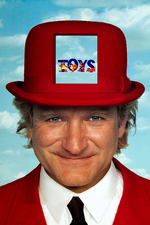