In 1981 New York, a fuel supplier tries to adhere to his own moral compass amid the rampant violence, corruption and decay that threaten his family and his business.


NY Times Review (A.O. Scott): It is clear that [Anna, played by the Oscar-nominated Jessica Chastain] can be ruthless in defense of her family’s interests, but she is also limited by the patriarchal codes of her milieu. Her role is to offer support and an occasional nudge, but unlike most crime movies, which treat wives as static, marginal figures, “A Most Violent Year” is interested in the dynamic of Abel and Anna’s marriage, which unites, sometimes uneasily, the imperatives of business and the demands of love. The movie entwines two old sayings: behind every great man there is a great woman, and behind every great fortune there is a great crime.

New Yorker Review: [T]he glory of “A Most Violent Year” lies in Chandor’s sense of how a certain corner of the world (and, by implication, a much larger portion of it) works, for ill or for good. The movie is devoted to the scrappy side of fortune-building at the end of the industrial age. (Manhattan’s towers beckon in the background of many shots.) As Abel makes his rounds, borrowing from everyone he can while trying to hold on to his pride, Chandor gives us bits of New York ethnic lore, including visits with a disarmingly mild, second-generation Mafia plutocrat (Alessandro Nivola), who has his own fleet of trucks and lives in a guarded fortress.

Vanity Fair Review: Chandor’s grim, but ultimately enthusiastic, take on all this is that no enterprise is entirely free from sin, and that the great secret of industry and economy is that corruption and collusion are necessary evils. Necessary enough to make them good, even. Abel does not become Cain by the end of A Most Violent Year, but he has at least accepted that positive ends have to be enough justification for insidious means, or else this whole free-market experiment will break down.

Oscar Isaac on his 'Powerful, Flawed' Latino Character in 'A Most Violent Year.'
posted by MoonOrb (4 comments total) 1 user marked this as a favorite
Looking forward to this - I love Chandor's Margin Call. Apparently Isaacs and Chastain are old friends.
posted by Gin and Broadband at 4:03 AM on February 1, 2015

Even though it was Chastain who came away with an Oscar nomination, I thought Oscar Isaac owned this movie and was marvelous.

Also, neat companion pieces to this movie might include things like Force of Evil, Carlito's Way, and The Drop, all of which I was reminded of at various times.

I've liked each of Chandor's movies so far. Looking forward to more to come from him. I liked how the "1981" setting in this film seemed somewhat understated; we knew it was 1981 without tons and tons of cues from the soundtrack or wardrobes of the characters (thinking here of one of my reactions to American Hustle, maybe, which felt to me like it was trying to scream "this was set in the 1970s!!!"). Though I could have done without the plethora of radio news bulletins in the backround reminding us that, in fact, 1981 must have actually been A Most Violent Year.
posted by MoonOrb at 1:24 PM on February 1, 2015 [3 favorites]

The day after watching this movie, my impression began to swing much more positively. As I see it, whole movie is a big misdirection and that's what I love about it. Abel, the "hero," is actually a stooge for the mafia, and he can't even admit it to himself, despite all the evidence piling up.

Let's recap how Abel, this "amazing businessman," becomes dominant in the oil industry. Purportedly, Abel has this incredible sales technique where you hold the customer's gaze for an uncomfortable amount of time. This is what he does when he is trying to get people to switch to his company. And this is how he trains his new employees. It's seriously all he tells his new employees: "Look the customer in the eye for a length of time that grows uncomfortable." That's it. And it works.

Hmmm... Could people be switching to his company for a different reason? Perhaps they are being strong-armed by Abel's in-laws? The mafia?

When Abel tries to tell his wife Anna that the company has grown in a wholesome, ethical manner, his wife can hardly keep a straight face. She starts to say, "You think you did this on your own?" but thinks better of it, because it's smart business to have this clueless dope as the public face of the business. (On the other hand, what's it like to have a clueless dope as your husband? A question for another review.)

The real plot of this movie happens "offstage" and you have to pay extra attention to Anna in order to realize what's really happening. For instance, when the oil company is in a huge jam, Chastain's character mysteriously comes up with 750k, and Abel barely questions where it came from.

My reading of Abel as a clueless dope opens up the possibility to read the movie as an allegory about Americans. Americans, like myself, are in a state of denial about where our success (and oil) comes from. We tell ourselves that we are the wealthiest nation on Earth because of our values: home of free, land of brave, so on, so forth. But we are like Abel, the clueless dopes providing the wholesome public face, while violent military tactics do the real work. We refuse to admit to ourselves that our success is enforced by a global military network that ruthlessly protects our economic interests. It's better not to tell us what's really going on, because then we wouldn't be able to play our role as well.
posted by Buddy_Boy at 6:56 AM on August 9, 2015 [3 favorites]

This was an okay film. It's never quite dull, but it is lacking dramatic oomph. The movie has a sense of murkiness that lingers a bit too much. It's visually murky often just in the sense of cranking up the teal and orange into a kind of ugly, poisoned-looking cobalt and ochre. It has a strangely cool little truck chase in it.

A lot seems to hinge on the supposition that having a gun without a permit is like a world-destroying kind of problem with the cops who are also not able to catch truck thieves (and could they really have stolen the truck in the traffic jam?). There's no other solution. Hiring security guys to ride with the trucks is not to be countenanced I guess.

Abel is definitely running a front for the mob, and that denial is portrayed; the mob never shows up, isn't really named, and doesn't help him in any obvious way, including for example making the oil thieves disappear. Who knows maybe Jessica Chastain did skim all that money. Abel says to his salespeople, "The hardest thing to do is look someone in the eye and tell them the truth," and this movie is a lot about people not saying things.

Abel's problems are also not as bad as Abel or the movie presents them. Losing the down payment on the terminal building wouldn't be the end of the world for him, it would just be a temporary setback in the selfish dream of someone who already has it pretty good. Albert Brooks kind of pointedly asks, "Why do you care so much?" and never seems very concerned with anything, like he knows Abel is already set for life no matter what. And yeah Abel's competitors are buying his stolen oil, but they're not coordinating it, and Abel is a threat to them, poaching their customers and planning to put them out of business.

Meanwhile he is giving only platitudes to Julian, who just wants to be like him, but the reasons he can't be cannot be named or discussed. "It just didn't work out like that. You're looking back you need to look forward." Some people could say Abel is like the embodiment of the neoliberal lie.

At the end when it's clear that Abel is going to skate and become a higher level economic player Oyelowo makes some hints of cooperative corruption, and Abel says some platitude, and I like to think Oyelowo's character was thinking, "Oh wow, does this guy actually believe his bullshit?"
posted by fleacircus at 5:04 AM on August 29, 2018 [1 favorite] 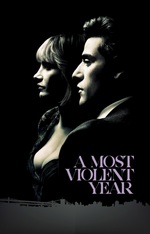