Following Dan's loss of control, Morton takes over the murder investigation. Elsewhere, Elena's mysterious past is about to catch up with her. This episode aired on February 19, 2015.


"The problem with Fortitude is the same as any other show built around a mystery: until you find out where you’re going, it’s difficult to know what to make of where you’ve been. Now, this sentiment runs counter to some critical wisdom you’ll find, which contends that the journey is what really matters and the destination, merely a single thread of an overarching tapestry, but if we’re honest with ourselves, the truth lies somewhere closer to the middle. So at this point in the show’s existence, each viewing experience is a rough recreation of Homer Simpson watching Twin Peaks. (“Brilliant! … I have absolutely no idea what’s going on.”)" - A.V. Club review

I'm now basing episode numbers off the sky-tv/Pivot-tv episode listing, and pb was nice enough to re-title everything on FanFare. However, the AV Club calls this one episode 5, so the whole thing is screwed up and confusing. Much like the show itself.
posted by jazon (7 comments total) 1 user marked this as a favorite
The episode thing is a little confusing on some websites, possibly as there's a gap of a few days between when an episode shows in some countries and when it shows in the USA.
posted by Wordshore at 1:25 PM on February 21, 2015

I just don't know what to think.

Now there's evidence that supports Frank's story?? When he took off the bloody sweater, he had scratches all over his neck. I would think that the police would've noted them. And we saw the boy open the window that night, he wasn't taken. He came back covered in blood and frostbite and EMT Frank thinks it was a hemorrhage? And he couldn't tell his wife because? Oh honey I was just sitting in the kitchen reading the newspaper and when I checked on him...

Ronnie on the glacier... so strange! What did Carrie hear? What did Ronnie see? What happened to his hand? Why did she leave the bunny on the boat? During the entire scene I expected something to come through the tent wall behind Carrie.

Also, I woke up this morning and decided the neighbor guy is Jack Sprat.
posted by jazon at 6:21 AM on February 22, 2015

What happened to his hand?

He touched the 'mammoth' that has something wrong with it (radioactive, hence the somewhat cliched radioactive sound? virus?), when he was sawing off the tusk. Probably also why the kid in the oxygen chamber thing is ill.

Must admit I am enjoying this more each episode, despite the variable opportunities to act. The bald-headed guy from London with the strange transatlantic accent is pretty damned good in this.
posted by Wordshore at 11:23 AM on February 22, 2015

What happened to his hand?

Yes, there's something going on with the defrosting woolly mammoth (the sound I hear is buzzing insects, very ominous) (and why didn't spoon-fed girl see it when she went into the shed?) but I think the cut hand was from the scene at the supermarket. Didn't the trussed-up guy say something about Ronnie grabbing a knife by the blade? So now he's infected with dormant woolly mammoth germs?

The blood outside the tent, Carrie (we) did not hear any noise. But the show is not showing us everything, ie we didn't see Frank cleaning up his son, but judging by the bloody pajamas (tossed behind the headboard??) that's what happened.

Another great episode. I still think too much is being left in the bag of secrets, to be pulled out as a "surprise" twist later on. But, DCI Morton makes it all worth it.
posted by rebent at 7:19 AM on February 23, 2015

Five episodes down (counting the opener as two episodes), seven to go.
posted by Wordshore at 1:46 PM on February 26, 2015 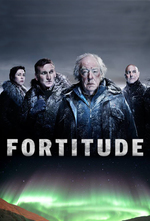