Lip is with Karen at the hospital, while the rest of the Gallagher siblings return home to see the kitchen spattered in blood from their mom’s suicide attempt. Fiona and Jimmy/Steve start making out and go to the bedroom, but they’re interrupted by a sad Debbie and Carl, who fall asleep in the bed. (This episode seems to be about interruption — see the title.) Sheila and Jody have brought home Karen’s baby. After Karen is released, she finds her baby and gives her mom an ultimatum: “Me or the baby.”


Sheila’s answer: “The baby.” Karen calls the police to report a kidnapping, but they won’t do anything since the baby is in the loving care of his grandmother. Lip tries to convince Karen to stay, but she points out that this has nothing to do with him because “it” isn’t even his baby. Karen walks out, and Lip follows her out of the house, saying: “You know you’re gonna regret this.” (More interruptions: Lip interrupts Karen while she’s interrupting her life.)

Frank is worried the hospital is going to take away everything that makes Monica Monica. Frank and Debbie break Monica out of the hospital at night. (When Frank is leaving the parking lot and is stopped by a guard, Frank poses as another guard, and the real guard admonishes him to keep his badge on at all times. Frank makes up an excuse that he needs to go to his car to get his inhaler for asthma and tuberculosis. But Frank’s cough suggests he actually has an undiagnosed illness.) Monica escapes but decides the kids would be better off without her. She rides away in her new girlfriend’s car while shouting her love to Debbie.

Jimmy is becoming part of the Gallagher household again. Ian: “Back to being a legal resident around here, Steve?” Fiona: “His name’s Jimmy now. ‘Steve’ was just an alias he used to lie to me about who he really was.” Ian: “Not cool, Jimmy/Steve!” Jimmy finally explains it: “I changed my name because I was stealing cars — didn’t want anybody to track me down if things went south. It didn’t have anything to do with her.” Ian seems unconvinced, sarcastically responding, “yup,” while Jimmy looks down.

Fiona and some of her siblings meet Jimmy’s family. Jimmy’s father (Lloyd) and Ian realize they’ve already met when they hooked up last episode. Ian confronts Lloyd in the men's room: “Do they know you’re gay?” “I’m not gay! … Anything that walks, that’s me.”

More interruptions: Right after Jimmy tells Fiona he loves her, Estefania shows up at the Gallaghers’ house, fleeing Marco, who beat her. When Frank starts to attack Ian over beer, Estefania knocks Frank out with a wok. The family sets him out in the snow.

Fiona passes the GED. Lip goes back to high school, and comes home.
posted by John Cohen (7 comments total)
Loved the final shots of the snow and with Frank emerging from under it. This was a season that began with scenes of summer, and we progressed through fall. A season of seasons, nicely threaded through. There were 3 seasons — summer, fall, winter —  3 trimesters, like a pregnancy.
posted by Alizaria at 5:27 AM on February 26, 2015 [1 favorite]

Question: How is Lip allowed to take the test in the same class where he told the teacher “fuck you” and threw a chair through the window, if that got him expelled? I thought he was offered admission to a different school — that wouldn’t explain how he was able to go back to the same classroom.
posted by John Cohen at 8:48 PM on February 26, 2015

John, I'm not sure that it's explicitly stated that they let him back in, but there's an occurrence (like not writing him up for smoking in the bathroom) where the school faculty (his councilor) is willing to bend the rules or give him leeway because they recognize Lip's extraordinary potential and how relatively close he is (in that he only has 1-2 more years before college) to success that is so elusive for most of their students.

Nonetheless, bending the rules so much (to allow him back in) is still a bit of a stretch of belief for the audience given that chair situation.
posted by fizzix at 6:35 AM on February 27, 2015

There was a point in this episode where I was saying out loud "I really don't care if Fiona has sex or not." Go ahead and interrupt her all you want. This is the central hole in the series for me: I do not care if Fiona finds happiness. I feel like they made her love life central so some idea of a normal person would stick with the show, despite all the weird people. I much prefer Karen, whose intense selfishness makes her a nice break from Fiona, who's always getting back to worrying about her family and being the mother they missed out on.

It was amusing and sad to see the effort at grabbing Monica back into the family, when she needed her hospital treatment. They got her out, but she zoomed away in the car with Jenna Elfman. I guess she needs a mother. Nice contrast to the ending of the previous episode where Sheila was zooming away from a hospital with a baby. She needs to be a mother.

Loved the scene with Sheila choosing the baby over Karen and Karen (the real mother) refusing even to acknowledge that "it" is a human being.

This episode, thematically, was about what it means to be a mother and to have a mother. So why call it "Fiona Interrupted" as if what it's really about is whether Fiona at long last gets to have sex with Steve? As noted above, I can't bring myself to care. I wonder if the writers care. Sometimes when I'm watching this show, I think the writers are just creating a lot of characters and then just making things happen to them, putting them in different rooms together and making up trouble. Reminds me of how my sister and I used to play with our little dolls when we were kids.
posted by Alizaria at 12:55 PM on February 27, 2015 [1 favorite]

there's an occurrence (like not writing him up for smoking in the bathroom) where the school faculty (his councilor) is willing to bend the rules or give him leeway because they recognize Lip's extraordinary potential and how relatively close he is (in that he only has 1-2 more years before college) to success that is so elusive for most of their students.

Not reporting him for a violation is different — that just means there isn't 100% enforcement. That doesn't explain how an expulsion could be rescinded.
posted by John Cohen at 8:49 PM on February 27, 2015

This episode, thematically, was about what it means to be a mother and to have a mother. So why call it "Fiona Interrupted" as if what it's really about is whether Fiona at long last gets to have sex with Steve?

I agree, the title is puzzling. It's a play on Girl, Interrupted. And as I said in the post, there are a lot of interruptions in this episode. But why put the focus on Fiona? This is the only episode title with her name in it (at least in the first 4 season), but there are many episodes with more dramatic stuff happening to Fiona.
posted by John Cohen at 8:54 PM on February 27, 2015

I, too, thought the title alluded to "Girl, Interrupted," even though the omission of the comma seemed to disown the allusion. "G,I" is about life in a mental institution, so the reference should have more to do with Monica.

It's interesting that Fiona's name hasn't been in a title before, and that made me think of the way Frank's name was in the title for the final episode of Season 1.

Looking up episode titles, I started noticing who wrote which episodes, and now I realize how careless I've been in my references to "the writers." I see that John Wells wrote the first and last episodes of Seasons 1 and 2, and also that the material I've (by far) liked is by Nancy M. Pimental. Who is this person, Nancy Pimental? "From 1998 to 2001, Pimental was one of the writers of South Park, and in 2002, she wrote the script for the film The Sweetest Thing. She also replaced Jimmy Kimmel as co-host of the Comedy Central game show Win Ben Stein's Money, a job she held from 2000 through 2002." All right, then. Nancy Pimental. Nice work.
posted by Alizaria at 9:05 AM on February 28, 2015 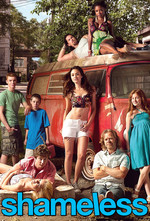