Jane struggles to embrace acceptance of her break-up with Rafael by focusing on co-parenting with him and flipping her breeched baby. Alba does not want to pursue criminal charges against Magda because of her illegal immigrant status, so Michael and Jane work the investigation on Alba's behalf, while Alba struggles with her feelings for Father Edward. Xiomara is also struggling with the end of a relationship this week, and she finally gets a chance to speak with Rogelio about her mistake. Luisa returns and pushes for the Marbella to host a wrestling match.


Jane is grappling not just with the end of her relationship with Rafael, but also with the idea that she is now a single parent. She and Xiomara talk about how to work through their respective break-ups, and Jane tells her mother that once Rafael said he didn't love her, she forced herself to move on. Xiomara says she needs closure like that, and begs Jane to convince Rogelio to let Xiomara explain herself. But Jane has even more on her mind with the revelation that Magda pushed Alba down the stairs, but doesn't want to talk to the police out of fear of deportation. Xiomara finds out and demands action, and she suggests recruiting Michael. Jane wonders why Michael would help, and Xiomara tells Jane that Michael made some past immigration problems go away (when Alba was in the hospital in Chapter Ten), but that Michael didn't want Jane to know because he didn't want Jane to think he did it to win her back. Jane is overwhelmed with delayed gratitude for Michael, and she finds him to thank him, hug him, and enlist his help in taking Magda down for the attempted murder of her grandmother.

Meanwhile, Luisa is back, fresh from another visit to Peru, and no, she has not been in contact with her ex-lover/ex-step-mother Rose/Sin Rostro ("She's a murderer who killed our father!"). But she is dating a hot female wrestler named Juicy Jordan, and, as 1/3 partner, wants to promote her with a wrestling match at the Marbella while Rafael and Petra play a game of placation chicken. Rafael argues with Petra, trying to maintain the business plan he had in place with his father for the Marbella. He attends some doctor's appointments with Jane, but after educating himself on breech birth (which pleases Jane), he is dismayed when the baby flipped overnight and he only learns about this the day after. Rafael finally sits down with Luisa to explain why he wants her on his side with regard to the hotel, and he opens up about seeing his mother again and his break-up with Jane, which is why he needs the hotel to succeed. Luisa wisely tells him that when he gave up on Jane in favor of building a legacy for his child with the hotel, he gave up on the wrong thing.

The in-the-lobby(?) wrestling match does seem to bring a lot of guests to the Marbella, and it is there that Jane brings Xiomara and Rogelio together to tell them to discuss their issues and leave her out of it. Xo apologizes and tells Ro that she made a huge mistake, but Rogelio cannot forgive her because he has been publicly humiliated by his ex-wife's infidelity. Later, backstage back at The Passions of Santos, where Rogelio has been re-hired to combat plummeting ratings, Xiomara tells him that she accepts that their relationship is over, and that she wants him to continue having a relationship with Jane, even if that means she is uncomfortable.

Jane has an epiphany at the match, and throws herself into research-mode, looking online for photos of Petra at the party the night her grandmother was pushed down the stairs to prove Petra is lying about being in her apartment. Instead, she finds a photo showing Ivan in Petra's window. Petra, who previously knew nothing of Magda being able to walk, let alone push someone down the stairs, is lying to protect her mother, because her mother pushed Alba for seeing the kidnapped Ivan in their room. Petra uses Milos to threaten Ivan into lying about being in the apartment as a plumber and not as a hostage. Magda, who is now working at the Marbella as well as living there, works on getting Jane to stop pushing the investigation by threatening to deport her grandmother.

Jane is exhausted and stressed, and falls asleep burning moxa (the narrator told you to Google it) in an attempt to flip her unborn baby. When Alba chastises her for her negligence, asking why she didn't simply ask for help if she needed help, Jane tearfully breaks down, wanting desperately to prove to herself that she can do everything on her own as a parent, because she has to, and she didn't want to, and she didn't plan to be.

So when Jane initially talks to Rafael and asks for his help distancing herself from Magda, she is pleased that he has gotten Petra to fire her from working at the Marbella. But that isn't enough for Jane, who wants Petra out as well. After all, both Magda and Petra are lying to police, and Jane knows it. When Rafael refuses (Petra is acting as part-owner of the Marbella on Milos's behalf), Jane breaks. She cannot co-parent with Rafael if he brings the baby around Petra, who is conspiring to cover-up the attempted murder of her grandmother (and, incidentally, also secretly still in love with Rafael). So Jane decides to go for full custody of her baby.

Also featured - fantasy wrestling match-ups for the major conflicts of the episode:

Detective Danger vs. The Hot-elier (Michael and Rafael cross paths both because of Magda and because of Jane)
Mommy Long Legs vs. De La Vengeance (Xiomara wants Rogelio back, but he won't forgive her)
The Cold Warrior vs. The Pregnant Punisher (Petra wants to protect her mother, Jane wants to protect her grandmother)
posted by joan cusack the second (1 comment total) 3 users marked this as a favorite
The fantasy wrestling title cards were so delightful. Those and the cupcakes with Rogelio's face were too much, in the best of ways.
posted by mixedmetaphors at 6:25 PM on April 30, 2015 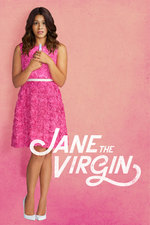