Brian O'Conner and childhood friend Roman Pearce are re-united by the FBI to bring down a Miami drug exporter in exchange for clear records.


Rated 3 stars by Roger Ebert - ""2 Fast 2 Furious" is a video game crossed with a buddy movie, a bad cop-good cop movie, a Miami druglord movie, a chase movie and a comedy. It doesn't have a brain in its head, but it's made with skill and style and, boy, is it fast and furious." and 36% on Rotten Tomatoes, and age 14/1 star by Common Sense Media.

Without Diesel power, 2 Fast 2 Furious gets stuck in the Miami sand

In other words, the idea of family is alive and well in 2 Fast 2 Furious, even if Dom Toretto is not. He’s not dead, mind you, but he’s not here, and who the heck knows how well he’s doing. Wherever he is, I miss him.

We even lost Ja Rule!
posted by the man of twists and turns (12 comments total) 1 user marked this as a favorite
The only TFAF joint I didn't see in the theatres. Will re-watch tonight - I can't remember enough about it (except for thinking that Eva Mendes was a star - still hoping she returns to the family).
posted by Gin and Broadband at 1:22 AM on May 25, 2015

It is pretty bad, to be honest. No Vinnie D and consequently an immense lack of charm, which makes the nonsense harder to pull of in a pleasing way.

It does have car-tasers though.

And I guess we have to get it to get to the good stuff, probably, I guess... Not sure how much of any of this we will be revisiting.

I thought this was better than Tokyo Drift, if only because of Roman. Tyrese Gibson is a gifted comic actor, and for me he really carries the movie.
posted by KathrynT at 9:25 PM on May 25, 2015 [1 favorite]

I'm also in the "Better than Tokyo Drift because of Tyrese" camp. He's hilarious and I appreciate that John Singleton gives us an opportunity to stare at his abs.

I like how ridiculous this movie is. It knows it's barely a true sequel so it just does its own thing. Why not throw a Dukes of Hazzard car jump in there? Why not ripoff the Three Amigos "Amigos Amigos Amigos"? Why not show how evil the bad guy by a fairly inventive torture scene? I don't think 2 Fast is as successful as Fast Five in smushing up/ripping off movie genres but it's pretty entertaining.

Eva Mendes is sadly wasted in this movie and I wish they hadn't tried the love interest route with her. She's more interesting as an ambiguous potentially double agent where she and Brian can bond over the difficulties of being in deep cover.
posted by zix at 10:30 AM on May 26, 2015 [2 favorites]

Nah, this isn't that good a movie, but I like it a little bit just because of the ridiculous fight scene between Paul Walker and Tyrese Gibson. It looks like amateur fighting, not action movie fighting, and the fact that Walker keeps repeating, "You STILL fight like SHIT! You STILL fight LIKE SHIT!" kills me every time.

People make the crack all the time about the F&F movies basically appealing to everyone's inner 12 year old, but that's one of the few moments I can remember in the series where the actors start straight-up PLAYING 12 year olds.
posted by Ipsifendus at 5:12 AM on May 28, 2015 [3 favorites]

"Guns, murderers, and crooked cops!" This had its good moments and I agree that Tyrese was a great addition. His character could certainly have been given more substance, though.
posted by Ik ben afgesneden at 2:53 PM on May 30, 2015

The Gallo's pizza guy/cop was completely unnecessary and boring. I kept wondering "why are you here?" every time he appeared.
posted by Ik ben afgesneden at 2:59 PM on May 30, 2015

I'd forgotten about the orange-themed nightclub, with it's decor so surreal and fugly it's like something Tim Burton would've come up, had he ever directed a Fast and Furious movie.
posted by Gin and Broadband at 2:37 PM on May 31, 2015

Visionary director fun fact: This is from John Songleton, previously known for Boyz n the Hood.
posted by Artw at 2:44 PM on May 31, 2015

I've missed this thread! I am aghast, because I will not lie, this is my favourite of the first 3. The plot is objectively dumb, but my god, you cannot fake that bro chemistry between Paul Walker and Tyrese Gibson. And that stupid playground fight after the derby still kills me.

And I remembered being very impressed with Singleton's direction, not knowing anything of his work prior to that.

I've been so glad Rome's returned into the franchise, but I've always been bummed that his relationship with Brian gets sidelined for the grand Brian/Dom (b)romance, because these two chuckleheads are fun.
posted by cendawanita at 9:21 AM on June 10, 2015 [2 favorites]

Also, I do not know what it is about Tyrese that always ALWAYS makes Paul Walker on the verge of just straight up laughing and breaking character (he got better about keeping a lid on it over the years, but he did admit this is just a thing he can't help with this guy), but rewatching this movie with this observation in mind always keeps me this close to laughing myself, because this production is such a shambles in this particular aspect. At least half the problem of the unconscious mind parsing PW's character work as being all over the place, to my mind, is because of this.
posted by cendawanita at 9:25 AM on June 10, 2015 [1 favorite]

And I'm pretty sure it has the best blooper reel of the franchise. (You can actually hear Singleton going 'you're a goddamned fool' off-camera at Tyrese)
posted by cendawanita at 9:41 AM on June 10, 2015 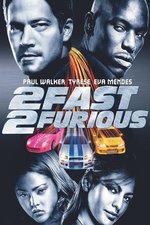