Author P.L. Travers reflects on her childhood after reluctantly meeting with Walt Disney, who seeks to adapt her Mary Poppins books for the big screen.


From the review by Susan Wloszczyna at Ebert.com:

"Mrs. Travers," as she preferred to be called, is in a tizzy of disdain from the moment the L.A. sunshine hits her perpetually frowning face. Taking in the California air, she tells her chauffeur (Paul Giamatti in non-sadsack mode for once), "It smells like…" He smilingly suggests, "Jasmine?" "No," she continues. "Chlorine. And sweat." Her mood only grows more despondent when she enters her posh suite at the Beverly Hills Hotel and discovers that it has been festooned in the manner of a child's birthday party, complete with cakes and candy, balloons, fruit baskets and countless stuffed animals based on Disney characters. Travers forlornly glances at a cuddly Winnie the Pooh and exclaims, "Poor A.A. Milne." The giant Mickey Mouse that graces her bed is dispatched to a corner with a warning: "Stay there until you learn the art of subtlety."

The plush critters get off easy compared to how Travers treats the talent in charge of translating her beloved authority figure into an adored movie character. Imagine Maggie Smith's imperious Dowager Countess on "Downton Abbey" crossed with Godzilla. Stomping onto the studio lot, Travers insists on changes that range from innocuous (switching the name of the mother of Mary Poppins' wee charges from Cynthia to Winifred) to insulting (she rails against the use of any "silly cartoons," a phrase that visibly pains Disney) to the impossibly outlandish ("No color red in the film—at all!").

Yes, Thompson gets most of the best lines, and rightly so. But "Saving Mr. Banks" has greater ambitions than simply providing a backstage peek at how such catchy songs as "Let's Go Fly a Kite" and "A Spoonful of Sugar" came to be (Jason Schwartzman and B.J. Novak are superb as in-house sibling tunesmiths Richard and Robert Sherman as they endure verbal slings and arrows).

The A.V. Club was less forgiving in its review, "Disney celebrates selling out - and its own victories - with Saving Mr. Banks":

Why was Travers so adamant, so stubbornly uncompromising, about the adaptation of her work? To hear Saving Mr. Banks tell it, there was a simple psychological rationale for her reluctance. (Short answer: She had daddy issues.) That angle feels not just overly simplistic, but also convenient: Were the film to merely accept Travers’ distrust of Disney at face value, it might risk suggesting she was right to worry about what this corporate giant would do with her beloved characters. So, no, she’s just got a problem, and it’s nothing that can’t be fixed by a guided tour of Disneyland, regular chats with a kindly chauffeur (Paul Giamatti, rarely this upbeat), and a climactic Tom Hanks monologue that’s about 25 percent honest emotion, 75 percent emotional manipulation. Depicting its hesitant heroine as a kind of Scrooge figure, whose cranky, principled stance can only be conquered by the magic of Disney, Saving Mr. Banks plays like a celebration of selling out. Naturally, the film neglects to note how much Travers actually hated the finished Mary Poppins movie. She’d probably have hated this one, too.

I love Disney, but I've avoided this movie because it so reeks of history being written by the victors.

"A celebration of selling out," indeed.

But now I kinda want to see Bradley Whitford, B.J. Novak, and Jason Schwartzman bounce off each other for a while.
posted by He Is Only The Imposter at 7:26 AM on June 4, 2015

I did not like this movie. You're right to avoid it, He Is Only The Imposter. You are totally spot on that it basically celebrates steamrolling a woman down on her luck into signing away her rights and laughs away her concerns as if they were anything other than totally correct. The "daddy issues" backstory felt tacked-on and unnecessary. I love all things Disney and thought I'd surely find something to like about this movie, but it really bothered me. It didn't help that Tom Hanks played himself with a bogus midwestern accent. If you like Tom Hanks that's great but if you were hoping someone would show up and act for however long the movie was, tough luck for you.

I was at least hoping I'd enjoy the scenes shot at Disneyland, but for anyone who's ever actually looked at old footage of Disneyland, they didn't even make an attempt to get period details right.
posted by town of cats at 7:55 PM on June 6, 2015 [1 favorite]

The best part is the actual audio tapes played over the credits.
posted by Ideefixe at 4:21 PM on June 7, 2015 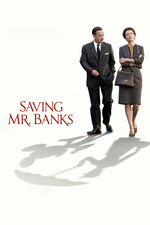