When Shaun decides to take the day off and have some fun, he gets a little more action than he bargained for. A mix up with the Farmer, a caravan and a very steep hill lead them all to the Big City and it's up to Shaun and the flock to return everyone safely to the green grass of home.

"Aardman - and its joint writer-directors Richard Starzak (aka Goleszowski) and Mark Burton – have played it pretty straight with Shaun the Sheep the Movie: it’s pretty much exactly what you would imagine an 85-minute version of the TV show would look like. Benign, animal-based hi-jinks, frantic chases along country lanes, a constant soundtrack of squeaks, grunts and snorts, beautifully rendered stop-motion, all drenched in a haze of geniality and glee.

In a wider sense – as well as the more specific one of Shaun originating as a Wrong Trousers spin-off – this film represents Aardman’s return to Wallace-and-Gromitville, a consolidation of the seemingly homespun wistfulness that the company clearly does so well. This is not to knock Aardman’s last two features, The Pirates and Arthur Christmas, in any way.

It’s just that when we settle down with some claymation animal human shenanigans, find ourselves marvelling at some intricately constructed contraption, or are momentarily diverted by a snicker-worthy shop sign, it’s the cinematic equivalent of the perfect cup of tea. But the amber glow of nostalgia doesn’t induce backward-looking sentiment of the Ukip variety: the Aardman vision of contemporary England is generous, inclusive and - if a fast-moving film about a smart-alec sheep can allow itself such grandiose ambitions – genuinely inspiring."

posted by joseph conrad is fully awesome (6 comments total) 3 users marked this as a favorite
Also the first animated movie release in whoknowshowlong with no Celebrity Character Voices... or apparently any voices at all except for a few well-placed baahs, barks, and arghs. The 'keep it in Silent Movie mode' constraint will be so refreshing to take in (yeah, I haven't seen it yet).
posted by oneswellfoop at 4:57 PM on August 6, 2015

Saw it with a 3 year old. He laughed. I laughed. It has some top-quality slapstick.
posted by EndsOfInvention at 1:12 AM on August 8, 2015

I loved it. The dog with the angry stare at the shelter might be one of the most consistently hilarious and satisfying recurring jokes I have ever seen in a film.
posted by maxsparber at 9:28 AM on August 11, 2015 [4 favorites]

I thought the movie was great. Unfortunately however, we chose this as the first movie theater experience for my 4-year-old daughter. The Shaun the Sheep TV series has always been a favorite of hers. She tended to be scared of the huge bull in the TV show, but the bull scenes were always pretty short. This movie, on the other hand, featured an extended horror-movie homage near the end that was over-the-top terrifying for her. The middle part of the story where the sheep are lost in the city was also very anxiety-inducing. I think most kids could handle it, but if yours are already at all scared by the TV show, then definitely stay away from the movie.
posted by polecat at 1:38 PM on August 23, 2016 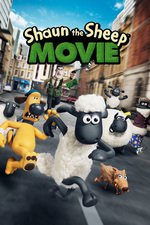