A British newscaster moves to Los Angeles with his alcoholic manservant and the baggage of several failed marriages to host a sanctimonious talk show.

Entertainment Weekly (Jeff Jensen) gives the first episode a "B" and comments:

"Created by Jonathan Ames (Bored to Death), Blunt Talk’s media satire is by turns sly and stale. Blunt isn’t a convincing anchorman avatar, though he works as a metaphor for pampered celebrity. The show begins to find itself as an inspired comedy about redemption in a post-self-help, post-hot-mess culture in the third episode, which digs deeper into its supporting characters. Stewart is always a total pleasure: The fun he’s having playing a character that allows him to do more than boss around mutants and spacemen is infectious. He carries Blunt Talk with his X-traordinary talent as the show searches for a bold vision worthy of him."

posted by joseph conrad is fully awesome (11 comments total) 1 user marked this as a favorite
If Patrick Stewart is going to do a comedy, that is exactly the kind of role he should be playing. Going down the IMDB cast list, casting Richard Lewis as his analyst/therapist (analrapist, Dr. Funke?) is also inspired and Brent Spiner shows up in Episode 2, hopefully channeling his Lore side more than his Data side. Stewart's real life son Daniel as Blunt's son is also promising casting, but he's only on for Episode 1.

I worry about anything labeled "from Executive Producer Seth MacFarlane", for obvious reasons, but I remain hopeful, as I am about the upcoming animated "Bordertown", if only for the involvement of cartoonist Lalo Alcaraz as a writer/'consulting producer' (but they needed to have him more involved with the character design, seriously).
posted by oneswellfoop at 4:50 PM on August 15, 2015 [2 favorites]

I adore Patrick Stewart so I'm crossing my fingers and hoping this'll be good, it may take a few episodes for it to find it's feet. The "caught with a prostitute" thing is heavily reminiscent of the Hugh Grant scandal and I assume we kind of all know that - is this obvious to others?

There are also obvious parallels with Dudley Moore in "Arthur" (what with the wild-playboy-and-manservant-sidekick routine) and I'm wondering it that's also something the writers will use in skewing our expectations and then deliberately pulling the rug out from under them. Or something.

Anyone who follows Stewart's Twitter account - @SirPatStew - knows his timeline is pretty good. (He just tweeted about standing in line for tacos and pokes fun at his celebrity status at the same time.)
posted by joseph conrad is fully awesome at 7:25 PM on August 15, 2015 [1 favorite]

Also, the first two episodes are currently up on Starz for free, just confirm you're old enough. The best part of that age verification? Instead of defaulting to today's date, they start at January 1, 1950, so all you have to do is press "verify" and start watching.
posted by filthy light thief at 8:53 PM on August 15, 2015 [1 favorite]

Is that free episodes link working for anyone in Canada? After I verify my age, I get some fuzzy animation and that's about it -- no video.
posted by maudlin at 4:23 PM on August 16, 2015

Liked this first one well enough, and I hope it takes off, but time will tell. In spite of (or maybe because of) Stewart's own undoubted talents, I think this will stand or fall based on good ensemble acting, and there's definitely potential there.

I counter your Hugh Grant suppositions with the seminal Eddie Murphy just giving transsexual youths a ride home.
posted by provoliminal at 4:45 AM on August 23, 2015

I can't put my finger on it but something about the transexual hooker thing bothered me.
posted by miss-lapin at 10:03 AM on August 25, 2015

I just heard about this tonight from listening to Richard Lewis on a WTF podcast. Dialed it up on the pirate teevees. Glad I tuned it in. I am getting a vibe like a comedically absurd "Fear and Loathing in Las Vegas" meets "Network News". And just as Johnny Depp and Peter Finch owned their respective roles, I'm really digging Patrick Stewart's take on a transplanted-Brit, drug-addled, narcissist, sensationalist cable news anchor -- as well as the ensemble cast as his production crew of enablers.

...aaaaand I quit halfway through episode 4. I liked most of the characters, but ultimately there were no compelling storylines to carry me through. They could have driven this show into some really interesting areas. I was really hopeful. Oh well!
posted by not_on_display at 12:35 AM on December 30, 2015

I love this show for its characters, and just the overall loving attitude they have for each other.
posted by sixpack at 8:55 AM on January 6, 2017 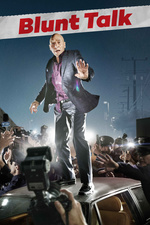