Just released from prison, Max Washington must decide which of his previous professions to return to burglar or tap dancer.


GodDAMN, what an amazing little slice of history. It's being made right before our eyes. The old dancers, especially during the challenge? WOW. Truly amazing, watching Sammy Davis Jr. (whose lines gave me chills, as he passed away shortly after the film was made) pass the baton to Gregory Hines, who then passes it to a young Savion Glover (he is generally credited with "single-handedly" reviving the tap genre in America). Love this movie.
posted by Melismata (3 comments total)
I dropped into the middle the other day at the audition scene and it just made me angry and annoyed at that kind of a plot device. The street dancer being better than any pro and the absurdly arrogant director just did not ring right for me. Perhaps it worked in context.
posted by sammyo at 4:46 AM on August 20, 2015

I agree--the weakest part of the movie, of course, was the plot. Tons of clichéd scenes ... the back-and-forth romance, the shallow director, the putting back the jewelry--I think that's what made the movie get only mediocre reviews when it came out. Watch the dancing, people!!
posted by Melismata at 7:26 AM on August 20, 2015

Oh yeah, the plot(s) are of no consequence, just ignore them. I did like the jiving gangster who thought Max was a total loser and couldn't keep his fingers still and bopped along as a nervous device (Joe Morton). I finally tracked down a dvd of Tap and now can watch it anytime I want to, instead of watching a crappy saved-from-tv vhs.
posted by MovableBookLady at 12:30 PM on August 28, 2017 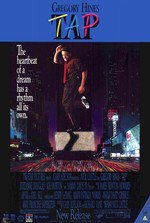