When a group of Peacekeepers from a damaged Marauder board Moya, the crew pretend to be a Peacekeeper prison vessel. The Peacekeepers' secret cargo presents a serious threat when Rygel and Chiana open the container. [via]
posted by along came the crocodile (13 comments total) 2 users marked this as a favorite
I said this last time, but it's another one of those episodes that win me over by its conclusion.

First, thank goodness the appearances of the marauders has been updated to remove the Glam Rock face paint. Major improvement.

Second, it seemed as if Bowder was struggling to keep a straight face for half of the lines he delivered with his fake PK (British) accent .

Third, it's the Aeryn and Jon conclusion that makes it work.

The episode as a combination of literal bug hunt and paranoid infiltration. I think the pairing up of prisoners with PKs could have been done a bit more interestingly, playing a little bit more off the clash of personalities. For what amounts to the third time, Rygel is frozen or placed in stasis. Way to go, Sparky!

Biggest development (outside of Aeryn and Jon): A base in the uncharted territories...
posted by Atreides at 8:58 AM on September 2, 2015 [2 favorites]

Another tense one, and the appearance of the PK uniforms! This is one of those 'really bad plan' episodes. Actually, if Chiana and Rygel hadn't opened the box it might have gone better. Possibly. Nah, probably not, this is Farscape. Whereas other heroes are stoic, steady, in control, John Crichton is an amateur desperately paddling to keep his head above water. And not always succeeding. Which is one of the reasons I like the show so much. Crichton's accent is probably about right for a IASA scientist who's basing it off 7-8 months of living with a PK, and the rest is sheer front.

As for the slo-mo, I truly believe that Farscape has a mission to make its viewers experience as much disorientation and trauma as its characters in real time. It's weirdly psychological. BB has a degree in psychology, and CB has apparently spent a lot of time researching the effects of trauma and stress on the body. This might explain some things.

Who came up with the scenario of the neural tech controlling Leviathans? Pilot or Aeryn? I reckon Aeryn would have got it from Velorek if it was her. And why do Zhaan's sheets have litmus fibres in them? I liked Chi's reaction though.

I thought it was interesting to contrast Aeryn's attittude to duty and loyalty with that of Larraq. She comes across as quite a traditional soldier sometimes, but I wonder if it's a trait aggravated by her trying to cling on to her sense of identity now that it's been stripped away. Larraq offers her everything she can't have, including a relationship and that has to hurt. Also, you can tell she absolutely loves being a pilot.

Rygel and Chiana are trouble squared. It was uncomfortable to see Chiana being threatened sexually by Thonn (even if it was the virus transmitting itself), but the character walks that edge a lot. It will come up again.

I felt for D'Argo being forced to revisit his painful experiences at the hands of the PKs. D'Argo's one of the most emotional characters, and yes, I agree about AS's eyes. His understandable reluctance and anger remind you of the risks Team Moya are facing.

Crichton's way ends up in him being involved in the deaths of two people. When he's sitting at the end cradling the pipe that was used to kill Hassan... did he remember or did he put two and two together? It's a bitter sweet scene wth Aeryn. And then there's the Gammak Base...
posted by along came the crocodile at 1:03 PM on September 2, 2015 [1 favorite]

In which John Crichton puts on his first pair of leather pants, and everything goes to hell.

This episode and "A Human Reaction" are setting up some soul searching for Aeryn. The the moment John and Aeryn shared in "A Human Reaction" where he apologizes for her exile from the peacekeepers is interesting because her flat "I have alot to blame you for" in the safe house had no real emotion behind it. This episode we have Larraq's offer, that has to be a painful "what if" for Aeryn. From what we see of him he's humane, reasonable, and intelligent. He's making basically the same statement John made. "You could be more". She could have realized her potential within the Peackeepers. Then there's the fact that she was very nearly killed. in this episode. I said in PK Tech Girl that Aeryn was still very much a Peacekeeper. It's not clear that that's true now.

Minor thoughts: Is this the first time Crichton has straight up killed someone? I think so but could have forgotten something. Granted, he wanted to kill Crais in "That Old Black Magic", tried to kill Namtar, and probably didn't care too much if that bomb killed Durkha. At the same time this felt far colder and far more calculated. "Boom"

Between Rygels bomb throwing shenanigans and Chiana being basically responsible for letting the virus loose in the first place, they're really skating the line where you'd expect them to get tossed off the ship. Maybe at a habitable planet in a transport pod. Maybe not.
posted by Grimgrin at 5:19 PM on September 2, 2015

I wonder how many herbs and spices were there?
posted by the man of twists and turns at 11:23 PM on September 2, 2015

Man, those Peacekeepers have the worst team-building activities. And is everyone who gets between John and Aeryn fated to die??
posted by thetortoise at 2:37 AM on September 3, 2015

That accent is so dodgy it takes me out of the episode, even though a lot of people think it's an intentional part of the Crichton character. I'm not so sure.
posted by Ray Walston, Luck Dragon at 4:27 AM on September 3, 2015

I kind of enjoy the accent but I just don't understand why it's there. Surely the Peacekeepers can tell he's not speaking their language? And maybe, since Peacekeepers come from many different Sebacean planets, they are all speaking different languages anyway. IDK.
posted by chaiminda at 5:46 AM on September 3, 2015

Minor thoughts: Is this the first time Crichton has straight up killed someone? I think so but could have forgotten something. Granted, he wanted to kill Crais in "That Old Black Magic", tried to kill Namtar, and probably didn't care too much if that bomb killed Durkha. At the same time this felt far colder and far more calculated. "Boom"

I think it is the first time, and I also think it really illustrates how much Aeryn matters to him. He doesn't know if Aeryn will live or die from her wounds, so his mind is in a place of, "I will hurt the person who hurt the person who matters most to me..." At the least, I saw it as a calculated retaliatory strike for what he(it?) did to Aeryn.
posted by Atreides at 7:55 AM on September 3, 2015

Hmm. BB trained to act in London and his wife is the English actress Francesca Buller (her first FS appearance is coming up in a few eps) so if anyone had on the spot accent coaching I guess it would be him? It's not the worst one I've heard. But who knows. I still think the translator microbes mess with your mind. They try and interpret as best they can what you're saying and how you say it, and alter perception to match. (Are they even reliable narrators?) Now I have this image of Crichton enthusiastically trying his Sebacean accent out on Aeryn for hours until she finally crumbles and lets him wear the captain's uniform just to shut him up.
posted by along came the crocodile at 11:21 AM on September 3, 2015

thetortoise: And is everyone who gets between John and Aeryn fated to die??

This could be just a by-product of the fact that from here on out, the survival rate of the Farscape guest cast starts dropping precipitously. I think at it's lowest ebb they manage to get some people killed who were actually already dead at the start of the episode.
posted by Grimgrin at 4:04 PM on September 3, 2015

Regarding the accent: I read that BB was going for the accent that John Crichton would affect, which of course is not at all accurate. I'm pretty sure BB's actual English accent is much better! It's like the mind-cleansing episode (A Clockwork Nebari) where John decides that a stoned surfer dude accent is the best choice to convey his fake mind cleanse. It's pretty bad.

Yes, I think this is the first episode where John kills. The first one is done by the virus (using John's body) and the second time is John killing the virus so that it doesn't infect millions of people. Larraq just happens to be the virus' host at that point.
posted by cshenk at 9:02 PM on September 3, 2015 [2 favorites]

More on the accent! I was watching "The Hunt for Red October" last night and the Soviet officers are speaking Russian, but the filmmakers knew that the audience doesn't want to spend the entire movie reading subtitles half the time. So, there's a scene where one of the officers is reading from the Bible (in Russian), the camera pans in, and now we hear him speaking English as the camera pans back out. How does this relate to Farscape? My hypothesis is that we, the audience, hear what John hears (English). What if John is actually speaking Sabacean and his accent is terrible? To the Peacekeepers, he is speaking Sabacean, so no weird words and lips mismatch, but we of course hear English, but with a bad Australian accent. Too meta?
posted by cshenk at 8:37 AM on September 19, 2015

Hmm. Well, to the Sebaceans he would be speaking Sebacean because the translator microbes work by word for word equivalency, don't they? So they hear what he says - including the English expressions - but don't get the context. Like when he told Crais he couldn't have 'the keys to the Porsche' - Crais hears that in Sebacean but has no idea what it means or what a Porsche is. I have no idea how accents actually work with the microbes. Considering Sebacean is basically backwards English, I don't even know how you get a British accent out of that or how pretending to have one then translates into sounding more Sebacean! :D

(In my dream season 5/6 I would have John learning to speak Sebacean to help him understand Aeryn better just as she learned English to be closer to him.)
posted by along came the crocodile at 12:41 PM on September 26, 2015 [1 favorite] 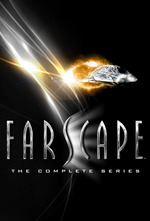