Also known as A Flame At the Pier, Takashi Fujiki stars as a rebel in this drama about life on the Yokohama waterfront by New Wave director Masahiro Shinoda. The rebel works as an errand boy for a shipping company and vents his frustrations by plucking on the guitar. His interpretations of popular trends in music are sometimes right-on, and sometimes not exactly. Bereft of his guitar, the rebel's modes of expression are not as effective in generating interest as the Yokohama docks themselves, a fascinating world in their own right. [via] (Available to stream commercial-free to Hulu subscribers here.)


Part of the Criterion on Hulu film club. If you're not a Hulu subscriber, we discuss a second film each week that's free to non-subscribers. More info here.
posted by ob1quixote (1 comment total) 1 user marked this as a favorite
Well I screwed up the rotation by posting this one, but at least it's a Labor Day movie, kind of. Apologies.

I've seen a complaint that the movie drags. I think more accurate is that it starts with such a bang that, after the credits, the slow build-up to the climax makes it seem that way. The stakes get raised again and again during the course of events, but slowly. Like sitting on the beach as the tide is coming in. What starts as gentle laps against your feet becomes waves crashing against you, but only an inch or two at a time. For me, by the time Sabu turned up at the wake, I was sitting on the edge of my seat.

There are some great looking shots in this movie. The scene near the end where Kitani confronts Sabu is especially well done. I also really liked the music.

It's interesting from a story standpoint too. In 1961 Japan's economy grew by 12.04%, but the men who enabled that export boom by physically loading the cargo onto ships at great physical cost weren't sharing in the fruits of their labor. This was partly because they were getting chiseled by management, and partly because management were tied in with gangsters who relieved the men of part of their earnings every payday. Labor relations in Japan in 1962 were tense at best. Kubo Kiyoshi was murdered by gangland strike-breakers during the Miike Mine Strike in 1960, which puts this picture in a different light.

In the end, I think Shinoda's blending of the left-labor sensibilities of Kinoshita with the hard-boiled youth of the Sun Tribe works really well. I enjoyed this one.


P.S. It's a shame that there's not more critique and analysis of this picture in English. Not that I found a hell of a lot searching in Japanese either.

I at least was able to get a title for the featured song, "私を捨ててしまってくれ" ("Watashi o sutete shimatte kure"). Unfortunately, I can only understand about 10% of that, and the Google translation, "Let me've abandoned me," proves that machine translation isn't there yet. My semi-educated guess is that it's supposed to read, "I Abandoned Myself," but don't hold me to it.

The good news is that, if you find yourself in the National Diet Library in Tokyo, I have the call number for the recording and a map to where you need to ask for it. I couldn't find an extant recording online though, which made me unhappy.
posted by ob1quixote at 4:28 AM on September 8, 2015 [1 favorite] 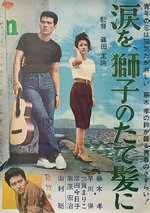