Jiro Hitoyushi, a 1970s-era sentai type superhero, recruits Kikko Hoshino, a 2000s-era magical girl type superhero at her day job as a cafe waitress, to aid him in thwarting a major scientist's collaboration with industrial spies. Five years later, Jiro is fleeing Kikko and Fuurota on a train while the non-superheroes around them protest. An interesting spin on one of the premises of Moore and Gibbons' "Watchmen": What kind of world would it be where various forms of magic, monsters, aliens and robots can coexist?

The differences from "Watchmen" could prove to be as interesting as the similarities: Japanese popular media hasn't developed superheroes in the American sense, but instead evolved a much broader range of niche heroic story subgenres involving magical powers or technology that's indistinguishable from magic.

The show's visual style is rich with old-fashioned newsprint dot screen style coloring, and makes broad and deep references into the history of Japanese graphic design and pop art from the 1960s forward.
posted by ardgedee (17 comments total)
There are a lot of small blink-and-you-miss-it touches that reward rewatchings. For example, when Jiro and Kikko are riding in the car following Grosse Augen, the camera’s POV shows the road from Jiro’s and Kikko’s POV respectively; Through Kikko’s eyes the scenery is less blurred and more detailed.
posted by ardgedee at 4:24 PM on October 22, 2015 [1 favorite]

Concrete Revolutio Ending - "The Beginning" by Yohske Yamamoto (or watch the man performing it himself)
posted by needled at 4:31 PM on October 22, 2015

I think it's pretty safely in the 'sorta-or-above' category. I've seen two of the three episodes, and I think it's got some pacing problems--it feels rushed, but that may just be inevitable when you're trying to bring it on home in 12 episodes. There was also a scene in the second episode when it seemed to me like the creators went, "Hey, what if nobody gets what we're doing? We better have one of the characters explain what we're doing." So... my guess is that it's going to prove to not always be strong on execution, but that it'll be lively and interesting anyway.
posted by Sing Or Swim at 6:30 PM on October 22, 2015

Yeah so far my feeling is that even if it ends up a failure, it's going to be a very interesting failure.
posted by ardgedee at 6:54 PM on October 22, 2015 [1 favorite]

Is this available for streaming anywhere? The description is really interesting, but I didn't see it on CrunchyRoll.
posted by codacorolla at 7:52 PM on October 22, 2015

I like it! The animation is really colorful, and the different styles for each of the archetypes is cool. All of the character designs are great too - like Kikko's transformation sequence, or Jiro's mummy arm.
posted by codacorolla at 8:42 PM on October 22, 2015

As I saids in a review on my blog, I pretty much see this as Kurt Busiek's Astro City: the anime, taking various genre archetypes and mashing them together, with the various characters introduced standing in for but not being expies of their better known "real" counterparts.
posted by MartinWisse at 10:38 PM on October 22, 2015 [1 favorite]

So there's a time skip, and after the time skip... it's not clear exactly what's happened, but Everything Is Terrible, it's hinted that former teammates regard each other with suspicion, etc. The world even looks different--the bright palette has gone all gray and rainy.

Something similar happened in the US comics industry. Before Dark Knight Returns/Miracleman/Watchmen and similar books appeared, everything was in primary colors; there was a clear dividing line between The Good Guys and The Bad Guys, no moral ambiguities, crime was punished and innocents were rescued, and so on. The fictional worlds of superheroes pretty much toed the Comics Code line. There was kind of a sea change sometime in the 80's, and afterwards superheroes were required to be tormented souls, to kill their enemies regardless of what their earlier positions on this might have been, etc.

I kind of suspect Concrete Revolutio is doing a commentary on this change in the tenor of superhero stories. Before the time skip is the Golden Age stuff, and after the time skip it's the Dark 'n Gritty Age. That's my story and I'm sticking to it, at least until I'm proven completely wrong, at which time I will deny I ever said any such thing.
posted by Sing Or Swim at 7:18 AM on October 23, 2015

Warren Ellis does something similar in a Planetary story. The Planetary team finds itself in some kind of field which is causing them to oscillate between parallel universes. As it happens all these universes have different versions of Batman in them. First they run into Corny Adam West Batman, and they think they've got him figured out, but then later they find he's changed into Scary Frank Miller Batman.

This theory that I have... which is mine... is that Concrete Revolutio is doing the same kind of thing: before the time skip it's Corny Adam West World, and after the time skip it's Scary Frank Miller World.
posted by Sing Or Swim at 7:29 AM on October 23, 2015

I have some... thoughts... on that, but will save them for the next episode discussion to avoid spoilers.
posted by ardgedee at 3:41 PM on October 24, 2015

I was completely baffled by this first episode. As in, I don't really have much of a clue what was even going on. I picked up that there was a time shift, but at any given point I had no idea where I was in the timeline. Also, I only realized in the very last scene that there was more than one female character. (There was, right?)

I don't mean this as a review or even a criticism. However, if I was this lost in the pilot, is it worth continuing on? I see comments in the new thread that the second episode is hard to follow as well. Is this just Not For Me?
posted by Ian A.T. at 3:34 PM on October 25, 2015

Rewatching the first episode helped me a lot, but I didn't feel like it was as helpful for the second episode. They have a consistent way of presenting their timeskips, but I agree they're being unnecessarily subtle with it. The only thing that's really important, it looks like, is retaining which year certain action is in (in this episode, year 41 and year 46).

I suggest letting it flow for a couple episodes. A lot of the ambiguity and withheld information is intentional, and I think you can tell from the discussions we're having that nobody's got a certain grasp on what's going on. There's a degree to which it benefits from recognition of the past characters and series it's evoking, but I don't think it's necessary. At heart it's still basically a magic-and-robots story.
posted by ardgedee at 3:42 PM on October 25, 2015

Ian A.T.: I don't mean this as a review or even a criticism. However, if I was this lost in the pilot, is it worth continuing on? I see comments in the new thread that the second episode is hard to follow as well. Is this just Not For Me?

I found the central conceit amusing enough that I just binged all four available episodes. (Plus I needed something to replace My Love Story!! on my Sunday nights.)
posted by ob1quixote at 3:49 AM on October 26, 2015 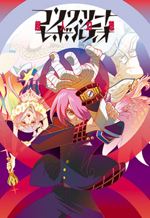