An insane general triggers a path to nuclear holocaust that a war room full of politicians and generals frantically try to stop.


AMC's film site has excellent information about this film, here's just an excerpt:

"Dr. Strangelove, Or: How I Learned to Stop Worrying and Love the Bomb (1964) is producer/director Stanley Kubrick's brilliant, satirical, provocative black comedy/fantasy regarding doomsday and Cold War politics that features an accidental, inadvertent, pre-emptive nuclear attack. The undated, landmark film - the first commercially-successful political satire about nuclear war, has been inevitably compared to another similar suspense film released at the same time - the much-more-serious and melodramatic Fail-Safe (1964). However, this was a cynically objective, Monty Python-esque, humorous, biting response to the apocalyptic fears of the 1950s.

"The witty screenplay, co-authored by the director (with Terry Southern), was based on Peter George's novel Red Alert (the U.S. title). [George's work, under his pseudonym Peter Bryant, was first published in England with the title Two Hours to Doom. Early drafts of the script were titled Edge of Doom and The Delicate Balance of Terror.] The novel's primary concern was the threat of an accidental nuclear war. Dr. Strangelove himself did not appear in the novel, however - he was added by Kubrick and co-screenwriter Southern.

"The mid-1960s film's nightmarish, apocalyptic theme was about how technology had gone haywire and had dominated humanity. The film's anti-war fears actually became a plausible scenario, shortly after the assassination of President Kennedy, the Bay of Pigs fiasco and the heated-up intensification of the Cold War and nuclear arms race. [The satirical film's release was delayed from December 12, 1963 to late January, 1964 due to Kennedy's assassination in late November.]

"However, Columbia Pictures had to include a disclaimer at the film's beginning:

"It is the stated position of the United States Air Force that their safeguards would prevent the occurrence of such events as are depicted in this film. Furthermore, it should be noted that none of the characters portrayed in this film are meant to represent any real persons living or dead."

"Every time you see a great film, you find new things in it. Viewing Stanley Kubrick's 'Dr. Strangelove' for perhaps the 10th time, I discovered what George C. Scott does with his face. His performance is the funniest thing in the movie – better even than the inspired triple performance by Peter Sellers or the nutjob general played by Sterling Hayden – but this time I found myself paying special attention to the tics and twitches, the grimaces and eyebrow archings, the sardonic smiles and gum-chewing, and I enjoyed the way Scott approached the role as a duet for voice and facial expression."

IMDb has a host of trivia for fans.

President Merkin Muffley: Gentlemen, you can't fight in here! This is the War Room.
posted by joseph conrad is fully awesome (10 comments total) 8 users marked this as a favorite
There's a lot to love about this movie. One thing I was very recently delighted to learn (while trying to find a source for the USAF freaking out about the accuracy of the B-52 cockpit shown, which the production designers mostly made up) was that the multiple Peter Sellers' roles were mandated by Columbia Pictures, who felt that his performace in Lolita was a significant part of that film's success.
posted by figurant at 8:14 PM on November 18, 2015 [1 favorite]

Huh, I had always been under the impression that Strangelove and Fail-Safe were adapted from the exact same book, but the truth is a bit soapier.

One of my very favorite Kubrick camera hijinks is the initial George C. Scott bedroom scene with the mirrors and the walking around and the belly slapping.
posted by rhizome at 8:30 PM on November 18, 2015 [2 favorites]

Starting from the 80s when Edward Teller talked Reagan into pursuing SDI -- one of the most recklessly destabilizing initiatives of the Cold War and all the more remarkable given that it was a load of BS -- I decided that Strangelove was Teller.

I've never read anything that indicated that Southern and Kubrick intended this or even that they knew of Teller, but over the years the more I learned about him, the more I despised the man.

The three most notable things about him are that he was extremely anti-communist because of his history in Hungary , he personally betrayed Oppenheimer when he secretly gave key testimony that led to the revocation of Oppenheimer's security clearance, and he was the key figure in the development of the fusion bomb. All three of these things are related -- indeed, his influence with Reagan and his promotion of SDI also fits right in there.

Teller did early and crucial theoretical work in the fusion bomb during the last years of the Manhattan Project in Los Alamos. This was always his primary interest. After the end of WWII, most of the senior Los Alamos scientists, including Oppenheimer, were not convinced that there was a need for the development of a fusion bomb, which would be more than a couple of magnitudes more powerful than the fission bomb. Oppenheimer and others were very mindful of the difficult ethics of their work and the idea of a much more powerful bomb was something that worried many of them greatly.

Not Teller. Teller was absolutely convinced that the USSR was the ultimate enemy and coupled with his own personal interest in the fusion bomb, argued at every opportunity in favor of its development. Basically, he ended up feuding with Oppenheimer about this and eventually went over Oppenheimer's head, making his case to senior administration officials. In the end, a sort of compromise was made that suited Teller perfectly -- he basically got his very own, brand-new laboratory near Berkeley, (later renamed) the Lawrence Livermore National Laboratory. There, he would lead the effort to develop the fusion bomb, making an end-run around Oppenheimer and the Los Alamos scientists who disagreed with him.

But this exacerbated and entrenched a bitter feud between Teller and Oppenheimer. This culminated in Teller giving some answers in Oppenheimer's security clearance hearing that leveraged this disagreement about the fusion bomb into something that implied that Oppenheimer was a security risk. Oppenheimer lost his security clearance and this was an enormous blow to Oppenheimer from which he never really recovered. It was one of the more notorious incidents of the McCarthy period.

And of course the US developed and built the fusion bomb, eventually creating bombs that were nearly a thousand times more powerful than those which were used on Japan. The USSR followed suit, and both sides built and deployed several thousand of such bombs, each.

Longer than any of the other senior Manhattan Project scientists, Teller remained a top government nuclear scientist and chief administrator -- with his fusion bomb credentials and ardent anti-communist history, he was naturally a favorite of Reagan's and had a personal relationship with him. In this capacity, he personally argued in favor of "Star Wars" to Reagan, outside of any of the official hierarchy, essentially unknown to any of Reagan's advisors. When Reagan announced "Star Wars" in a nationally televised speech, it was news to most of his cabinet and, in fact, much of the defense research establishment. And, as we now know, it was a boondoggle -- even today, thirty years later, tests of such systems have more than a fifty percent failure rate. More importantly, to the degree to which the Soviets actually believed that the US could develop and deploy a successful ballistic missile shield, is the degree to which it would face a do-or-die decision to first-strike the US prior to the implementation of such a shield -- because, after all, a successful shield would mean the end of MAD and that the US could first-strike the USSR with impunity. For this reason, SDI was incredibly reckless.

A US first strike was something the USSR rightly feared because Gen. Jack Ripper also has a real-world counterpart in Gen. Curtis LeMay -- who infamously argued, repeatedly, during the same period as Teller was developing the fusion bomb that the US should take advantage of its temporary strategic advantage and first-strike the USSR. Some limited casualties on the US side would be acceptable, he thought.

So although in no way did Edward Teller have barely-hidden fascist sympathies, as Strangelove did, I do think that in every other respect Teller/LeMay are very analogous to Strangelove/Ripper.

And while it's true that both the US and the USSR had quite a few procedures and protections that would make something like what happened in the movie unlikely, it's also the case that there were a few instances on both sides where things went wrong and we came close to a nuclear exchange. More to the point, there really were people that weren't so terribly different from the monsters satirized in this film. The film was, in its way, sadly realistic.
posted by Ivan Fyodorovich at 12:13 AM on November 19, 2015 [12 favorites]

Definitely one of my top 5 movies of all time. Some of my favorite bits:

The tension in the first 15 minutes or so is amazing because it takes you that long to really be sure it's a comedy! There are some light spots, but nothing really overt until Ripper's speech "to sap and impurify all of our precious bodily fluids". And even then you can't be really sure until Turgidson reads back the phone message in the war room and hesitates ever so slightly before "fluids". I've been to a couple screenings where a lot of the audience hadn't seen the movie before, and those are great because half the audience is like "WTF? I thought this was a comedy?", and the other half is just snickering quietly trying not to ruin the surprise.

When Mandrake is introduced, stepping out from behind a streaming paper printout that's taller than he is.

The ever-so-slight fourth wall breakage when Mandrake, as if fed up with all the silliness, snaps and says "Col. 'Bat' Guano, if that really is your name..."
posted by equalpants at 10:42 PM on November 19, 2015 [3 favorites]

So much great dialog in this film, perfectly encapsulating the horribly detached "logic" of the cold war..

The ever-so-slight fourth wall breakage when Mandrake, as if fed up with all the silliness, snaps and says "Col. 'Bat' Guano, if that really is your name..."

I decided that Strangelove was Teller

The line I've most consistently heard is Von Neumann, fwiw.
posted by ROU_Xenophobe at 6:43 AM on November 20, 2015

I cannot stop thinking about this film. I saw it about a month ago (for the first time, all the way through -- as with several Kubrick films, there had been numerous false starts). The performances. The story. The sets. The horror and hilarity of it all. The fascinating backstories. So many amazing scenes and lines that keep replaying in my head.

I told this to the friend who urged me to set aside the time to watch the whole thing, all the way through from the beginning. "And you'll never stop thinking about it," he said.
posted by treepour at 2:50 PM on November 5, 2016 [4 favorites]

I hadn't seen it since I was a teenager and was reluctant to see it again, but I watched it last night and it was much funnier than I remembered. Fails the Bechdel Test, of course.

I've always thought "Gentlemen, you can't fight in here, this is the War Room!" is a clunker of a line, but the people I watched it with cracked up. 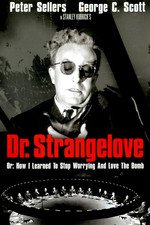