1183 AD: King Henry II holds a Christmas court, where he, his wife Eleanor of Aquitaine, and their three sons plot and scheme over who will be chosen as Henry's heir. "What family doesn't have it's ups and downs?"


Katherine Hepburn won an Oscar for her performance as Eleanor of Aquitaine. Peter O'Toole was nominated - the second time he was nominated for a portrayal of Henry II. The first was in 1964's Beckett.

Period pictures featuring real historical characters have often enjoyed great popularity among audiences, especially when they involve the grand schemes and conflicts of England's royal families. This was especially true in the 1960s, when British films experienced something of a revival, hitting big with audiences by trotting out the triumphs and flaws of the country's ruling class: A Man for All Seasons (1966), Anne of the Thousand Days (1969), Camelot (1967), Becket (1964). So The Lion in Winter was destined to succeed. Not only did it have the necessary historical intrigue but it carried the extra bonus of featuring two stars at the top of their form and some brilliant newcomers, all trading barbs and insults in James Goldman's witty and entertaining script. The movie not only delivered the requisite period detail and intrigue but wrapped it in the kind of sparkling, bitchy dialogue rarely seen on screen since All About Eve (1950).

posted by dnash (14 comments total) 3 users marked this as a favorite
I really love this movie. So very, very much. SO MANY brilliant lines, and each so marvelously delivered. Watching Hepburn and O'Toole go at each other is thrilling.

One of the best scripts ever written, with one of the most impressive casts ever assembled. Being the film debut for both Timothy Dalton and Anthony Hopkins would be impressive enough, but O'Toole and Hepburn act circles around them both.

According to the DVD commentary, Hopkins had fallen off a horse and broken his arm early in production. The look on his face introductory scene where he's fighting and goes a bit wild was reportedly the result of lifting a heavy sword over his head with a broken arm.
posted by Parasite Unseen at 12:44 PM on December 4, 2015 [3 favorites]

Also, I've had limited success suggesting to my friends who have been enjoying Empire that they should watch this, because I was about twenty minutes into Empire before I realized that it was lifting heavily from The Lion in Winter.
posted by Parasite Unseen at 12:45 PM on December 4, 2015

My favorite shot in this movie is when Anthony Hopkins realizes Dalton has betrayed him and played him for a lovesick pawn. His face goes from tough warrior prince to kicked puppy in a second.
posted by The Whelk at 1:33 PM on December 4, 2015 [3 favorites]

Speaking of that Dalton/Hopkins scene - another thing that's always impressed me about this film is how matter-of-factly it deals with that whole Philip/Richard as lovers thing. I mean, I guess in 1968 we're just a year away from Midnight Cowboy, so this film is more recent than I sometimes imagine, but still it feels like it must have been a bit bold to so clearly state that Richard the Lionheart and Philip II totally did it. (Well, Wikipedia says those two in particular did not, although Richard was probably homosexual.)
posted by dnash at 2:02 PM on December 4, 2015 [1 favorite]

Apparently it was Hepburn who insisted on Harvey to direct.
posted by the man of twists and turns at 4:01 PM on December 4, 2015

I love this movie so much. Everything about it is wonderful.
posted by Justinian at 4:21 PM on December 4, 2015

Such a great, great film. Hepburn and O'Toole merrily tearing-up the scenery together. It like watching great choreography with those two. And, though I can't prove it, I like to think it gives a fairly accurate portrayal of life back then, too. I mean, you can practically smell the dogshit in the halls.
posted by Thorzdad at 5:46 AM on December 5, 2015 [1 favorite]

I was very young the first time I watched it and of course, found the dialogue fascinating. But watching it when I was older was a revelation. The interaction between Henry and Eleanor showed what a powerful couple they had been and how that fierceness, to the outside world, getting turned on each other was just brutal; fierce love to fierce hate and intense regret. This chain of emotions gets visited on the adult children of the couple.

Alys, Richard's former fiance, Henry's mistress and one-time surrogate daughter became a physical representation of the kingdom being fought over and in the most obvious leap to fucked and helpless. Alys, a French princess fostered by Eleanor, represents a kingdom that Eleanor had adopted as part of her marriage with Henry; Richard views as his right though somewhat disinterested, and Henry grasping as a manifestation of power. This aligns, weirdly, with the historical record of Eleanor, Henry, Richard and Louis' monarchial relationships in the 12th century. Pretty intense dynamics in the houses of Plantagenet (Angevin), Capet and Poitiers.

You come away from the Lion in Winter understanding that family dynamics was very complicated in the 12th century with annulments, blended families, hostile parents and troubled children. This makes a costume drama be very relevant for a modern audience because man, life in the 21st century is complicated.
posted by jadepearl at 7:44 AM on December 6, 2015 [2 favorites]

I always felt for Geoffrey. Nobody's favorite, nobody's choice. When we are introduced to the three sons, we get John, learning how to fight; Richard in tournament and victory, and Geoff directing a battle. More like a slaughter. But when he's confronted with doing violence himself in the cellar, we can see the fear on him.
Probably most galling is his appointments as chancellor and seneschal. Mother and father recognize his skill, but won't support him to rule.
he'll be dead at 27.

Steve Hayes, the Tired Old Queen At The Movies: "The Lion In Winter."

(This is a great YouTube channel where Hayes talks about old movies like this.)
posted by dnash at 2:40 PM on December 8, 2015

This is my favourite move of all time. The battle between Henry and Elenor is one of the greatest male/female dynamics seen on screen. 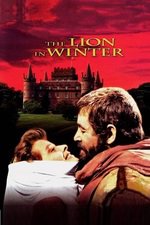