Weather Wizard returns to break Captain Cold and The Trickster out of Iron Heights, but Barry is determined to not let that happen. Meanwhile, Iris decides whether to tell Joe about his biological son.


Wow that IMDB blurb has a major spoiler I had to change for this post. But yes, SPOILERS from this point. I'm kind of excited that Wally West is black (and Kendra too for that matter), it's good to have more POC as superheroes since it's the 21st century and all. So now we know the reason behind all the drama with Francine. I have to say, I feel like they drawn that out quite a bit, even though in retrospect it was only a subplot of about 3 episodes.

I'm worried they won't handle Wells-2's deal with Zoom as well as I expect. This seems to be one of those cases of "instead of trying to betray your allies, maybe they can help you deal with the problem". But Wells-2, reflecting the show's premise of "I have to do all I can to protect my children", would probably betray Barry. But I guess that's good drama?
posted by numaner (28 comments total) 1 user marked this as a favorite
Theoretically there were other scenes in this episode besides the one in which Captain Cold visits Barry to check in because he's worried about Barry passive-aggressively shade Barry's cocoa fixings. But that's the scene I've rewatched about twenty times while cackling gleefully.
posted by nicebookrack at 9:04 AM on December 10, 2015 [10 favorites]

Yeah I gotta say Wentworth Miller seems to be really enjoying the role. It's completely different from most of his previous stuff.
posted by numaner at 9:11 AM on December 10, 2015 [4 favorites]

But Wells-2, reflecting the show's premise of "I have to do all I can to protect my children", would probably betray Barry.

I thought the series premise was "we have to lie to our loved ones, because reasons".

You know, I'm feeling nostalgic for that one Young Justice final where the team totally short-circuited the villains plans by sitting down and opening up to each other.
posted by happyroach at 9:14 AM on December 10, 2015 [5 favorites]

CAN PATTY PLEASE JUST FIGURE OUT THE SECRET IDENTITY ALREADY? IT'S DRAGGING DOWN THE PLOT!
posted by wittgenstein at 9:47 AM on December 10, 2015 [2 favorites]

I thought for sure we were going to get Barry taking her aside when she arrived and said she wanted to tell him some things. Them needing to turn it into a whole extended pondering for the audience is annoying.

I was disappointed that a show that enjoys the little verbal bones to the audience - best of both worlds? I like that - didn't have something with Wentworth Miller and breaking out of prison.
posted by phearlez at 10:53 AM on December 10, 2015 [1 favorite]

YES! This was exactly what I thought. "This is like the ending to a Doctor Who Christmas Special, an especially dumb one." I liked the episode overall, but lord almighty that was stupid.
posted by Bulgaroktonos at 11:13 AM on December 10, 2015 [1 favorite]

So my theory now is that Zoom is another version of a Wells (Earth-3?), since he has the same motivation as Wells/Thawne and Wells-2 figured out his game and speedster.

God, I hate secret crap on these shows. Just tell her already. You told Linda in like, five seconds.

Yeah, keeping this from Patty is genuinely baffling now. The rationale for a secret identity in the comics has always been, "If my costumed foes knew who my loved ones were, it would put them in terrible danger."

Patty's already in terrible danger. She's a cop. She's a member of the Metahuman Task Force - notably, the *only* other member than Joe now, meaning it's her job to confront hostile metahumans with very little backup. She's a go-getter, and frequently checks out leads on her own.

Keeping her out of the loop actively places her in more danger, because she does not know to phone Barry for rescues the way the others can. It is *maddening*. Not quite up there with 'gah unsanctioned toilet-free prison' or 'let's kill metahumans from Earth-2 without even a moment of silence,' but it's up there.

Apart from that... hm. Wentworth rocked like always. The cocoa scene was awesome. The bomb thing really was painfully stupid. Tom Cavanaugh killed it, also like always. Barry running across helicopter blades was spectacular. In short: The Flash is bugging me lately, but it's all stuff they could fix without losing any of the things that make the show fun.
posted by mordax at 12:10 PM on December 10, 2015 [4 favorites]

So my theory now is that Zoom is another version of a Wells (Earth-3?), since he has the same motivation as Wells/Thawne and Wells-2 figured out his game and speedster.

My pet theory is that Zoom is Earth-2 Joe West. If they really want to get convoluted, the Francine and Wally we've seen in the show could also be from Earth-2, with Zoom using them in some sort of Plot.

The show's writers obviously like to delve into father-son and father-daughter relationships. The murder of one of their parents is a motivating factor for both Patty and Barry.

A fight between an evil Joe speedster and Barry would be traumatic for Barry. The revelation that he's a villain in an alternate universe would be a game-changer for the E-1 Wests and for Barry.
posted by zarq at 12:55 PM on December 10, 2015

My money's on Earth-2 Henry Allen for Zoom. And/or future Wally West, since Barry has been set up as a perfect target for Wally's ire by "stealing" Wally's father/sister/life.
posted by nicebookrack at 1:12 PM on December 10, 2015 [2 favorites]

I'm pretty sure the head writer's kid got a drone for his birthday and has spent all his time buzzing his family, crashing through windows, and pissing off the neighbors with it. "That's it!" the head writer growls and grabs the thing out of the sky, shouting, "I'M TAKING THIS FOR WORK!!"

...Cisco should just admit that he's a wizard, he's not doing science, he's doing magic with electronics. Literal magic, and using sciency sounding words as an incantation.
posted by FallowKing at 2:00 PM on December 10, 2015 [4 favorites]

Zoom is Earth 2's Leonard Snart and the finale is going to be both Snarts drinking cocoa together and being arch.
posted by shakespeherian at 6:22 PM on December 10, 2015 [5 favorites]

I am intensely curious whether Wentworth Miller is simply unable to not have sexual chemistry with any creature* he spends a scene with, or whether the Flash writers and/or Miller are deliberately playing Captain Cold as queer. Because this Captain Cold sleeps hugging Barry's face on a heart-shaped "Nemesis" pillow.

He just kinda smolders with smug hotness, somehow.
posted by jenfullmoon at 7:00 PM on December 10, 2015 [1 favorite]

Never has the smug, self-satisfied smirk of an asshole been more adorable, except on the face of my cat.
posted by nicebookrack at 7:20 PM on December 10, 2015 [2 favorites]

How long did the production designer spend finding the perfect mug
posted by shakespeherian at 7:56 PM on December 10, 2015 [2 favorites]

An hour at Pottery Barn?

Man, every time Mark Hamill does the Trickster voice I start looking around for the Batman animated series Joker. Especially when he's not on screen.
posted by immlass at 8:15 PM on December 10, 2015 [3 favorites]

I was sure Barry would have to unmask to convince Patty not to shoot Weather Wizard. He did drop her first name, maybe that'll clue her in eventually, but still, dammit show.

Ah well. No matter how bad that subplot gets, it can't take away the cocoa scene. God, I hope Legends of Tomorrow is just Wentworth Miller chewing on scenery for 42 minutes a week.
posted by Holy Zarquon's Singing Fish at 5:53 AM on December 11, 2015 [4 favorites]

I wanted it to happen so bad too, just as a "WTF" kind of scene, where Barry is totally freaking out at first (what are these feelings??) and then speeds out of the house, and then we see Iris getting all hot and bothered.
posted by numaner at 8:13 AM on December 11, 2015 [1 favorite]

YES! This was exactly what I thought. "This is like the ending to a Doctor Who Christmas Special, an especially dumb one."

It is 100% exactly the "pulled back to their dimension" garbage from the Dalek thing that got Rose (sort of) off the show. Yet somehow even more stupid (but on the upside no crying Tennant so there's that).
posted by phearlez at 9:25 AM on December 11, 2015 [1 favorite]

Can we please send Cisco back to middle school? He's such a tool. I regret every episode that we rewound killing him off.
posted by ktkt at 3:54 AM on December 12, 2015 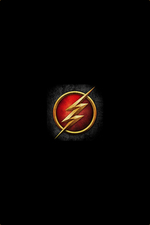