A mysterious death in Los Angeles brings SSR agent Peggy Carter to the Golden State, where she dives headfirst into a chilling conspiracy that bridges Hollywood and cutting-edge scientific research.


Peggy reunites with Jarvis and Sousa in the SSR's Los Angeles office, and it turns out that each brought their own romantic interests to the party -- which means we finally get to meet Mrs. Jarvis, and she does not disappoint. Meanwhile, the New York SSR office finally has "Dottie Underwood" in custody, but their big collar gets tied up in a power play between the Reserve and the FBI.
posted by Holy Zarquon's Singing Fish (37 comments total) 1 user marked this as a favorite
Only the first episode because that's all I was able to watch on Hulu before work. Also, I'm aware I got the title (The Lady In The Lake) wrong; could a mod fix that?
posted by Holy Zarquon's Singing Fish at 8:46 AM on January 20, 2016

Just stopping by to say that pretty much everything about this episode was perfect. Great characters and action, lovely chemistry between pretty much everyone who spoke, great snark and humor and finally some real emotional range to Peggy with very fine acting by Atwell.

The show feels incredibly solid, like it knows exactly what it wants to do and how to do it and it doesn't feel like some suit has meddled with it. Just so good!
posted by Brandon Blatcher at 9:36 AM on January 20, 2016 [1 favorite]

What struck me most about the episode was how funny it got without undercutting the overall mood. Jarvis vs. Bernard The Devil In Pink, his wife, the relentless tap-dancers....I can't think of a single gag that didn't land. And episode 2 has something that Jay Edidin on twitter called a "Sex Batmobile," so I have high hopes for that to continue.

Great character work for all the main cast, too, definitely a cut above the first season there. Everybody feels more like a complete character now, even Dottie. And on the same note I like that we're going to keep following the New York office without Peggy, since we've only ever seen those characters in relation to her.
posted by Holy Zarquon's Singing Fish at 10:49 AM on January 20, 2016

Only caught the opening twenty minutes so far (the rest tonight while I iron) - but damn is this show good. That opening fight scene was great and I wish AOS would figure out how to do action like that.
posted by nubs at 11:14 AM on January 20, 2016

I know he's from the past and all, but Bernard really needs his own twitter account.
posted by robocop is bleeding at 12:05 PM on January 20, 2016 [2 favorites]

Are we taking bets on whether Sousa's fiancé is a spy? Is Bernard a plant from Howard? !

I was totally on board for this ep (a little less so for the second one.) Essentially, I'm really happy to watch Peggy and Jarvis (and Mrs. Jarvis), as well as Peggy and Dotty interacting, and there were lots of funny bits, but I admit to not really caring about the plot right now.

I was waiting for Sousa's nurse girlfriend to be revealed as something but if they plan to go that route, they're waiting.

Man, Tony did not have a very good role model.

Are we taking bets on whether Sousa's fiancé is a spy?

I don't think there's much doubt that she is more than she appears.

Is Bernard a plant from Howard? !

For now I'm going to assume that Bernard is a Terrigen enhanced flamingo sent by Jiaying to watch over Peggy.
posted by homunculus at 1:36 PM on January 20, 2016

Or Jarvis is completely right and we're actually seeing the MCU debut of Mephisto.
posted by Holy Zarquon's Singing Fish at 1:41 PM on January 20, 2016 [1 favorite]

More on Zero Matter and why it looked familiar: "Agent Carter" Season 2 To Include Tie-in To "'Doctor Strange' Universe"
posted by homunculus at 1:49 PM on January 20, 2016

The production values have gone up a notch! Thoroughly entertaining, though more Dottie would have been fun. And kudos for including a POC scientist with absolutely no reference whatsoever to his ethnicity.
posted by pjsky at 5:37 PM on January 20, 2016

All I could think of for the "toxic substance" was Vonnegut's Ice-9.

After I thought that I kept mishearing "isodyne" as "ice nine" and then I wondered if that was on purpose somehow.
posted by flaterik at 6:18 PM on January 20, 2016 [1 favorite]

That's what some people don't get about comics. It's a deep fucking bench of interesting characters.
posted by Cool Papa Bell at 6:19 PM on January 20, 2016 [2 favorites]

It's funny because they were also riffing on a Madam Masque type of character on Agents of Shield. But it was played with only a few glancing mentions beyond the actual mask thing, so they can do the character more emphatically here.
posted by PussKillian at 7:01 PM on January 20, 2016

I can't believe it only just NOW occurred to me to look for Peggy/Dottie fic.

Dottie's heart emoji eyes at Peggy will now be my internal monologue gif for all the awesome women-only scifi ships this season: Pettie, Clexa and Cosine.
posted by Unicorn on the cob at 9:32 PM on January 20, 2016

I didn't take a close look, but those pins - the one Dottie tried to steal and the ones everyone was wearing in the Council meeting - any chance the symbol on those matches one of the symbols in Hydra's history that Fitz was looking up on Agents of Shield?
posted by nubs at 10:09 PM on January 20, 2016

there's a serious lack of Carter/Martinelli here, and it's a problem

I see that Angie's been downgraded from "recurring" to "guest", and it's a crime

on the other hand, I do like Lotte Verbeek quite a bit, so there's that. I don't quite trust her character for some reason. I probably should since she's apparently been with Jarvis for forever, but she feels suspicious to me.
posted by vibratory manner of working at 11:37 PM on January 20, 2016

I am not trusting Ana Jarvis either because of the questions she asked Peggy (that was probably ep2 though).
posted by girlhacker at 11:42 PM on January 20, 2016

any chance the symbol on those matches one of the symbols in Hydra's history that Fitz was looking up on Agents of Shield?

Yes, the inverted V--or whatever it is supposed to be--is the symbol Fritz worked out, used by the precursor organizations behind Hydra and the symbol used by the space program that sent Will Daniels to the alien world as a sacrifice. I thought that order had evolved into HYDRA by this point, so it is interesting that these conspirators are not using the HYDRA logo but rather the inverted V. Maybe the Hydra logo is too hot? Or this group is the secret cabal remaining hidden behind Hydra, supporting its aims but keeping a distance?
posted by insert.witticism.here at 11:50 PM on January 20, 2016 [1 favorite]

on the other hand, I do like Lotte Verbeek quite a bit, so there's that. I don't quite trust her character for some reason.

She played pretty much the same sort of character (quirky yet practical, asks a lot of pointed questions) on Outlander and that didn't turn out so great for the tough, fish-out-of-water dark haired female WWII vet lead either.

(Is there Peggy Carter meets Claire Randall fanfic out there? Asking for... a friend.)
posted by robocop is bleeding at 3:43 AM on January 21, 2016 [1 favorite]

Maybe the Hydra logo is too hot? Or this group is the secret cabal remaining hidden behind Hydra, supporting its aims but keeping a distance?

Post Cap WWII might mean the actual Hyrda logo is a little too hot. Or this is a splinter/different tentacle of Hydra; either one is good with me. Frankly, I'm just glad they aren't introducing another shadowy secret organization with nefarious aims.
posted by nubs at 10:03 AM on January 21, 2016 [1 favorite]

I just love Dottie's new look with the darker hair and the softer make-up. She looks so much better as a brunette than as a harsh, brassy blonde.
posted by sardonyx at 3:54 PM on January 21, 2016

tautological: All I could think of for the "toxic substance" was Vonnegut's Ice-9.

That was my first thought, except it wasn't all-consuming like "real" Ice-9.

Lots of distrust for new female characters, but I'm hopeful that the surfing front-office gal gets a bigger role this season.
posted by filthy light thief at 8:34 AM on January 22, 2016 [1 favorite]

Lots of distrust for new female characters, but I'm hopeful that the surfing front-office gal gets a bigger role this season.

The surfing front-office gal has a name and its Rose Roberts.
posted by Brandon Blatcher at 8:40 AM on January 22, 2016

I loved the scene where Dottie gets the drop on Thompson so much I had to pause and count the ways that he is a moron.

Oh, Peggy said she wasn't afraid of her, and you want to continue that, even though you have absolutely no idea what Peggy was talking about? Good plan, dude. Want to borrow a scarf?
posted by misfish at 3:14 PM on January 24, 2016 [2 favorites]

Rose Roberts is apparently the 1940's version of Penelope Garcia (in her redhead phase). I think it'd be adorable if they could meet and become friends.

I'm relieved that Ana does exist and so far we don't have any wanky jealousy issues from Peggy hanging out with Jarvis.

I do like that scientist dude, but I wonder how easily he'd be asking her out IRL.
posted by jenfullmoon at 9:14 PM on January 27, 2016

I do like that scientist dude, but I wonder how easily he'd be asking her out IRL.

I wondered about that too, but it's a sci-fi comic book show. There is physics-defying science ice stuff in this episode. The backstory includes a literal superman and a version of WWII that includes laser guns, a super strong guy with no face, and an artefact of immense power from a different planet populated by handsome space Vikings.

So I guess I'm willing to give them a little leeway on historical accuracy wrt racism.
posted by His thoughts were red thoughts at 9:44 PM on January 27, 2016 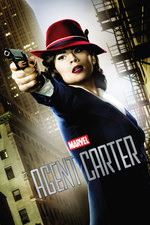