Book three of Frank Herbert's Dune series follows the young twin children of Paul Muad'dib as the navigate a changing Arrakis and a dangerous web of galactic political conspiracies.
posted by cortex (11 comments total) 3 users marked this as a favorite
(Just a quick note to apologize for how late this has ended up being. I've reworked the rest of the calendar at a month out from today for the remaining three books and I'll get those posted on time hell-or-highwater.)
posted by cortex at 9:16 AM on January 26, 2016

So! It was really interesting revisiting this book; while I've read the first one several times and Messiah twice, from here on out these are my first re-reads for the rest of the series. And what's neat for me there, with this one, is seeing the throughlines into God Emperor that Herbert laid down, that weren't all that obvious to me the first time out not knowing what was coming. In the absence of the context of that later book, a lot of Leto's tortured portentiousness here feels pretty abstract, rather than have a clear weight of future circumstance to it.

There's something very Last Temptation about some of that, too; Leto's struggle against future visions of comfort and domestic happiness as he's being drugged and held captive by Gurney et al in the corrupted sietch, his confrontation with Paul as a (somewhat sympathetic) parallel to a battle of ideological will with an Adversary.

I had remembered the sandtrout armor/skin, and where that goes in the long run in the next book, but I hadn't remembered exactly how it was justified as this unique thing that happened to Leto, that it was more than just that he dared to do it. I like that it turned out to be, ironically, Alia's plot to dose him with spice to control/neutralize/sympathize him that led him (in his already unusual Atreidean biochemistry and BG cellular control) to have the notionally unsurvivable spice saturation in his blood which kept the sandtrout from rejecting him and sloughing off.

What I don't recall, and am looking forward to keeping an eye out for, is whether there's any reference in the later books to any of the other powers in the universe attempting to replicate that. Perhaps it's something Leto kept a secret; perhaps the Bene Gesserit were never quite able to guess at how it happened, or found the idea of Abomination so unconscionable that even they wouldn't attempt to create their own hybrid. Etc. But for this book I liked that there was such a delicate thread leading to this terrible strangeness. And I liked that it was, as it ought to be, a little gross and body horrorish.
posted by cortex at 9:29 AM on January 26, 2016 [3 favorites]

What I don't recall, and am looking forward to keeping an eye out for, is whether there's any reference in the later books to any of the other powers in the universe attempting to replicate that.

I think in the later books (SPOILERS) it's basically not possible, because sandworms no longer exist for most of Leto's reign. And even when there are sandworms again, doesn't the Bene Gesserit control Rakis? I can't really imagine the Bene Gesserit, or any of the major powers, for that matter, wanting to create another Tyrant. The last time the BG tried to engineer a super-powerful individual, they got Paul. They presumably learned a very harsh, extended lesson about placing too much power in one person whom they might not be able to control.
posted by Enemy of Joy at 9:22 AM on January 27, 2016 [2 favorites]

So I read this book for the first time in 2015, and I do agree: without the context of God Emperor (which I've never read), Leto's musing feels tortured and vague.
posted by flibbertigibbet at 10:23 AM on January 27, 2016 [1 favorite]

And even when there are sandworms again, doesn't the Bene Gesserit control Rakis?

It's more that something happens to the sandworms after Leto's death that makes replicating Leto's trick potentially dangerous.

They presumably learned a very harsh, extended lesson about placing too much power in one person whom they might not be able to control.

Indeed: they learn to do it properly! Although, some factions of the Sisterhood disagree with how that all turned out.
posted by kithrater at 2:48 AM on January 31, 2016

Alia Atreides Never Had A Chance

No one mentioned the beefswelling. How is this possible?
posted by mrcrow at 4:26 PM on September 27, 2017

I think my brain (and maybe everyone's brain?) has filtered that out.
I do not remember that at all.

I had to google it.
Here's the page in question.

but also here is a fun discussion of unusual euphemisms from fiction, which refers.
posted by Just this guy, y'know at 6:40 AM on September 28, 2017 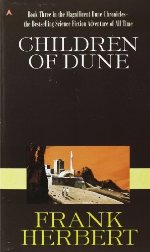