Two 1990s teenagers find themselves in a 1950s sitcom where their influence begins to profoundly change that complacent world.


NYTimes: Entertaining as it is, ''Pleasantville'' has its own black-and-white side that extends beyond the visual. The teens from the 90's, especially Jennifer/Mary Sue, bring a missionary zeal to awakening the benighted 50's types from their slumber. They wind up introducing truth, art and passion into Pleasantville in ways that make color bloom selectively on townspeople who have turned three-dimensional. By the time these newly enlightened characters have been labeled ''coloreds'' and have stirred up a conservative backlash, the movie has seriously belabored its once-gentle metaphor and light comic spirit. Like ''The Truman Show,'' with which it overlaps a bit, ''Pleasantville'' has more inspired trickery than depth.

Roger Ebert: "Pleasantville" is the kind of parable that encourages us to re-evaluate the good old days and take a fresh look at the new world we so easily dismiss as decadent. Yes, we have more problems. But also more solutions, more opportunities and more freedom. I grew up in the '50s. It was a lot more like the world of "Pleasantville" than you might imagine. Yes, my house had a picket fence, and dinner was always on the table at a quarter to six, but things were wrong that I didn't even know the words for. There is a scene in this movie where it rains for the first time. Of course it never rained in 1950s sitcoms. Pleasantville's people in color go outside and just stand in it.

AV Club: Pleasantville falters a bit in its second half, tipping its hat a little too obviously with a subplot involving the intolerance of the remaining black-and-white citizens toward the "coloreds." Its failure to show any consequences of the town's fortunate fall from grace is questionable, as well; the world grows more complex, but it still seems incapable of allowing anything truly bad to take place. That might be too much to ask of a fable, however, and to concentrate on the minor faults of a fable as beautiful and unusual as Pleasantville would be missing the point.

The most liberal movie of all time: Pleasantville
posted by MoonOrb (12 comments total) 6 users marked this as a favorite
There are some good thoughts on this movie and privilege in this post. (Which I found through this FPP.)

I remember liking this movie, though I also recall it being anything but subtle with its message. The Jeff Daniels/Joan Allen subplot does good work towards making the film more than just a teenage rebellion comedy.
posted by Wretch729 at 7:01 PM on February 17, 2016 [2 favorites]

I never saw this as a kid, only catching it years later, but I absolutely love it. I mean, it has a blatantly silly premise, but the directors somehow manage to wring some spectacularly beautiful moments out of it, like Jeff Daniels seeing actual art for the first time or Joan Allen's slow awakening and eventual active rebellion or the townspeople seeing rain for the first time. It's those simple moments of joy that really carry the movie.

Also, structurally it's a pretty weird movie. The comedy in the first third of the movie, as we're introducing the character's to the rules of this ridiculous world, is really what pulls you in before it starts slowly unveiling the allegory and you begin to realize there's a little more to the film that you would think.

The allegory was strong with this one, but on the other hand I feel people need to be reminded to not idealize the past like all the time because that lesson still escapes people. Besides the climax, which was a little sloppy, I don't think the allegory really ever got in the way of telling a good story either, which is why the heavy-handed messaging never bothered me that much. Also, there were some subtler messages as well, like the film's sex-positivism without titillation/objectification which was pretty refreshing to see.
posted by john-a-dreams at 8:38 PM on February 17, 2016 [2 favorites]

I was 12 or 13 when I saw this which was exactly the right age for it; the allegory felt incredibly deep to my friends and me at the time and we definitely came out of it feeling enlightened and smart and liberated and all that good stuff. Nothing about the "coloreds" label felt heavy-handed or cliche - au contraire! We all thought it was just devastatingly clever. Like meese, I haven't had the heart to revisit it because I loved it so much at the time. Weirdly I remembered Kirsten Dunst being in it instead of Reese Witherspoon, probably because in the intervening years my recollection of this movie has blended together with Spider-man owing to Tobey Maguire being in both, opposite a perky female character named Mary Something.

Does anyone else still stand in the middle of an empty room and demand "Where's my dinner?"
posted by supercrayon at 12:15 AM on February 18, 2016 [5 favorites]

The entire latter half of this movie is Joan Allen doing things almost painfully erotically while other people do pointless things around her.
posted by Etrigan at 7:59 AM on February 18, 2016 [7 favorites]

I saw this movie when it first came out, when I was in college. I liked it well enough.

It's a movie I've come back to over and over again through the years; whenever it's on TV I HAVE to watch it. At this point, I'd easily put it in my top-10 fave movies of all time.

Does anyone else still stand in the middle of an empty room and demand "Where's my dinner?"

One of the things that finally helped me to really grok the concept of privilege and especially the resentment that comes from telling people they have it was an article (which I'm absolutely certain I could not find now) that referenced precisely this scene.

It's like... Listen, it's not that William H. Macy is a capital-letters Bad Dude. He's just used to not having to even think about whether dinner will be ready for him when he gets home. To the extent that suddenly not having dinner ready plunges him into a Kafka-esque existential quagmire of doubt over something that is, ultimately, pretty small potatoes. Anybody without that privilege is like, "Yeah, ok, just make yourself a fuckin' sandwich, bro", but he's literally never even had to consider the possibility that he might have to make his own sandwich.

(Which comes with the obvious-but-I'm-going-to-be-explicit-anyway caveat that to render privilege-based resentment explicable is definitely not to render it excusable. Ain't no goddamned reason he can't make his own sandwich.)
posted by tobascodagama at 1:58 PM on February 18, 2016 [10 favorites]

Actually, the article I was thinking of is probably exactly the one that Wretch729 already linked to.
posted by tobascodagama at 1:59 PM on February 18, 2016

I liked this movie in general, but I loved the bit leading up to the burning tree, especially because the tree bursting into flames was both hilarious and just a bit of a non-sequitur, and the follow-up--where the firemen don't react at all to Toby Maguire yelling "Fire" but immediately rush out when he says "Cat"--is the perfect capper.
posted by Halloween Jack at 9:43 PM on February 18, 2016 [3 favorites]

What sells the dinner scene is Macy never gets mad. He's not angry that dinner's not there... he's just so absolutely confused about its absence.

Such great performances all around in this one.
posted by GhostintheMachine at 5:56 AM on February 19, 2016 [3 favorites]

I remember the website for this movie seemed pretty neat at the time. It started out black and white and as you browsed through it it gradually turned to color. In 1998 that was not the kind of thing you generally saw on the web.
posted by litlnemo at 3:14 AM on February 22, 2016 [1 favorite] 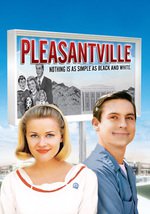