Young women begin to vanish from a popular nightclub, resulting in a territorial war between Major Crimes and the Special Operations Bureau due to the kidnapping of one of SOB's own members. Meanwhile, Newly appointed Deputy Chief Howard deals with the aftermath of his heart attack, and Rusty's mother struggles with personal issues, stressing the bond between mother and son and surrogate mother.
posted by filthy light thief (2 comments total)
Still not loving all the SOB stuff - the focus always seems to be on the law enforcement characters rather than the civilians. Maybe it's an unavoidable side effect of them trying to use these episodes to introduce & establish the spin-off characters, that the victims/criminals of the week get underwritten. They killed off the other kidnap victim to further Officer Kate Sherman's storyline; to show how much danger she was in, how resourceful/heroic she was. But it still leaves another episode where civilian death was necessary to forward the character arc of someone in SOB, and given that the events in Ferguson, MO have given us fresh new examples of how little value US law enforcement personnel place on the lives of the people, it's not something I need to see in fiction.

I'm also leery of human trafficking stories that focus on young blond Americans being sold to foreigners, pretty sure the traffic generally moves in the other direction.

On the Major Crimes side of things though, another great Rusty & the Sharons episode. The writers have really nailed how horrifyingly self-centered someone in the throes of addiction can be.
posted by oh yeah! at 6:39 AM on August 17, 2014 [2 favorites]

Mary McDonnell & Jonathan DelArco were both at Dragoncon this past weekend - mostly there for their genre work, but they did a Major Crimes panel together, and it's up on youtube now but broken out into many parts.

I haven't watched the videos yet (I was there in person, I asked the question about G.W. Bailey.) It was a fun panel - they seemed to be great pals and very enthusiastic about the show, and I thought our questions were all good. (I thought about asking them about how much influence/involvement the actual LAPD has over the show, but it was such a happy room I didn't want to be the killjoy, and that's really a writer/show-runner question anyway.)
posted by oh yeah! at 8:47 PM on September 4, 2014 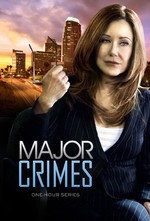