Frank Bigelow, told he's been poisoned and has only a few days to live, tries to find out who killed him and why. Full movie on YouTube found here.


Film Noir of the Week: Influenced by a 1930s German thriller from genre icon Robert Siodmak, 'D.O.A.'s existential bent and underlying dread become apparent as early as the opening credits , when Bigelow is brusquely thumbed down an endless, shadowy hallway towards Homicide Division by a preoccupied cop. Throughout the film we are presented officers who are literally and figuratively distant. They are outside Bigelow's orbit, too disinterested to be relevant. When Bigelow concludes his story for them at film's end, a detective in the background can be spotted napping.

Filmsnoir.net: Expressionist lighting accents the hysteria and panic as Bigelow desperately races against time to track down his killer. With a pot-boiler plot and a terrific hard-edged portrayal from O’Brien, this is not only a gritty on-the-streets in-your-face melodrama, but a nuanced film noir where a random innocent act is a decent man’s un-doing.

efilmcritic: There are better noir films out there, of course, but most of them were A pictures working with more money and a more relaxed schedule courtesy of the big studios. D.O.A., meanwhile, is a classic example of great filmmaking on a budget - tighten the pocketbooks, but open up the ideas. This is a brilliantly inspired story, briskly told with thrills and chills and plenty of mystery movie cool.
posted by MoonOrb (2 comments total) 3 users marked this as a favorite
It kind of boggles the mind how so much complicated plot could be crammed into 83 minutes. I still have no idea what happened, and I've seen it twice now, and all I know is that Bigelow was in the wrong place at the wrong time, totally out of control of his fate.

I liked the jazz club scene especially-that's the moment he crosses over from the safety of the world he knows to the madness of the new reality of his life and the hip, modern kinetic music is perfect for it--he's definitely not ready for it, but it's the new sound and it's here to stay, like it or not.
posted by MoonOrb at 8:25 PM on February 26, 2016

This was fun - dialogue was pretty melodramatic, for sure, but the plot was very fast-paced! The jazz club was definitely the highlight.
posted by destructive cactus at 2:39 AM on March 5, 2016 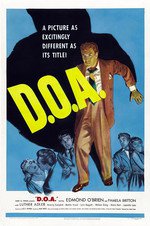