A Puerto Rican former convict, just released from prison, pledges to stay away from drugs and violence despite the pressure around him and lead on to a better life outside of N.Y.C.


Rolling Stone: There's a haggard integrity to Al Pacino's erratic performance as Carlito Brigante, a Puerto Rican drug dealer who gets out of jail on a legal technicality in 1975 after doing five years on a 30-year rap. It's been Carlito's way since he was 14 to fuck with the law to grab the American dream of "clothes, cars and pussy." Now his blood is up for a new plan: going straight. But the streets of Spanish Harlem are meaner than when he left them, and they're pulling him back in.

NYTimes: "Carlito's Way" is supposedly fueled by Carlito's dreams, which are to open a car rental business in the Bahamas (really) and resume his romance with Gail (Penelope Ann Miller), the kind of woman who calls him Charlie. But the film's real heart is in the very places Carlito speaks of escaping: the seedy social clubs and slick dance palaces where the story's main action unfolds.

Roger Ebert: In "Scarface," the hero's ambitions led only to power, lust and greed. Here something more complicated is taking place; Carlito has grown enough to see himself from the outside, to understand some of the mistakes he made, to plot a way to escape from what seems like the inevitable fate of people in his position. Yet step by step and scene by scene, his fate is sealed.

Slant: In its own way, the film is just as stylized a take on the crime genre as something like Warren Beatty’s Dick Tracy. The hairstyles, the shirt cuffs, the music, the cocaine—it’s not so much to recreate an era as to hit all the semiotic cues that evoke that era as our popular consciousness is supposed to see it. We’re not meant to experience these scenes and images as realism, but as a rush. The scenes between Carlito (Al Pacino) and Gail (Penelope Ann Miller) are touching and expertly calculated illustrations of deep-seated romantic feeling: rainy streets, late night coffee shops, dim apartments. The climactic cat-and-mouse sequence should raise pulses into the triple digits. The generic intensity of the filmic experience works as a nice counterbalance to the fatalistic gravity of the story construction. The former imbues the latter with the proper feeling of tragedy (inevitable ends!) and the latter imbues the former with a purpose beyond sheer emotional thrills.

Why Carlito's Way is the most underrated gangster movie

Looking back at Carlito's Way

The Discarded Image, Episodes one and two

Trailer
posted by MoonOrb (3 comments total) 1 user marked this as a favorite
I actually think this is superior to Scarface. A lot of classic films take a pretty basic view of their topic, but later in their careers, filmmakers will want to revisit those ideas with a more mature and nuanced view. The subject of this story is simply more interesting, in my opinion, than the rise to power in Scarface.

Despite the flash-forward at the beginning, I still hope that he's going to get away at the end. It's cleverly crafted; they created this tense atmosphere of inevitability throughout and then set the climax as a race to escape that seems like it could work against all odds. I fall for it every time.

I agree with the criticism that Gail is a weak link. The character seems like she was pulled from an earlier era. In this film with so many male characters who are murderers, thieves, dealers, and pimps, it's supposed to be a mildly scandalous surprise to him that she's now a erotic dancer. This film spends some time on the topic of trust, and changing values, and perceptions of others, and it all seems very smooth and considered when it's about men, but in the scenes between Carlito and Gail, it doesn't sit right with me. I suspect there was an earlier draft in which Carlito planned to run away with Steffie, and the Gail character didn't exist; if you imagine that movie, you imagine a movie with a more consistent tone in which the relationships between Carlito, David, and Benny make even more sense.

The performances in this film are a real joy, and are what bring me to watch and rewatch. I'm not sure what else can be said about them that wasn't in the links. I would like to compliment the incidental music. It's perfectly on point during the climactic shootout, and the way it tiptoes and pauses during the pool hall "reloading" scene is outstanding.
posted by heatvision at 5:29 AM on February 28, 2016 [1 favorite]

I agree that this is superior to Scarface. It's more mature and restrained, as is Pacino's performance. I'm not fond of his Tony Montana, so Carlito is a vast improvement.
posted by wabbittwax at 5:55 AM on February 29, 2016

Probably my favourite Pacino performance. A great film.
posted by turbid dahlia at 2:57 PM on February 29, 2016 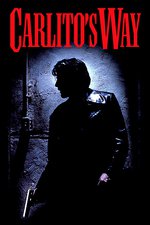