An FBI agent goes undercover to catch a gang of surfers who may be bank robbers. Patrick Swayze (R.I.P., buddy) still had it, Keanu Reeves was yet to become a caricature of himself, and it was impossible at the time to imagine that someone in 2015 would think a remake would be a good idea. 100% pure adrenaline.


NY Times: Just as she did in "Blue Steel," the director Kathryn Bigelow observes the peculiar complicity that develops between a law officer and a seductive criminal. And once again Ms. Bigelow moves so fast and so far with this idea that her film (with a screenplay by W. Peter Iliff) eventually spins out of control. But "Point Break," though it's anything but watertight where plotting is concerned, again reveals Ms. Bigelow's real talents as a director of fast-paced, high-adrenaline action. Whenever the flakiness of "Point Break" threatens to become lulling, Ms. Bigelow wakes up her audience with a formidable jolt.

Among the film's especially energetic sequences are a furious two-man chase on foot through a heavily populated neighborhood, shot vigorously with a hand-held camera; sustained and amazing sky-diving scenes guaranteed to make the palms sweat, and a police raid on a house that becomes a wild melee and turns a lawnmower into a potentially deadly weapon. This last episode, and others like it, prove definitively that testosterone-crazed movie violence is by no means the sole province of male directors.

Rolling Stone: What saves Point Break from wipeout is Kathryn Bigelow's direction. Though the film lacks the formal beauty and allure of her Near Dark and Blue Steel, Bigelow keeps the action percolating in high style.

Roger Ebert: Bigelow is an interesting director for this material. She is interested in the ways her characters live dangerously for philosophical reasons. They aren't men of action, but men of thought who choose action as a way of expressing their beliefs. That adds an intriguing element to their characters, and makes the final confrontation in this movie as meaningful as it can be, given the admittedly preposterous nature of the material.

Bigelow and her crew are also gifted filmmakers. There's a footchase through the streets, yards, alleys and living rooms of Santa Monica; two skydiving sequences with virtuoso photography, powerful chemistry between the good and evil characters, and an ominous, brooding score by Mark Isham that underlines the mood. The plot of "Point Blank," summarized, invites parody (rookie agent goes undercover as surfer to catch bank robbers). The result is surprisingly effective.

Point Break: a homoerotic classic
posted by MoonOrb (10 comments total) 5 users marked this as a favorite
I like Ebert's review and agree with it. (Except the part where he says "Bigelow and her crew are also gifted filmmakers"... is that the "articulate" of the female film directing world? I also feel like a male director would get more personal credit for virtuoso action filmography instead of this "Bigelow and her crew" though it is admittedly more fair.)

Even if you don't like Point Break, it helped produce the world that gave rise to Hot Fuzz, and for that we owe a debt of gratitude to everybody who worked on the film.
posted by Pope Guilty at 11:22 PM on February 29, 2016 [5 favorites]

I don't understand why there was a second remake since 'The Fast And The Furious' was already close enough to a Point Break remake.
posted by coust at 6:13 PM on March 1, 2016

I just re-watched this on Christmas with a bunch of family because we were looking for a movie and I was offended they even tried to remake this piece of film perfection. It's beautifully shot and completely ludicrous. I love how Patrick Swayze and Keanu Reeves's characters perfectly understand each other in their ability and desire to go ALL IN in every experience. When Keanu just JUMPS OUT OF THE PLANE to catch Patrick, he's riding that ultimate wave, with no thought about how it will end. And at the end they have that moment of understanding on the beach and Keanu lets him go to ride that wave he's chased for a lifetime...

And at the end they have that moment of understanding on the beach and Keanu lets him go to ride that wave he's chased for a lifetime...

I've always loved this movie - there really is something about it that makes it not just a mindless action fest. And I think that last link in the post about the homoerotic undertones gets at what I mean. There's a tension in the relationship that builds between Johnny and Bodhi that's very unlike most action movies.

Keanu gets hated on a lot in his career, but I've always felt he has a great screen presence, and has a particular gift for characters that have stuff going on inside them that they can't articulate. Like, the classic socialization that men aren't supposed to talk about feelings. But that doesn't mean they don't have them, so when they do, how do they handle them? I think Keanu is great at having this sense of "bottled up emotion."

I have no interest in the recent remake of this, because I'm just sure they won't get that unspoken attraction thing right.
posted by dnash at 9:04 AM on March 2, 2016

I just don't even understand the point of the recent remake, given the changes they made (based on the trailer). The FBI agent says these people are extreme athletes, like him, so we don't have Johnny as a washed-up player of one sport who has to pick up something new. We wouldn't therefor have the final sequence where Bodi asks him if he's still surfing, code for whether his life and perspective was changed in a permanent way (rather than just being a con for undercover work). Part of what made Point Break: The Real One so good was that Johnny gets inside this scene and finds a lot to like; his perspective is changed along with his growing daring.

And I Nth the woo Lori Petty. I don't know if this movie passes the Bechdel; I doubt it. But she's a self-assured character with her own agency and little interest in bullshit.
posted by phearlez at 9:54 AM on March 2, 2016 [4 favorites]

I watched some of this a few months back, and I thought the cinematography was really elegant! The way those waves are filmed and lit in its light is beautiful.
posted by yueliang at 12:24 AM on March 3, 2016 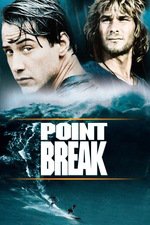