A robot malfunction creates havoc and terror for unsuspecting vacationers at a futuristic, adult-themed amusement park.

Timeout: Despite faults (chiefly a dispersal of its energies), a wonderfully enjoyable fantasy about a futuristic holiday resort offering robot worlds of exotic sex, romance or violence amid the licence of ancient Rome, the gallantries of a medieval chateau, or the gunslinging frontier town. Best and most fully realised of these worlds is the Western, with Brynner (brilliant) as the robot gunman required to die, bloodily, every time a greenhorn tourist challenges him to the draw. Until, that is, the robots begin to malfunction - or rebel: only the computers that designed them know exactly how they work - and the Brynner machine sets out, now part mad killer and part Frankenstein monster, in quest of revenge. Great stuff.

denofgeek: One of the greatest aspects of the film is its pacing. Slowly but surely, the sense of impending doom is instilled upon the viewer as the virus that takes over the robots is demonstrated in various subtle, but no less important, displays of unresponsiveness – a snake that bites when it shouldn’t, a ‘pleasure’ model that will not respond to a guest’s advances...

NYTimes: Crichton the director seems to have had more fun with the film than Crichton the writer, whose screenplay can offer us no better explanation for the sudden, bloody robot rebellion than an epidemic of "central mechanism psychosis." This basic facetiousness is partly obscured by the vivid and sometimes amusing dimension of the film's anecdotes, which are mostly about the peril of the guests when make-believe gives way to reality.

Trailer
posted by MoonOrb (25 comments total) 5 users marked this as a favorite
One of the features of this movie that I liked is that there was no meaningful explanation for how or why things went wrong; it was sufficient that they did. Interestingly, this seemed to be a source of frustration for some critics at the time, but this seems perfect to me: if Westworld is the future, we can foresee, surely, that things can go wrong, even if we're unable to foresee exactly how. Our inability to predict (and, by extension, control) this seemingly foreseeable breakdown is one of the most chilling things of all about the movie.
posted by MoonOrb at 6:20 AM on April 5, 2016 [4 favorites]

This movie is where I decided that James Brolin is actually the lovechild of Josh Brolin and Christian Bale.
posted by phunniemee at 7:07 AM on April 5, 2016 [2 favorites]

To me, it's a great premise with a story that doesn't go anywhere: people go to a high tech robot fantasyland; robots malfunction; most people die.

lol cardboard in Jurassic Park the dinosaurs were real, not robots. Toootally different.
posted by phunniemee at 7:37 AM on April 5, 2016 [9 favorites]

Yul Brynner, man, Yul Brynner. This was like the second movie to introduce me to good ol' Yul. The first was The Ten Commandments (of course). Anyway, watching this as a kid, Yul was so freaking scary as the gunfighter. And that end-part? Where he's fascinated by the torch as seen through his Yul-Robot Pixel-Vision®? Amazingly creepy robot-pathos activate!

Anytime I see Yul Brynner I think of his frozen-faced Westworld countenance, and The Ten Commandments line "So let it be written! So let it be done!"

Instead of a novelization, the producers published the screenplay for this film in paperback. It came with a fantastic foreword by Michael Crichton. The whole package, script and foreword, is like 120 pages, and it's basically a semester of film school (complete with German academic jargon, guides on how to get around labor disputes, and "never shoot a picture like I did" advice).

A couple of scenes which were written but never shot:
posted by infinitewindow at 10:39 AM on April 5, 2016 [5 favorites]

That's pretty much the only story Crichton wanted to tell: Scientists, who think they are soooooo smart, fuck up and now everything is fucked. Fuck.
posted by sideshow at 11:33 AM on April 5, 2016 [6 favorites]

a corporate presentation of a planned expansion to Delos

Something happens at the end, but it isn't the explosion of violence in this film. Maybe the robots all shut down and everybody is sad. It's been a long time since I have seen this film.
posted by maxsparber at 12:23 PM on April 5, 2016 [2 favorites]

A friend of mine met Crichton. It was one of those book fair-thingys where all the writers show up to pimp their latest. Anyway, Dom (my friend) sat at the same lunch table as Mike. He said Mr. Crichton was most pumped about being The Tallest Popular American novelist. Does that mean anything? Anyway, Mike was a tall motherfucker.
posted by valkane at 12:50 PM on April 5, 2016 [1 favorite]

OhI loved this movie as a kid. Now I'm gonna have to rewatch. As much as things go wrong, there seemed to me to be a bit of the show "Humans." There's a scene where a tourist is trying to violate a robot and she actually fights back. It seemed to suggest to me that the reason Yul Brynner's character to malfunctions is that the repressed emotion overwhelms his programming and he fights back. Of course all of this is based on my very flawed memories as a kid.
posted by miss-lapin at 2:34 PM on April 5, 2016

Brynner's gunslinger is pretty much the prototype for the Terminator: determined, emotionless, relentless.
posted by We had a deal, Kyle at 6:45 PM on April 5, 2016 [1 favorite]

When I saw the movie for the first time, I was impressed with Crichton's full hearted embrace of the idea that, as soon as it became practical, people would have sex with robots.
posted by jwgh at 6:21 AM on April 6, 2016 [2 favorites]

Brenner's gunslinger is pretty much the prototype for the Terminator

Something happens at the end, but it isn't the explosion of violence in this film. Maybe the robots all shut down and everybody is sad. It's been a long time since I have seen this film.
posted by maxsparber at 12:23 PM on April 5 [2 favorites −] Favorite added! [!]

Seriously though, I have an academic interest in learning more about this film.

This has always ranked high on my list of favorites. Some of the effects seemed cheesy even when I was a kid, but oh that Yul!

While it's a plausible candidate for a remake (yes HBO, I know), somehow I seriously doubt it can ever live up to the original.

This and Andromeda Strain were both high points of Crichton, along with Jurassic Park Of course.
posted by pmurray63 at 2:59 PM on April 7, 2016

It's been a long time since I saw this.

I remember the Roman world as being extremely frank about things, in a way that I don't think a movie today would be. If they remade this movie today they would go all out to try to titillate the audience, the things going on in the orgy world we be ultra ultra over the top and stylized, yet actually pretty soft core. Versus like, oh, what goes on in the roman world? Well a bunch of average-y looking people get drunk and fuck a lot. I think the mere act of presenting average people having sex would be shocking in todays plasticky doll people world.

And if they remake it, murderbot should probably be a Native American (how much more pointed would it have been...) Though Westerns have lost their resonance. IIRC there is no "sci fi" part of the park in the movie, but the movie itself is like a scifi park for the viewer, the third act should probably be like a mini Maximum Overdrive deal.

Hm I don't think I ever saw the 1976 Futureworld. CG is finally good enough they could probably make a Dream Park movie, except SyFy would do it and it would suck, if they haven't already...
posted by nom de poop at 3:59 AM on April 11, 2016 [1 favorite]

nom de poop: IIRC there is no "sci fi" part of the park in the movie, but the movie itself is like a scifi park for the viewer...

Nope, the three worlds in the original movie were all "lawless" past worlds, where the visitor are placed in a position of power over the robots. The sequel added Future World (you go into a simulated outer space, ski on Mars, things like that) and Spa World, where you can feel/ get rejuvenated. It was a weird addition, and not really featured in the film beyond a few stray moments.

And if anyone sees this and doesn't already know, there's a good TV series under way now from HBO (FanFare series page), set some 30 years after the park opened (if one character's comment is accurate). I also posted Futureworld to FanFare, if you've seen it and want to chat about it.
posted by filthy light thief at 11:03 AM on October 17, 2016 [1 favorite]

Brynner's gunslinger is pretty much the prototype for the Terminator: determined, emotionless, relentless.

Schwarzenegger has actually said his performance as the Terminator was modeled after Brynner's as the Gunslinger.
posted by DirtyOldTown at 2:01 PM on October 17, 2016 [1 favorite]

This is a good movie and it holds up. But it's several orders of magnitude less ambitious and thematically dense as the new tv show. This is a good movie about Our Creations Gone Wrong! While it is by no means just a Frankenstein rehash, it pretty much tops out thematically at, "Will our quest for lifelike things kill us?"
posted by DirtyOldTown at 2:03 PM on October 17, 2016

Instead of a novelization, the producers published the screenplay for this film in paperback. It came with a fantastic foreword by Michael Crichton. The whole package, script and foreword, is like 120 pages, and it's basically a semester of film school (complete with German academic jargon, guides on how to get around labor disputes, and "never shoot a picture like I did" advice).

That sounded interesting so I checked to see if there was a copy on Amazon and it's currently $550 a copy.
posted by octothorpe at 2:10 PM on October 18, 2016

> Internet Detective Squad Activate!
> Seriously though, I have an academic interest in learning more about this film.
> ACADEMIC! 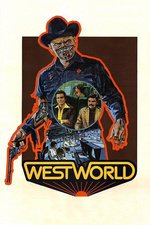